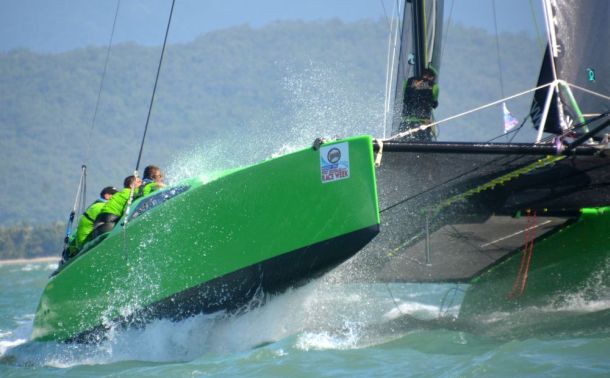 The first day of the Mickey Ink Port Douglas Race Week was a write off, with PRO John Graham putting up the AP over A flags at 1pm. It was one of those days that was marginal – the big boats could have handled the 25 knot winds which were gusting just over 30 knots but the multihulls and smaller boats would have had a miserable time.

Today conditions were a little better but the strong 20-25 knot south-east trade winds, combined with a short chop of around a metre in height, still tested the 32 entrants.

An early casualty was David James' Seawind 1000 Two Easy, which found the conditions anything but. Rounding the bottom mark for the first time in the first race, the skipper noticed a big area of torn stitching in the main and made the decision to pull out. The sail has already been repaired and the boat will be out tomorrow.

However, the most spectacular effort of the day was the “launching” of a crew member from the J24 Viva La Beaver. After turning the top mark, a bit of a muddle on the foredeck distracted skipper Peter Chapman momentarily, causing a gybe. Crew member Amber, who was serving as a human gybe preventer, was catapaulted straight off the boat. She was quickly picked up and racing resumed.

Also out of the eight-boat multihull division early was the striking, green-coloured Grainger catamaran Barefoot. Owner Warren Innes said it was a combination of small things rather than a major problem that caused the DNF. “There were a couple of rope clutches not doing what they're supposed to, little things like that. We decided to go in and fix them so we're ready to go in the passage race tomorrow.”

Out in front of all divisions was another multihull, the Nacra 36 Malice owned by Malcolm Richardson. With a big square-topped carbon main she was easy to spot as she raced through the Division One yachts which had started first. A major benefit of lapping the fleet, according to the crew, was being first back in the bar.

In Division One, Doug Ryan's Beneteau 44.7 Shazam won the morning race but was beaten by Joel Bruce's Farr 40 Guilty Pleasures in race two.

Like the multihulls in Division Three, there was a dominant boat in the Performance Cruising Division. Campbell Corbett's Adams 12 Jimmie triumphed in both races. In Division Four the sportsboats had the edge on the J24s with a Thompson 7 Ketchup (Steven England) taking the morning race and an Elliot 7.8 X2 (Peter Vincent) victorious in the afternoon.

Full results will be published at http://portdouglasraceweek.com.au/results-2015/ when computed.

The Port Douglas Yacht Club proudly displays a story from the local paper which has a headline: “The clubhouse built for fun” to celebrate the 20th birthday of the club back in 2013. When racing had finished, the clubhouse quickly lived up to its name as the stories of the day grew taller and the spinnaker snafus and overlaid marks drifted out of consciousness. This is an event that combines the two things yachties love best – hard sailing and a good party afterwards.