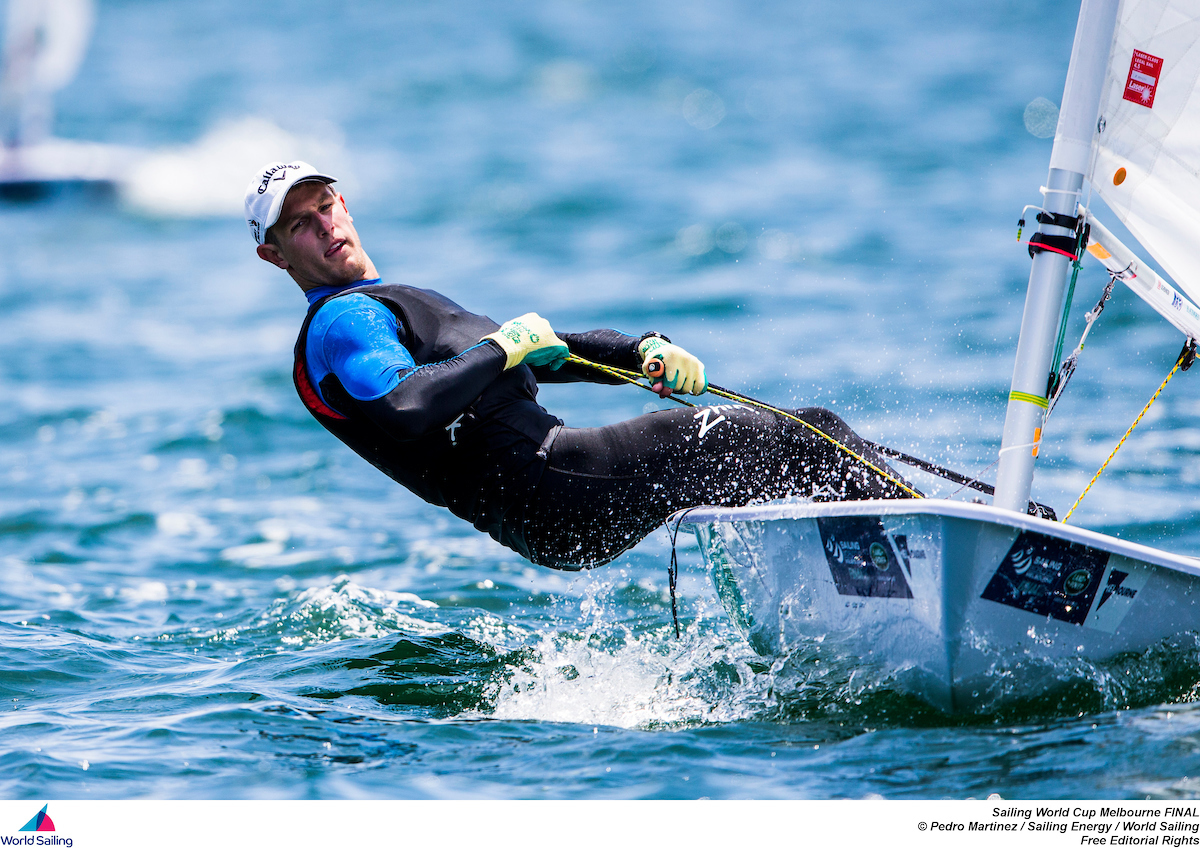 Day four of racing at Sailing World Cup Melbourne has got away under strong conditions, with breezes of 20+ knots experienced across Port Phillip Bay.

Matt Wearn enjoyed the strong winds today, winning both races in the Laser fleet.  Wearn is currently leading overall, three points ahead of Cypriot Pavlos Kontides.  Rio Silver medallist, Tonci Stipanovic finished second in both today’s races and is currently lying third overall, while Australia’s Tom Burton is in fourth overall.  Burton scored a 12 and a 5 in today’s two races.

“It was a good day out there,” said Wearn after racing today.  “We were postponed in the morning because there was too much wind, but we managed to get a couple of races in this afternoon.  It was quite a fresh south-westerly, around 20-25 knots at times, and it built as the afternoon went on.

“We’ve had quite close racing up until now.  But with the stronger conditions and longer races, it was a bit more spread out today.  I was happy to come away with the two wins.

“I plan to keep doing the same thing as I’ve done all regatta and hope to finish the series off strong and take a good points lead going into the medal race on Sunday.”

Jake Lilley continues to lead the Finn class after six races. Lilley won both of today’s races and has a four point buffer over Great Britain’s Ed Wright.

Mat Belcher and Will Ryan had another perfect day, winning both of today’s 470 men’s races.  The Aussies have a near perfect score card, with a second place their worst result.  They take a 10 point lead into tomorrow’s final races of the preliminary series.

In the women’s 470 Carrie Smith and Jaime Ryan had a first and a second in today’s two races and are currently lying second overall.  They are only four points behind the Austrian team of Vadlau/Ogar going into the final races of the preliminary series tomorrow.

In the Nacra 17, Rio 2016 Olympic Silver medallists, Jason Waterhouse and Lisa Darmanin hold the lead going into their medal race tomorrow. It was a mixed day for Waterhouse and Darmanin, winning the first race of the day, then crossing the line in sixth place in the second.  They recomposed themselves and came back in the third race to finish second.  The Nacras have now completed nine races and the Olympic medallists take a six point lead into the final day.

Only one race was completed in the 49er today, and Australia’s Sam and Will Phillips won that race ahead of fellow-countrymen David Gilmour and Joel Turner.  The Phillips brothers are currently leading the 49er fleet overall, while Gilmour and Turner are in sixth place overall.  The 49ers will sail their medal race tomorrow.

Meanwhile in the 49erFX there was no racing today.  Australia’s Tess Lloyd and Eliza Solly lead that fleet going into tomorrow’s medal race, ahead of fellow-Aussies Haylee Outteridge and Nina Curtis.  Caitlin Elks and Hayley Clark are currently in fifth place overall.

In the Laser Radial, Australia’s Ashley Stoddart is fifth overall after crossing the line in fourth and seventh in today’s two races.  There are three races scheduled for the Laser Radial tomorrow.

In the RSX Women’s event, Joanna Sterling is lying eighth overall having finished today’s three races in eighth, ninth and sixth.  The medal race will also be completed in this class tomorrow.