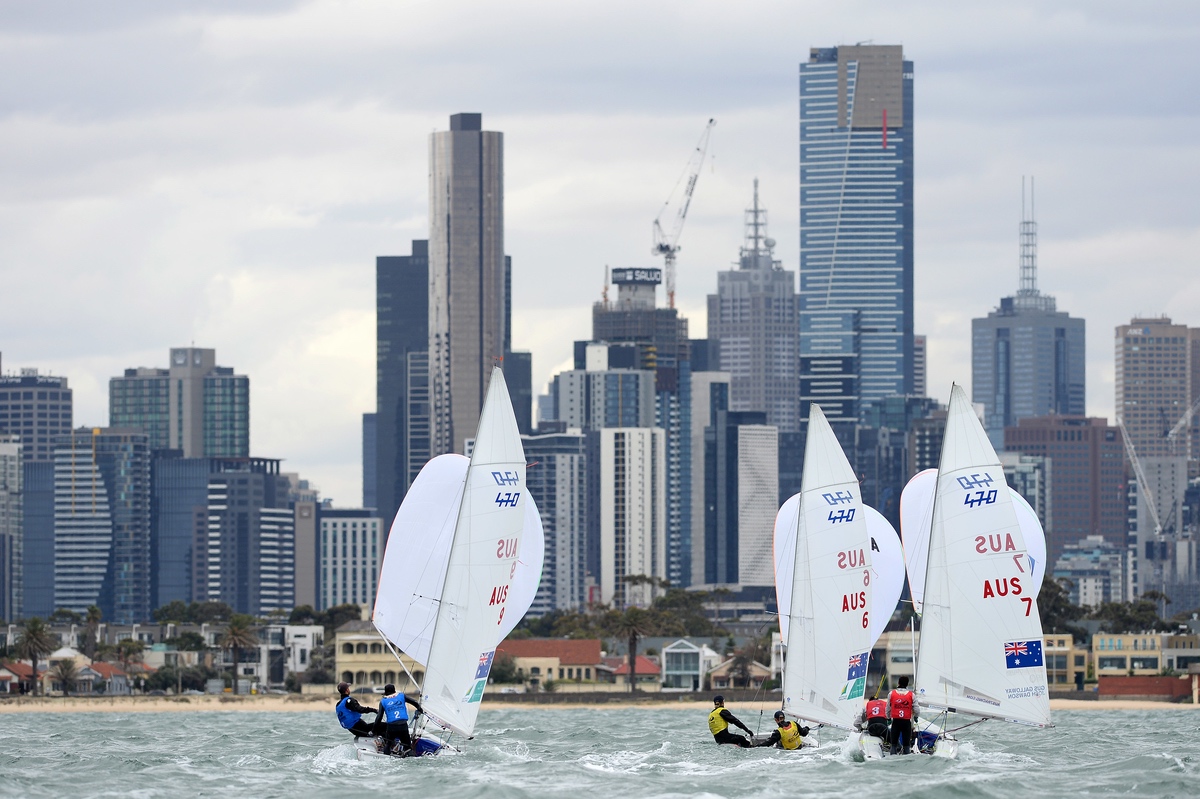 Racing was attempted in a couple of classes in the 15-20 knot winds blowing across the top of Port Phillip with the 470, Finn and 2.4mR classes managing to get one race in for the first session of the day. The remaining fleets were then held ashore due to the 30 plus knots breeze and only the SKUD18 and Sonar completed a race in the afternoon session.

“When we started the race, it was perfectly fine with around 15-16knots. But by the second downwind it was starting to get a bit windy and we had a bit on in the last lap. And of course after the racing it got even worse,” 470M sailor Alexander Conway (NSW) described the day.

Patrick and Alexander Conway continue to lead the 470 fleet after posting another race win today despite the challenging conditions:

“We just managed to win the race. We got a big right-hander and were fourth or fifth at the top mark. The guys in front had a big lead but we managed to get it back,” Alexander Conway added.

Racing in a mixed fleet, Australian Sailing’s Carrie Smith (WA) and Jaime Ryan (QLD) encountered carnage and capsized, but still managed a second place to defend their lead in the 470 Women. Sasha Ryan (QLD) and Aurora Paterson (VIC) won the race and are ranked second.

“It was pretty hectic out there today, a typical Melbourne blow-out and we managed to bend our pole and our mast,” Jaime Ryan said.

And Carrie Smith added: “We decided to do a nice cart-wheel downwind when we were winning and beating all the boys, which was a bit disappointing. But overall we are happy that we survived the day and that we could race against the boys and have a bit of fun at the same time. We’re in one piece and that’s the main thing.”

In the Finn, Australian Sailing Squad’s Oliver Tweddell (VIC) won the only race of the day.

“We got a pretty decent race in and it was only in the last downwind that we had a 30plus knots score come through. It was a bit hectic but lots of fun too,” local Oliver Tweddell said.

With predictions of rising wind strengths for the afternoon the Principal Race Officers called off racing for the day at 4 p.m. across all classes and with results in the other classes standing from yesterday, Thursday, 10 December 2015.

Saturday, 12 December will be the penultimate day of racing in the Olympic classes with the top-ten Medal Races scheduled for Sunday, 13 December 2015.

Racing out of the Royal Yacht Club of Victoria on the Williamstown side, the Paralympic classes all managed to get one race in on their penultimate day with racing concluding tomorrow, Saturday, 12 December and with all three Australian Sailing Team crews in medal contention.

Paralympian and 2015 Para World Sailing Bronze medallist Matt Bugg (TAS) finished second in the one and only race in the 2.4mR and is ranked third overall after a total of five races. Teammate Neil Patterson (TAS) is ranked 11th.

Racing will resume on Saturday, 12 December from 11:00 a.m. (schedule to be confirmed).