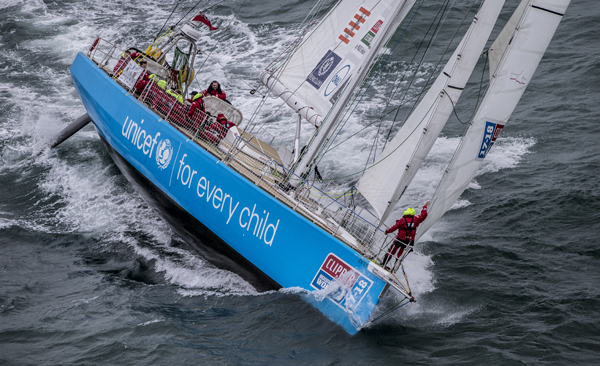 Strong tides running North have divided the fleet tactically overnight, with the front of the pack heading close inshore to seek faster routes.

Dale Smyth, skipper of third placed team Dare To Lead, reported: “It was an interesting night with the front of the pack all deciding to head close inshore to Wales in order to escape the north flowing tide.”

The gap between first and last place has widened over the last 24 hours, with 68 nautical miles separating the teams and a group of four teams pulling away from the pack. At the top of the leader board is Unicef which has crept four nautical miles ahead of Visit Seattle this morning despite sitting in second place overnight.

Dare To Lead and Sanya Serenity Coast are just two nautical miles behind and with the top four still in eyesight of each other, it is a closely fought battle as the teams head towards Northern France.

Dale Smyth added: “The front four leaders all made a break away as the tide reversed.”

Despite fickle winds dominating the second day of racing for the Clipper Race fleet, good progress has been made as teams reach their first milestone of the race; bidding farewell to the Irish Sea until July 2018.

Roy Taylor, Skipper of PSP Logistics, currently in seventh position, reports: “At last we have broken free of the Irish sea and put it to our transom for a year.

“We are now making good progress towards the south west to intercept the westerlies that will give us a good passage across Biscay.”

For the HotelPlanner.com team, however, tactical lessons were learnt as the front of the fleet pulled away. Skipper Conall Morrison reported: “Conditions in the Irish sea have been changeable so far and I’m pleased that we are now rounding St David’s Head in North Wales.

“In retrospect, I’m not sure that we have made the best tactical decisions, however each one remains a learning point. Onwards and upwards!”

The changeable conditions faced by the fleet mean that frequent sail changes are still required which is physically demanding for crew.

Crew members on board Greenings have had a busy night with the most sail changes of the fleet. In his report today, Skipper David Hartshorn said: “An interesting few watches have passed. We have gone from our lightweight kite (Code 1) to Windseeker. From Windseeker, we went to Yankee 1 this afternoon and changed down to Yankee 2.

“It cost us a place but there needs to be a special mention to Charlotte Hauser, our lead bow crew member, who doesn’t stop giving 100% or laughing. She is currently sporting a ‘headsail change hairdo’. Not sure it will catch on!”

Overnight, some teams were rewarded for their persistence when encountering a pod of dolphins swimming amongst phosphorescent plankton, creating one of nature’s most mesmerising light shows. Leg 1, the Atlantic Trade Winds Leg is 6,400nm long, the equivalent of ten Fastnet Races, and this morning, Skipper David Hartshorn was noting that they were just 1.7% of the way through the journey.

Wendy Tuck, Skipper of Sanya Serenity Coast notes: I’m happy to be back out to sea, but sometimes it does seem a bit surreal that our next land fall will be Punta Del Este, Uruguay…”

NB: All positions were correct at time of publishing. For the latest positions visit the Race Viewer