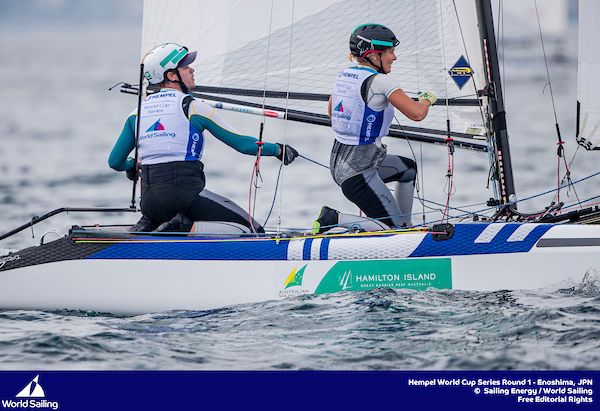 Brazil’s Martine Grael and Kahena Kunze got off to a perfect start in the 49erFX as racing commenced at the first regatta of the 2020 Hempel World Cup Series in Enoshima, Japan.

Fresh from last week’s gold at Ready Steady Tokyo, the Olympic test event, the Brazilians could not have asked for a better day, winning both of their races in their bid to retain the title they won one year ago.

After an idyllic weekend that was blessed with clear blue skies and a stable breeze in the mid-teens, the waters of Sagami Bay were somewhat calmer on Tuesday. It took until the latter part of the afternoon for a reasonably stable 5-9 knot south westerly breeze to fill in and fleets headed out from 14:00 local time.

Five fleets completed their scheduled races with the remaining fleets one race short. These will be added to Wednesday’s schedule.

Grael and Kunze, Rio 2016 Olympic gold medallists, are targeting a second gold medal at the Tokyo 2020 Olympic Games. Hempel World Cup Series Enoshima is held on the same racing areas that will be used at Tokyo 2020 and provides a clear insight into who will claim the coveted Olympic medals in just under one year’s time.

If previous results are anything to go by, the Brazilians are on track to claim a second gold.

They won the World Cup regatta in 2018 and followed it up with gold at JSAF Enoshima Olympic Week. Their recent test event victory has heightened their status as favourites but they know not to get too complacent.

“The success of last week was pretty questionable,” commented Grael. “The other girls sailed really well and we had a tough week.”

“But it’s consistency, I would say,” expressed Kunze. “We only won one race in the test event. It changes so much here because one day there’s a sea breeze and the next it’s coming from the shore so you have to be adaptable to be successful.

“Our training partners, Alex [Maloney] and Molly [Meech] from New Zealand and the Norwegians, [Helene Næss and Marie Rønningen] are doing super the good. The British [Charlotte Dobson and Saskia Tidey] also did great last week.

“There’s always a few teams having ups and downs so you always have to be prepared and be careful.”

Consistency was at a premium in the 49er. Tim Fischer and Fabian Graf (GER) were the only team to post three single digit scores and they share top spot with Dominik Buksak and Szymon Wierzbicki (POL) after three races.

At Ready Steady Tokyo, Stipanovic finished outside of the top ten and was not happy with his week, “The last regatta was so bad. Only on the last day I sailed good with a first and a third. All of the other races were so so bad. I’m happy with a five and a three today, it’s like it was two first places.”

Stipanovic is three points clear of Pavlos Kontides (CYP) and explained his day, “There are more boats and it is for sure much harder [than the Olympic test event]. Today I had two good starts and I managed to sail clear all the time. I was always at the front at the top mark. I had some bad downwinds but at the end I’m happy.”

Japan’s Manami Doi grabbed first overall in the Laser Radial with a 3-5 scoreline. Ready Steady Tokyo winner Emma Plasschaert (BEL) won the race one and followed up with a tenth which positions her in second. Malaysia’s Nur Shazrin Mohamad Latif occupies the bronze medal position.

The light wind masters were always going to prevail in the RS:X fleets and that was so.

Peina Chen (CHN) has all too often dominated the Women’s RS:X in light air and a bullet in the first race of the week showed signs she has not wavered. A ninth, her discard, and a second followed and she is first overall. Wai Yan Ngai (HKG) and Yunxiu Lu (CHN), winner of Ready Steady Tokyo, follow.

Angel Granda-Roque (ESP), Mateo Sanz Lanz (SUI), Mengfan Gao (CHN) and Pierre Le Coq (FRA) jostled for position in the Men’s RS:X fleet and are separated by three points. Apart from Granda-Roque’s 11th from race two, which he discards, the quartet did not place outside of the top four between them. The Spaniard holds the early lead.

Two races were completed in the highly competitive Nacra 17 fleet. Ben Saxton and Nicola Boniface won race one and backed it up with a fourth to lead. Nathan and Haylee Outteridge (AUS) were also consistent, sailing their way to a 5-3 scoreline, and occupy second. Quentin Delapierre and Manon Audinet (FRA) took the day’s other race win.

Croatia’s Josip Olujic won the sole Finn race of the day, beating Nicholas Heiner (NED) and Joan Cardona Mendez (ESP). Hempel World Cup Series Enoshima acts as the Finn Asian qualification regatta for Tokyo 2020 and China’s He Chen, James Dagge (HKG) and Ahmad Ahmadi (IRI) are all fighting for it. Chen finished in 17th, followed by Dagge in 19th and Ahmadi in 21st.

The Japanese Sailing Team is used to seeing a compatriot lead in the Women’s 470 fleet as Ai Kondo Yoshida and Miho Yoshioka have dominated for many year’s. However, a new name tops the tree. Yuki Hayashi and Chika Nishidai took the single race win in the 19-boat fleet and lead.

In the Men’s 470, the sole race victory was snapped up by Paul Snow-Hansen and Daniel Willcox. Japan’s Kazuto Doi and Naoya Kimura and Italy’s Giacomo Ferrari and Giulio Calabrò followed.

Tomorrow’s forecast is for strong breeze which may delay or even postpone racing but the schedule is for a 12:00 start.

By Daniel Smith – World Sailing
Results and standings after day 1 of the Hempel World Cup Series regatta in Enoshima, Japan: