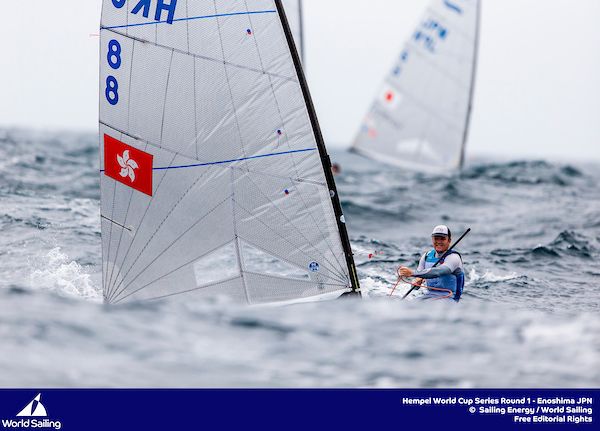 As the seven remaining Olympic fleets were postponed early on in the day, the RS:X and Finn sailors hit the water and were put to the test in winds gusting 30 knots and waves 2.5m high.

France’s Charline Picon, Rio 2016 Women’s RS:X Olympic gold medallist, described the day as, “a bit of a war” with sailors expressions and body language reflecting that statement as they returned to shore following the racing.

Nonetheless, the 24 Finn sailors and 31 Men’s and 24 Women’s RS:X racers relished a new challenge on the Tokyo 2020 Olympic waters.

After two days of competition, Picon has demonstrated her all round excellence. On day one, in very light breeze, Picon expertly worked her board, using her physical strength to record three fourth place finishes. As the heavier breeze kicked in on Wednesday, the French Olympic champion took the challenge head and recorded a second and a third.

“It was amazing racing, with a lot of rain,” commented Picon. “Sometimes there was ten knots with no planing and then it was up to 30 knots and a bit of a war.

“During the first upwind I only saw one sail up with everybody in the water. It was just a race fighting against yourself. But I enjoyed it a lot.”

Picon became a mother after Rio 2016 and enjoyed time away from the RS:X. She made her competitive return in April 2018 and has been working to evolve her all-round skillset, “Since I had my baby, I have had to improve in strong winds. The key is to have pleasure in these conditions and have no fear. This year, since Palma [Trofeo Princesa Sofia Regatta], I’ve had a good sensation and taken a lot of pleasure in strong winds and this has really helped my results today.”

Picon’s second and third puts her one point off the Chinese leader, Yunxiu Lu, who won the opening race of the day.

“I had a big crash and opened my leg. I finished the race and I hope it will be better tomorrow. At the upwind mark when I turned my sail round, I did a catapult capsize and don’t know where I ended up.

“Emma and I then had a good battle on the final downwind which was great.”

Yunxiu tops the leaderboard on 12 points followed by Picon on 13 and Peina Chen (CHN) on 16.

In the Men’s RS:X, the fleet completed three races after the Women’s RS:X as the breeze decreased in strength. Louis Giard (FRA) excelled winning two races and claiming a second. He holds the overall lead on 14 points. Pierre Le Coq (FRA) claimed a (5)-3-5 scoreline and is three points off Giard in second.

China’s Kun Bi also found consistency in the strong breeze. A third, first and a second positions him in third overall.

Nicholas Heiner’s (NED) face was lit up like a beacon when the Finn fleet returned to shore having completed a single race. When asked to describe the day in a word, he commented, “I’ll go two – pretty awesome.”

“It was amazing conditions, especially downwind,” commented Heiner. “We were the only class out there having fun.”

The Finn fleet were the first to hit the water and after some delays as the wind shifted, they got a race underway at 14:20 local time.

Cardona was a comfortable winner, leading from start to finish as Heiner moved up from sixth at the first mark to second at the end.

On what it took to succeed, Heiner commented, “At the top mark you had to find the groove in the chop and once you got going it was amazing fun. The best part was almost the trip back to the harbour at a great angle and going downwind in nice waves. It was an awesome day and a shame we didn’t do more races.”

The forecast was always for big winds and waves and Heiner prepared adequately, “You have to make sure you eat enough in the Finn when there’s a chance of free pumping. But, to be honest, 12-14 knots is probably harder than these conditions because you’re focusing more on steering the boat. I would almost say it was an easier day than a medium wind day but this was so much fun.

“For sure conditions were tough and it was a great battle against the elements. You’ve got to have fun with a big smile on your face then you’ll go better in these conditions rather than sitting afraid.”

Thursday sees an additional race added to every fleets schedule, minus the RS:X who will sail three. Racing is scheduled to start at 12:00 local time and the forecast is for a more favourable with 14-16 knots of breeze.