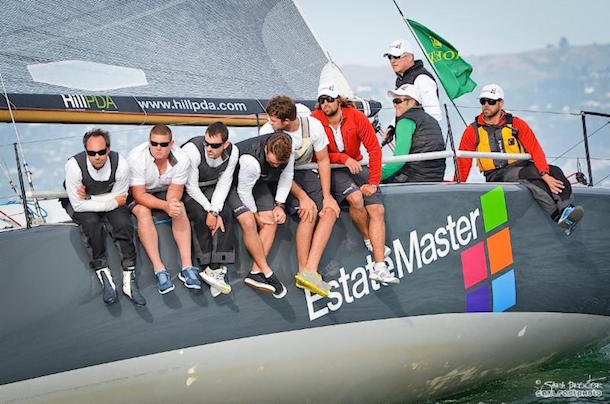 The Italian boys aboard Alberto Rossi's Enfant Terrible are hoping for a repeat of the boat speed and crew work they displayed while winning the Midwinter Championship. Class president Martin Hill and the Estate Master team arrive from Australia looking to build on their impressive second place finish at the 2014 Rolex World Championship. Gordon Leon and his amateur crew sailing Foil are trying to represent host Cabrillo Beach Yacht Club by capturing the Corinthian Division.

Those are just some of the interesting storylines to follow as the Farr 40 International Circuit prepares for the second event of the season. A strong fleet of 15 boats has gathered at Cabrillo Beach Yacht Club for the 2015 West Coast Championship, being held May 27-30 on the Pacific Ocean.

Cabrillo Beach Yacht Club, located in San Pedro on the Palos Verdes Peninsula, hosted the 2014 Farr 40 Midwinter Championship and received rave reviews from organizers and competitors alike for the warm welcome it provided the class.

“We are very happy to be back at the Cabrillo Yacht Club. We had a great time here last year; the hospitality of the club was fantastic and the involved club members did a wonderful job,” said Wolfgang Schaefer, vice president of the Farr 40 class. “Last year we met the local Corinthian fleet first time in Cabrillo. That was a great experience and we were impressed with the level and the competition on the race course. I am pleased to say that this event was exactly in line with the spirit which made the Farr 40 Class so special and famous.”

Cabrillo Beach Yacht Club is currently home to three Farr 40-footers. Foil and White Knight, owned by Gordon Leon and Zoltan Katinszky, respectively, are longtime members of the club. Twisted, a San Francisco-based boat skippered by Tony Pohl, has moved to Cabrillo Beach for the summer and is participating in Wednesday night racing.

Leon smiled broadly when asked what type of conditions the fleet can expect off Cabrillo Beach in late May. “I can describe it with two words: Breeze on! We have a very consistent sea breeze that usually pipes up to around 15-20 knots by mid-afternoon. If the wind is blowing from the 240 to 270 range, it's best to go right. If it's more like 180 to 200, go left,” Leon said.

Foil finished second among Corinthian entries at last year's Midwinter Championship off Cabrillo Beach and Leon would love to repeat that performance in his home waters. That performance helped Foil capture the Corinthian Division season championship by 14 points over Twisted. Leon competed in all five events on the International Circuit and called it an eye-opening experience.

“We learned an awful lot about the methods and techniques of sailing the Farr 40 from competing against and watching the top international boats,” said Leon, noting that he switched from a wheel to a tiller toward the end of the 2014 campaign. “We picked up on some of the nuances of boat-handling and subtle things such as figuring out ways to minimize heel. Personally, I really polished my skills as a helmsman while the crew as a whole improved its overall sailing ability.”

Leon admitted it will be difficult to finish atop the Corinthian standings this week as the competition will be fierce. Insanity, skippered by Rick Goebel of San Diego Yacht Club, came away with the Corinthian crown at the Midwinter Championship after winning a tiebreaker with Temptress (Ray Godwin, Long Beach Yacht Club).

Enfant Terrible displayed superb consistency in capturing overall victory at the Midwinter Championship, which was hosted by San Diego Yacht Club. Vasco Vascotto called tactics for Rossi, who won two races and placed second in five others. Plenty, the 2014 world champion and International Circuit winner, was runner-up by five points.

Schaefer steered Struntje Light to victory in Race 2 and also posted a steady string of seconds and thirds en route to placing fourth overall. Struntje Light was hurt by a 10th suffered in Race 1 and a ninth absorbed in Race 10.

“In San Diego we had two unlucky incidents which we couldn't avoid. Other than that, we were quite happy with our season start. But the competition is tough and we are confident that we will improve our performance every step of the way leading up to the worlds in Long Beach,” Schaefer said.

Joining the fray in Cabrillo Beach is Estate Master, which made quite a strong statement with a runner-up result at the 2014 Rolex Farr 40 World Championship. Lisa and Martin Hill had not raced on the International Circuit since 2011, but showed up in San Francisco and used the Rolex Big Boat Series as preparation for what proved a remarkable performance at the World Championship regatta.

“We figured we would be a bit rusty after such a long layoff from the circuit, but we found our legs rather quickly and wound up with an absolutely great result in the worlds,” Martin Hill said.

The Hills were so pumped up about their highest finish at a world championship that they are putting in more effort this season, adding the West Coast Championship and California Cup to their schedule in hopes of breaking through and securing the ultimate goal. Multi-time world match racing champion Ian Williams has joined the team as tactician.

“That's the only crew change and was out of necessity since Andrew Campbell is with Oracle now,” Hill said. “We are very pleased to have a sailor the caliber of Ian Williams coming aboard.

Considering the success at the world championships, crew boss Andrew “Dog” Palfrey suggested keeping the rig setup and tune exactly the way it was last September. Hill said Estate Master received a paint job “inside and out” along with new instruments, but “we are trying to keep the boat exactly the way it was at worlds – same sail shapes, same mast position, same settings.”

Hill has been a member of the Farr 40 class for almost 10 years now and has been building toward winning a world title all along. “That is the ultimate goal for any Farr 40 owner, but it is extremely difficult to achieve. Placing second last year has really motivated our team and we are hoping to take the next step this season,” he said.