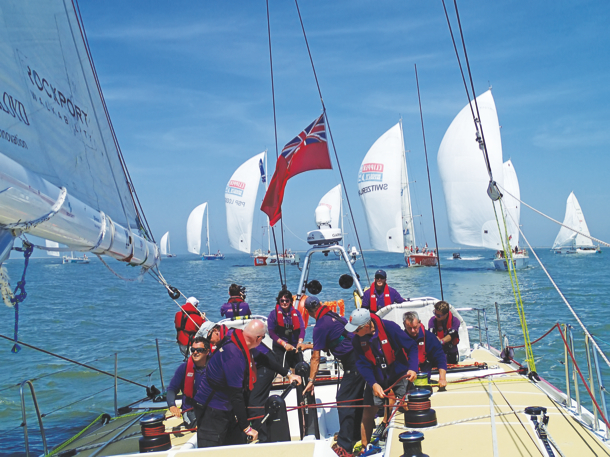 Clipper Round the World Yacht Race. Photo On Edition.

Australians and New Zealanders make up a disproportionate percentage of the world’s best sailors right now, whether on ocean racers, in Olympic classes or sailing rich boys toys in the Med. Which makes Sir Robin Knox-Johnston’s decision to base a training centre for his Clipper Round the World Race in Sydney all the more logical.

When he commissioned 12 brand new 70 footers for the 2013/14 race, Sir Robin had 10 of the old 68 footers that were surplus to requirements. So he based two of them at the CYCA in Rushcutters Bay and employed two Clipper alumni to manage the business and conduct training.

The move has been a spectacular success, with (at time of writing) nearly 100 people taking part in the meticulous preparation Sir Robin insists on for his crews. It needs to be remembered that these are not experienced ocean racers or sailing rock stars. They are ordinary people from ordinary backgrounds who have decided, for whatever reason, to pay significant sums of money to sail part-way or all the way around the world.

If you wanted to take part in any of the previous nine races, you had to fly to England to do your training, adding considerably to the expense and the time commitment. With a significant percentage of his crews coming from “down under”, Sir Robin decided to make their training more accessible.

However, the lure of training in a warm climate, with the added advantage of some antipodean sight-seeing, has meant the Sydney base caters for sailors from other parts of the world. To date only two-thirds of the students have been Australians and Kiwis. The other third includes trainees from Canada, USA, Norway, Singapore, South Africa, India, the UAE and Hong Kong, with Scotland
and England also represented.

At 40,000 nautical miles, Clipper Ventures promotes its race as the longest in the world. Host ports pay six figure sums to have the 12 boats call in and at time of writing one port in South-East Asia, both ports in the USA and the finishing city in northern Europe (almost certainly in Great Britain) were yet to be confirmed.

But what is known is that Australia will host the race in four different parts of the country as its significance to the success of the venture grows.

The race leaves St Katharine Docks in London on August 30. A parade of sail down the Thames will be followed by a trans-Atlantic crossing to the Olympic city of Rio de Janeiro in Brazil. From there the fleet will re-cross the Atlantic to Cape Town and will depart on October 31 for a crossing of the Indian Ocean.

The 2013/14 race finished the Indian Ocean trek in the historic city of Albany on WA’s south coast. It proved a successful port of call, with the town receiving widespread publicity around the world and the friendly inhabitants making the sailors feel very welcome. Consequently, leg 3 will again finish there in November before the fleet leaves for Sydney on December 1.

Another innovation for the last race was the inclusion of the 2013 Rolex Sydney Hobart as a leg of the Clipper race. Although it involved considerable expenditure on HF radios, as the CYCA stubbornly sticks to this ancient technology at the expense of more flexible satellite phones, Sir Robin said it was a success.

Competing himself as navigator on one of the Sydney-based 68 footers, he said that both parties benefited. “It’s one of the great offshore races in the world and there’s no doubt our taking part in it raised our profile. But I think the 14 Clipper boats also added something to the event,” he said.

So the Clipper boats are back for the 2015 Rolex Sydney Hobart where they will compete among themselves for the leg 5 prize and be part of Division 2 in the overall race.

Unfortunately for the crews, there will be no time
to enjoy the Taste of Tasmania or prop up the bar at
the Shipwrights Arms pub. They will leave immediately on leg 6 on December 29, which takes them from Hobart to the Whitsundays, the fourth (and new) Australian port of call.

Still less than half way through the 14 legs of the journey, the race then goes to South-East Asia (probably Singapore) and Qingdao in China before an arduous crossing of the North Pacific, which in the past has proved the toughest leg of the trip.

From an undisclosed west coast port in the USA (San Francisco would be favourite but Los Angeles and San Diego are possibilities), the fleet sails to Panama where it transits the canal and races to another undisclosed port on the eastern seaboard. Then there’s a third crossing of the Atlantic to Derry/Londonderry (a race favourite) before the final short leg to the finish line.

It is not just the boats that are “one design”. When the participants in the 2015/16 race gathered in Portsmouth in late April, they were each allocated to a particular yacht and its professional skipper. The aim is always to have a balance of ages, experience and abilities on each boat, so the crews are carefully selected by Clipper management and there is no right of appeal, although requests made prior to selection may be taken into account.

Two who requested that they be on different boats are cousins Lauren and Thomas Blunt, who apparently exchanged taunts over the Christmas dinner table about who was going to win. One of the challenges for the professional skippers is balancing the hyper-competitive like Lauren, who was a professional snowboarder in Canada, and someone who has no competitive instincts at all and just wants to finish.

For the first time there are two women among the skippers and also for the first time, one of them is an Australian. Wendy Tuck has spent the last decade as an RYA sailing instructor and charter skipper as well as competing in eight Sydney-Hobarts, which means she is only two races away from achieving her lifetime goal of ten, and making it on to the CYCA honours list. The 2015 race will be number nine.

As the sixth Australian skipper in the race’s history, she hopes to emulate countrymen Brendan Hall and Richard Hewson, who both won it.

“I’m looking forward to the whole awesomeness of racing round the world and watching people grow their sailing skills,” she says. “My main aim is to have a happy, confident crew who have a great time, but I’d also like to be up the pointy end of the results. I hope my crew will get off saying it was the best thing they have ever done, and that they will stay in contact for years after.”

ALL WALKS OF LIFE

Two other Australian women are making significant sacrifices to achieve their dreams.

Nicola Edwards is a 39-year-old graphic designer from Albany. As a member of the local yacht club she was a volunteer when the last Clipper race came into that port and it has changed her life.

“I saw this as an opportunity of a lifetime,” she said. “It was a huge decision to take a year out of my life, possibly sell my house and sail round the world for a year. It was not a decision I took lightly and in the end, the decision came down to one question… ‘Will you regret not doing it?’ My answer was a resounding YES! And from that, I signed up.

“I previously thought such an epic adventure was something I would never have the opportunity to do, so doing just one or two legs is just not an option for me. I want to do the whole thing, I want to be able to say ‘I have sailed round the world!’ I want to accomplish something remarkable, overcome adversity and be part of a bigger picture.”

Nicolette Horak, a 44-year-old chartered accountant is doing two legs, which will complete her circumnavigation of the world that started on her parent’s yacht when she was 10. She is juggling work and family commitments to allow her to take part.

“I once sailed to the Caribbean through the Panama Canal, and up to San Francisco,” she explains. “We then sailed through the South Pacific and on to Australia. Because of issues with import duties we were not able to return to South Africa, so sailed back through the Pacific to Hawaii, where my parents sold our boat. I then joined an Australian boat as crew in Hawaii and sailed to Alaska, then south back through the Panama Canal, and to the UK via Florida, where I left the boat aged 20. You will notice, in all those ocean passages that I have not crossed the Southern Ocean.

“I have always wanted to sail the Roaring Forties and to experience the Southern Ocean for myself. It is the one ocean passage I need to do to complete my circumnavigation and the race offers me the perfect opportunity to achieve one of my dreams.”

There are many more inspiring stories of people who are leaving behind the mundane to challenge themselves in an uncompromising environment. During the 14 legs of the race we will carry regular reports on the www.mysailing.com.au website. We will certainly follow Wendy Tuck’s fortunes closely and support her in her aim to become the first woman skipper to win the race. ✵
– Roger McMillan