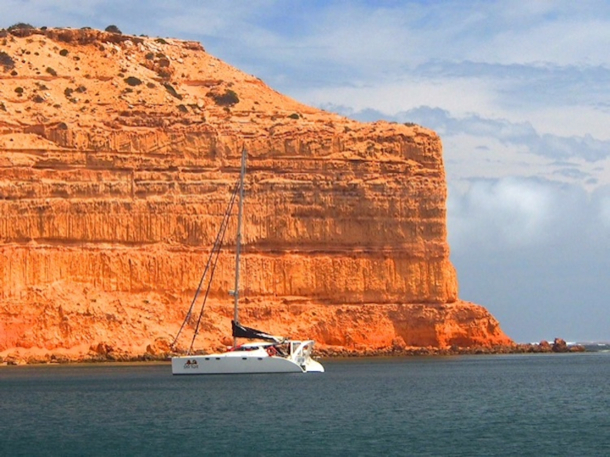 Under the towering cliffs of Sceale Bay.

We came to Streaky Bay after crossing the Great Australian Bight from the west and have now traversed further south towards Port Lincoln. But we figure sailing the opposite way would make good use of the south east prevailing winds and the south westerly swell found to be predominant in February and March.

The “end” of the bay is actually known as Blanche Port. This bay is surrounded by gently sloping farmlands, which were a burnt beige colour when we arrived.

Courtesy of the 110 millimetres or so of rain received by Streaky Bay on the second day of our visit, the surrounding hills turned a pretty green and then began sporting a carpet of yellow flowers.

The town jetty is a hive of activity. The ladies exercise group in the mornings, put us slobs to shame. Then there are many sightseers wandering along during the day with quite a few trying their hand at crabbing or fishing.

Once school is out each afternoon the anchorage echoes with the sounds of youngsters having fun in the fenced-off swimming area off the side of the jetty. There is also the odd fishing boat tying up and dropping off their catch, reprovisioning and then heading off again.

At the end of the jetty is a café restaurant, which was the scene of several long, long lunches during our stay. The food is superb and very reasonably priced.

We should know, we have tried most of it. There was perfect pork belly, marvellous mussels, beautiful boarfish and super sweet potato wedges.

Also, just across the street from the end of the jetty is the main shopping area, pub, post office, banks etc. We spent up on some spares and bits and pieces at the hardware store where we found the staff very helpful and willing to access what they did not have.

Killa’s Fuel and Tackle was another Streaky Bay business full of surprises with many boating supplies, fishing gear and other bibs and bobs that you just would not expect to be stocked in a country town. Again, anything was available overnight and nothing was any bother or too much trouble.

The caravan park was also very obliging in letting the girls do our washing and then hang it to dry on their lines. The guys replenished the boats water supply courtesy of a tap on the jetty.

Leanne and I caught our fill of crabs, without having to leave the anchorage. We mosied around in our dinghy dropping a pot in any patch of weedy sand we found and caught a dozen good sized Blue Swimmer crabs within a few hours each day.

‘Bugs’, a local identity, introduced us to razor fish, which were quite different. Sort of like a scallop, once we got the hang of cooking them they were a tasty treat.

Oysters were also in plentiful supply as there are a few farms in Streaky Bay. Prices ranged from $8 to $14 per dozen.

A couple who are regular holiday makers in Streaky Bay were very kind to take Leanne out in their boat and they caught their bag limit of King George Whiting off Cape Bauer in about six hours.

In general, Streaky Bay has a very welcoming and friendly vibe to it. Most people give you a smile and say hello and that is just walking along the street.

Many locals stopped and asked us if we were off the boats near the jetty and were generally interested in where we were from and where we were going.

We were fortunate enough to be offered a swing mooring, however, the two other boats we are travelling with (a 42ft Jenneau and a Fountaine Pajot Lavezzi catamaran) anchored in about three metres of water over sand patches among the ribbon weed on the eastern side of the jetty. Both boats had an anchor drag experience. Fortunately they quickly managed to reset their Delta anchors.

We have since found out that Marsh anchors are more suited to the area.

There is limited protection in the anchorage from a gusty southeast sea breeze experienced each afternoon. The sea breeze is, however, quite reliable in its timing enabling all hands to be on deck when it arrives and sundowners to
be held when it peters out at dusk.

All three crews were also caught out by the two metre tide in Blanche Port. While having lunch one afternoon, the tide went out, taking three beached (but untethered) dinghies away.

After three weeks in Streaky Bay a north east wind was forecast. We all prepared to leave, but found it a real wrench. After some discussion we quickly came up with six good reasons to stay another day.