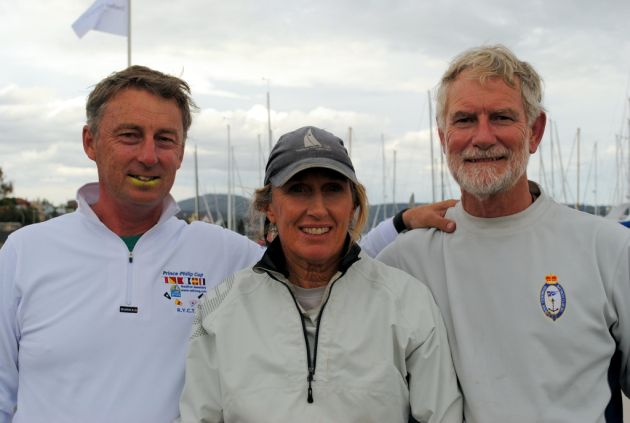 West Australian Sandy Anderson (centre) and her crew of Linnea

Two of Australia’s outstanding helmsman in one-design yacht racing, Tasmania’s Nick Rogers and Gordon Ingate from Sydney are on equal points in the Prince Philip Cup for Dragon class yachts after a day of frustrating sailing on Hobart’s River Derwent.

Rogers, from the Royal Yacht Club of Tasmania and steering Karabos, ranks first with a first and a third place yesterday while Ingate, sailing Whimsical from the Royal Sydney Yacht Squadron, sailed consistently with two seconds.

Rogers has won 10 Prince Philip Cups as a helmsman and one as crew – ironically sailing with Gordon Ingate when he won his first Cup in 2008, also on the River Derwent.

Ingate, in his 90th year and a veteran of 75 years of highly competitive racing, including the Olympics, America’s Cup, Admiral’s Cup, Sydney Hobart and many world championships, is the current holder of the Prince Philip Cup. Just one point behind these two is West Australian Sandy Anderson from Perth’s Royal Freshwater Bay Yacht Club who won race two yesterday after a close fourth in the first race of the Cup. She is the only woman to have won a Prince Philip Cup and obviously will be a strong contender this year.

Yesterdays’ two races were fraught with problems for the race committee in setting fair courses and they actually abandoned the first attempt to run race two.

Karabos IX led all the way to win the opening race of the regatta, winning from Whimsical and Aquila (Jock Young).

The first attempt to start race two was abandoned after only seven boats had rounded the windward mark, with the wind ‘going up in the air’.

Because of the winds, race two did not start until late afternoon, with the Race Committee moving the course from the eastern side of the river at Bellerive to Sandy Bay on the eastern shore.

Sandy Anderson in Linnia was one of the first to right after seeing the freshening breeze on the Sharpie course to the east. Gordon Ingate finished second again and might have won the race but for a tactical decision.