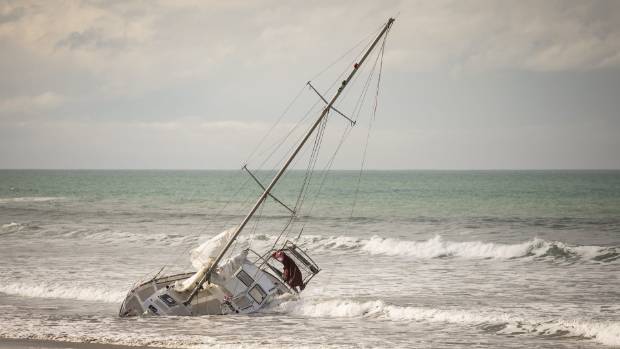 This one is going to take some sorting out! According to a report by Stuff.co.nz, the man who ran a yacht aground on New Brighton beach near Christchurch in NZ has sold it and claims the new owner will have to undertake the salvage.

Jonathan Guildford and Tom Kitchin report that Sean Grant had to swim to shore after his yacht ran aground about 6.30pm on September 12. Environment Canterbury (ECan) acting regional harbourmaster Ian Fox said last week that Grant had to remove the yacht by Monday or ratepayers would have to pay to have it moved.

ECan regional leader compliance delivery James Tricker said on Monday that ECan was working on a new removal plan because Grant had sold the yacht online. Moving the yacht and the associated cost was the responsibility of the boat's owner, he said.

“We have been in contact with the original owner, who we understand has sold it online and we are trying to establish who is the current legal owner.”

Until a removal plan had been finalised, the cost would remain unknown, Tricker said.

Grant listed the yacht for sale on Facebook on the proviso the new owner would remove it from the beach. He said it was worth up to $3000.

Read the full story and see more pictures at Stuff.