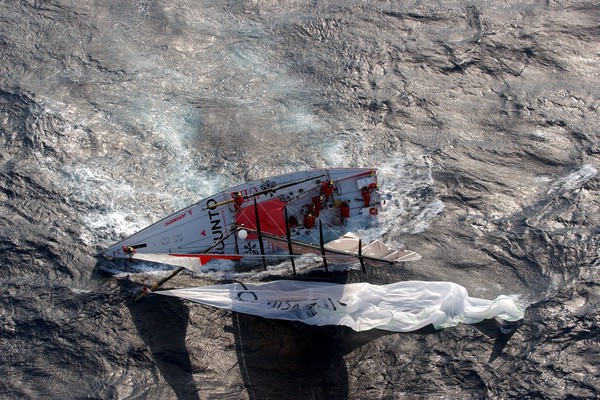 Gothenburg – 17 October 2018:  Amer Sports One, the last boat in the Volvo Ocean Race to be skippered by New Zealand’s Grant Dalton, nowadays chief executive of the America’s Cup-winning Emirates Team New Zealand, is the fifth boat to enter the Legends Race, which starts from Gothenburg in June 2018.

Relatively late to enter the Volvo Ocean Race in 2001, the first running of the former Whitbread under the new banner and ownership of Volvo, Dalton was faced with a pleasant decision.  Which boat should he race?

Nautor Challenge, Nautor Swan’s round the world racing team had built two Volvo Ocean 60s in La Ciotat, France; one from the drawing board of the Milan-based Frers design office and the other from the more familiar raceboat designers, Farr Yacht Design.  One would be for an all-male team, and the other would be an all-female team to be skippered by Lisa MacDonald, whose husband Neal, rose to skipper rival team, Assa Abloy in the same race.

After an intensive summer of testing, much of the time under the guidance of Legends Race ambassador and Volvo Ocean Race skipper, Bouwe Bekking, who was Dalton’s co-skipper, Dalton chose the Frers boat, although he said at the time that he would have been happy to have sailed either boat around the world.  He also said that if the girls on Amer Sports Too ever beat him, he would walk down Queen Street, the main street of his hometown of Auckland, New Zealand, with a pineapple shoved down his pants.  To his horror, Lisa’s team did just that on the last leg of the race from Gothenburg to Kiel in Germany and, in a good-humoured way, Lisa presented Dalton with a pineapple, and he duly obliged. The crowd loved it.

However, Amer Sports One’s race around the world was not without incident.  On Leg 2, the southern ocean leg from Cape Town to Sydney, crewman Keith Kilpatrick was taken seriously ill with an internal blockage.  Navigator Roger Nilsson, who was also a qualified medical doctor and surgeon, fitted a drip while the boat was leaping off waves, and the Royal Australian Air force dropped additional medical supplies to the boat as the team was not within helicopter range.  Luckily, race organisers had made Eclipse Island, near the coast of Albany, Western Australia, a mark of the course, and Kilpatrick was evacuated by RIB as the boat passed by.  Without having to round Eclipse Island, the boat would very likely to have been much further south and the outcome could have been very different.

Amer Sports then raced on and finished the leg having performed a spectacular broach at the entrance to Sydney Heads, where the boat lay kicking and screaming on her side for what felt like hours, but in reality was just minutes.  Long enough though, for the photographers who had gathered to cover the finish, to have a field day.

She finished the race in third place, having not won a leg, but having finished second on three occasions.

Half a decade later, the boat was bought by Canadian skipper, the late Derek Hatfield, who renamed her Spirit of Adventure and competed her in many races in Europe and North America, setting a new record for the Halifax to Saint Pierre Ocean Race.

Amer Sports One/Esprit de Corps IV has recently taken part in major Caribbean Races such as the RORC Caribbean 600, Voiles de Barth, Antigua Sailing Week and the Antigua to Bermuda Race.  She is part of a Volvo Ocean Race fleet of three, which includes Swedish Match and BrunelSunergy, both of whom competed in the Whitbread Round the World Race 1997-98.

Atlas Ocean Racing is a Canadian racing team, set up as non-profit organisation that was founded in 2014 to develop the interest of the Canadian public for ocean racing.  It is a community of 150 sailors/members, all of whom have the possibility of taking part in serious races on well-prepared raceboats.

Amer Sports One/Esprit de Corps IV, who broke the all-time record of the Lake Ontario 300 this summer, is going to be seriously competitive in the Legends Race next year.   It’s game on.