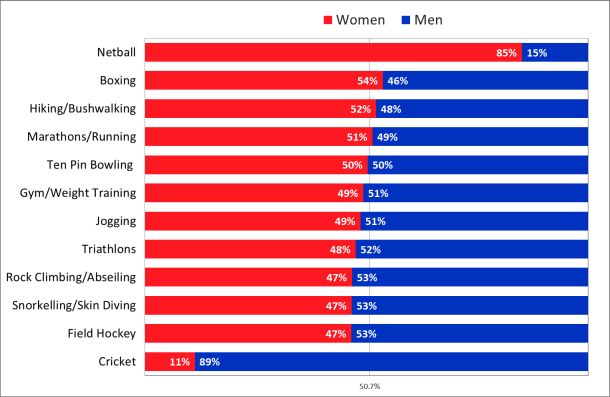 Gender participation in sports. Where is sailing?

A recent survey has been produced discussing gender balance in various sports in Australia, with sailing putting in a poor showing of female participation.

Some sports are still overwhelmingly played by one sex more than the other: 85% of regular or occasional netballers are women; 89% of cricketers are men. But in research conducted during the year to March 2015, 10 sports or activities have participant ratios within 4% points of the female:male population norm of 50.7%:49.3%.

Ten Pin Bowling comes closest to gender neutrality with a 50:50 gender split among participants (which in fact makes it ever so slightly manly compared with the population norm). The other most well-balanced sports or activities are similarly recreational and individual: Hiking or Bushwalking, Rock climbing or Abseiling, Snorkelling or Skin Diving and Gym or Weight Training all also have almost equal numbers of women and men participating.

Boxing, it seems, is even a little bit ladylike, scraping onto the list with a decidedly female participation skew of 54% women and 46% men. Field Hockey skews the other way (47%:53%) but is by far the most gender balanced team sport—the only one to make the list.

Slightly more women regularly or occasionally participate in Marathons or Running, while slightly more men are Jogging or doing Triathlons.

Of course, there still plenty of (fairly predictable) sports and activities with a clear gender bias: from the more womanly Dancing, Aerobics, Yoga, Horse-riding and Gymnastics to the more macho Hunting or Game Shooting, Motor Racing, Rugby Union, Golf and Australian Rules Football.

“Roy Morgan’s ongoing, nationwide research shows that many sports and activities have almost equal numbers of Australian men and women participating. Clearly, these gender balanced pursuits tend to be individual and recreational rather than team-based and institutionalised, suggesting there are still barriers to women accessing team sports.

“Clubs, sponsors, training and equipment providers, and Government agencies need to remember that even the most gender-imbalanced sports include minorities worthy of attention, whether the 136,000 women who play cricket or the 101,000 men who play netball.”