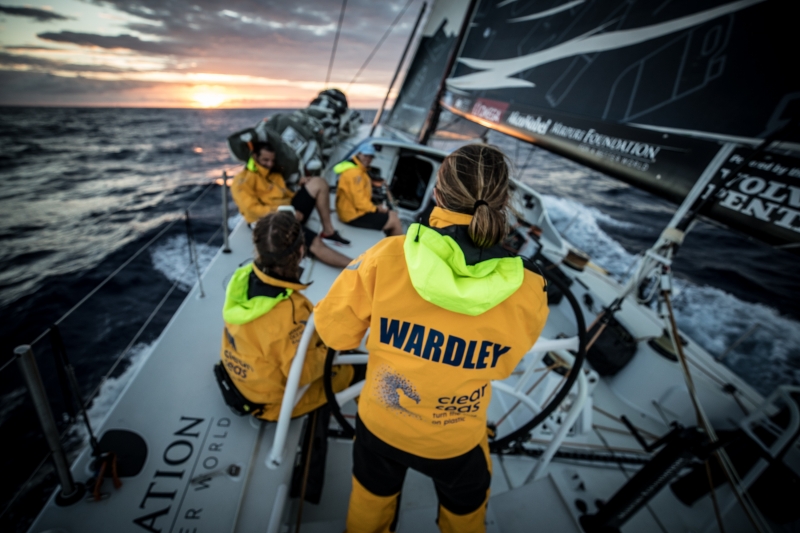 The leading pair were the most easterly boats as the seven-strong fleet approached an oil field exclusion zone 100 miles off Rio’s coast, enabling them to continue make headway north for longer while their rivals were forced to tack.

At 0330 UTC, as the westerly boats tacked, the teams were practically neck and neck split west to east by around 12 miles.

By 1300 UTC all seven boats were back on starboard tack heading north north-east once more but Turn the Tide on Plastic’s lead had grown to 16 miles, with Vestas 11th Hour Racing less than a mile off their tail.

“We have sailed within sight of Vestas for the last 24 hours having lost sight of the others as we all tacked on the shifts around a huge cloud yesterday afternoon,” Turn the Tide on Plastic skipper Dee Caffari said. “There was lots of rain, so much we were either going to grow from being watered so much or shrink from excessive water.

“We are currently sailing along the outside of an exclusion area, another oil field. The winds are light and the sea state flat. We are still with Vestas and the others it seems are behind us. Gotta be happy with that!”

Caffari reported a jubilant mood from her crew this morning – all apart from young Brit Henry Bomby, who discovered that he left his toothbrush in Itajai.

“Liz [Wardley, TTOP boat captain] has offered me the one from the tool kit/winch parts,” he wrote. “Not that desperate, yet…”

A 17-mile lead might seem insignificant in a leg of 5,600 miles but it will give Turn the Tide and Vestas 11th Hour Racing a chance to expand the advantage once they hit the south-easterly trade winds in the next couple of days.

It is often the case that, in the trades, the rich get richer as they capitalise on better, more stable breeze.

The five chasing teams must choose wisely if they are to hold on to the leading pair.

“It’s pretty important to get good position over the next 24 hours before we get into the trade winds because from that point onwards it will be a bit of a procession,” said Kyle Langford, crew on seventh-placed Team Brunel. “The next 24 hours are critical – it will set up how we sit for the next week or so.”

Prior to tacking back on to starboard Team Sun Hung Kai/Scallywag were trailing the fleet in the official standings, chasing down team Akzonobel.

At 1300 UTC Dave Witt’s crew were up to fourth having overhauled Akzonbel, MAPFRE and Brunel, and pulled back almost two miles on Turn the Tide on Plastic.

“In the grand scheme of things we’ve still got 4,500 miles still to go so this gap is nothing,” Scallywag’s Trystan Seal said. “We’ve just got to keep in touch and find our time to pounce.”