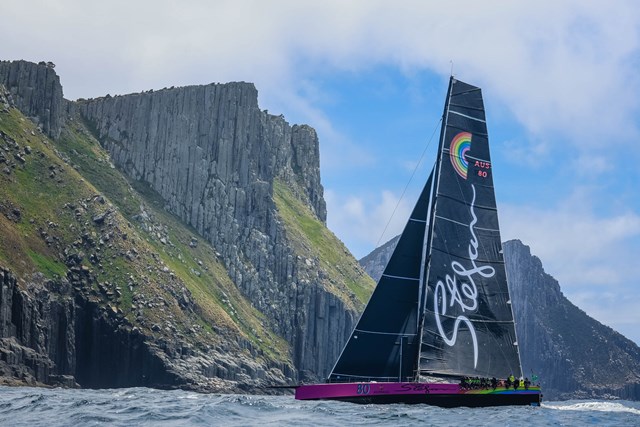 Stefan Racing skipper Grant Wharington believes the future of his boat that placed fourth on line honours in the 2021 Rolex Sydney Hobart Yacht Race today is as an overall contender.

A co-owner of the boat, Wharington was immensely proud of his crew that included three father-son pairings – including himself and son, Oli – and impressed by how the boat sailed.

Stefan Racing left an early mark by matching the three 100-footers out from the start on Boxing Day. It became distanced near the end, its crew sailed it hard to stay in contact.

“The boat can be very good for many, many years. It’s very fast in certain conditions,” Wharington said.

“It’s a very beamy boat. It’s similar to a boat like Comanche in terms of its length, beam and displacement ratio.

“So, it’s a very powerful boat, it needs a lot of wind and that’s why it’s good for this race.

“It struggles a bit in the light air and that showed through this morning and yesterday, when we just didn’t have enough breeze to get it unstuck.

“It’s a big, flat, wide dish that sticks to the water if you haven’t got enough wind.”

Asked if he believes an 80-footer could still challenge a 100-footer for line honours, Wharington said” It’d be very difficult for line honours. The boat could certainly win overall without any problems.

“In certain conditions, it’ll be competitive… we can stay close to the 100-footers.

By the time Stefan Racing finished at 3.22pm, the owners, crews and staff of the three big boats that finished ahead were well into celebrating or commiserating their respective races.

First to finish and take line honours for the John H. Illingworth Cup was Peter Harburg’s Black Jack that crossed the line at 1.37am in a time of 2 days 12 hours 37 minutes 17 seconds.

Wharington admitted he was exhausted by the rigours of what was a slow race south, highlighted by a challenging southerly and rough sea for the first day and a half.

“I am feeling very relieved to be here actually,” he said today. “It was a very long race.

“It’s quite unusual to be here on the fourth day. We haven’t done that for many years.

It was pretty tough the first night… a lot of retired retirements and a lot of damage done.

Stefan Racing appeared to make up some distance to the 100-footers yesterday. But Wharington said the aim was to try to stay as close as possible until they fell into a hole.

“We weren’t within sight, but we knew the sort of game plan on the race track,” he said.

“We knew we were going to be able to make some gains at some stage.

“They are obviously substantially faster than us, but we just wanted to be able to stay in touch with them and unfortunately we couldn’t.”