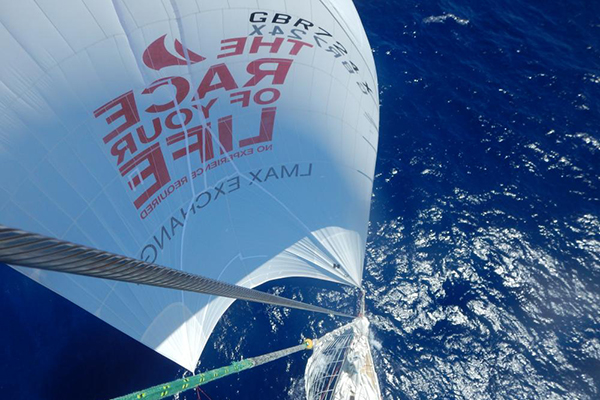 Despite lighter airs some good downwind racing under spinnaker has continued with a number of match races between duelling teams now heading for the Scoring Gate, around 250nm south.

LMAX Exchange went into Stealth Mode at midnight UTC to hide its tactics from the rest of the fleet. As a result, ClipperTelemed+ is showing least distance to finish at the top of the automatic leaderboard on the Race Viewer.

Visit Seattle’s advantage out west has also been whittled away in the last 24 hours as the team returns back inshore with a combination of a spinnaker wrap and a wind hole relegating it to the bottom of the leaderboard.

“Progress today has slowed as the wind has gone from light to nothing and back again,” reported Skipper Huw Fernie.

“So we wallowed for a while and watched the substitute medium-weight wobble limply at the end of its halyard while the fix was under way. All in all it was a good recovery and some sewing got us back into the race within an hour or two.”

Duelling pairs ClipperTelemed+ and Unicef (second), and IchorCoal (third) and Derry~Londonderry~Doire (fourth), are fighting it out heading south-east inshore, although distances are opening up as the fleet spreads out a little more.

Garmin is currently showing in fifth and GREAT Britain in sixth (as at 0800 UTC).

Despite stealth, it’s hard for LMAX Exchange to hide its position in such close racing, as Skipper Olivier Cardin describes: “Three different routes, one late start and now we are five boats in about six miles! We crossed Unicef, “Hey Bornhawler!” IchorCoal, we gybed ahead of him. Sorry. Richard (IchorCoal) on the VHF, I've just passed in Stealth Mode … And Derry~Londonderry~Doire began to show his bowsprit.

“The race is very interesting, as we are in a close fight against four boats which have clearly decided to go to the Scoring Gate. Trimming and helming must be precise all the time. We are all working hard!”

The close racing was also emphasised by Skipper Dan Smith on Derry~Londonderry~Doire as the teams head towards the Scoring Gate: “We now have less than 250 nautical miles to go to the Scoring Gate and competition looks like it is going to be tight. IchorCoal sits to our north east on the AIS (Automatic Identification System) and LMAX Exchange close beside it. Unicef and ClipperTelemed+ sit to their north with others close by. This is going to be one of the closest Scoring Gates yet.”

Qingdao Skipper Bob Beggs described a good run despite the lighter conditions: “Another day of pleasurable upright sailing, we have managed to maintain the lightweight spinnaker in the air and drawing for the last 24 hours…We have sadly dropped back on the current leaders and are awaiting the next tranche of weather information from Simon Rowell, the fleet meteorologist, so that we can plan ahead for the next few days.”

On cue, Simon has good news and bad news for the fleet from his interpretation of the latest satellite images and charts: “The cloud building over the south end of Baja California should become a small low centred somewhere in the Sea of Cortez, which is what is giving the better winds forecast there over the next 24-48 hours.

“Then, way south of that, there is a larger cluster of deep convection, part of the ITCZ (Inter Tropical Convergence Zone or Doldrums). This looks like it will turn into a tropical low over the next 48 hours and then start moving west. As it does so it should drag better north west to north east winds into it for you (good), but when it’s gone west there’ll be a very empty patch (bad) with not much gradient wind around.”

Finally a reminder from Garmin Skipper Ash Skett on what day it is: “It's 'no socks' day, which is certainly very appropriate for us as the weather warms up. I hear that the sun has also made an appearance back home too, so I encourage you all to get involved in this one!”