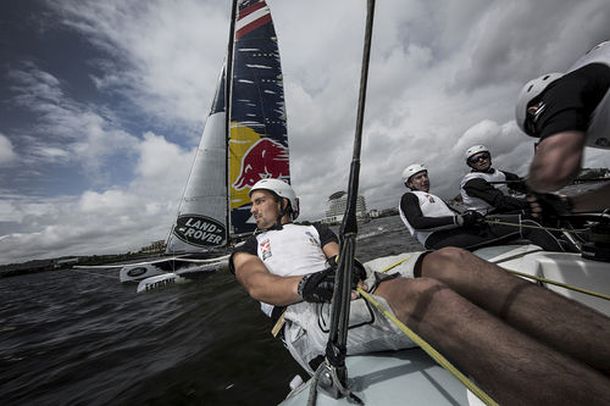 Another relentless day at the Extreme Sailing Series Act 4, Cardiff presented by Land Rover saw the Extreme 40 fleet complete eight fast paced races on a course that varied from 10-23knots over the short 550m track. With no runaway leader of the day, there was a real mixed bag of results for the teams, as they struggled with the gusty conditions, starting penalties and gear failure.

In a change from yesterdays winning form, current Act leaders The Wave, Muscat had an unusually low scoring day. Their string of race wins from yesterday were replaced with a string of fourth place finishes adding a conservative (by their standard) 57 points to their total; a respectable result on a day where most teams struggled. Having won in Cardiff for the past two years, McMillan and his experienced crew, including Double Olympic gold medallist Sarah Ayton, go into the final day with a 15-point cushion.

Chasing hard in second place, SAP Extreme Sailing Team on 195 points could easily bridge the gap tomorrow, but they will need to minimise mistakes. Today the team suffered from a series of start line penalties which cost them, as co-skipper Rasmus Køstner explained: “It was a pretty full on day today with a lot of intense racing and good conditions; it is incredible that it is the third day in a row with 20knots and a lot of action on the racecourse. We stepped it up, the starts weren’t perfect but we still managed to catch some points on The Wave, Muscat. We got a couple of OCS’ (false starts) and got into trouble but we managed to gain the positions back, so it looks like we are in striking distance for tomorrow.”

The real battle of the leaderboard today was for third place between GAC Pindar and Red Bull Sailing Team. After an excellent days racing yesterday, British syndicate GAC Pindar, co-skippered by Seve Jarvin and Chris Draper, struggled with consistency and penalties today, posting results that yo-yoed from first to sixth place, which ultimately left them in fourth place at the close of play. “I was silly and I didn’t really do the lads proud today, I got us into trouble quite a few times but it could have easily escalated and turned into an absolute shocker of a day – we kind of salvaged it with a few race wins,” explained Draper on the dock.

Red Bull Sailing Team were the team of the day, with an impressive three race wins on the tricky, gusty course, moving them up to third overall on 183 points going in to the final days racing, with GAC Pindar seven points behind in forth. Skipper on board Red Bull Sailing Team, Hans Peter Steinacher commented: “The whole course is quite tricky, coming into the finish you head into a lull and the other teams would come flying in with the pressure doing everything they could to get ahead, whilst all you are trying to do is defend your position. But that is just how it is in short course racing, we love it!”

In the chasing pack several teams suffered gear failure today as the boats and crews were put under pressure, dealing with the gusty conditions on the racecourse. Gazprom Team Russia finish the day with 163 points in fifth place despite a broken winch, but worst hit were Oman Air, who after four good races had to call it a day when their starboard mainsheet winch pulled clean off the deck, leaving the boys to limp ashore for overnight repairs ready for tomorrows showdown.

Going into the final day of racing just 27 point separates the top three boat and with conditions like today forecast and up to eight races expected the Act is still very much all to play for. Racing kicks off tomorrow from 14.00 BST. Follow the racing live at www.extremesailingseries.com/live.