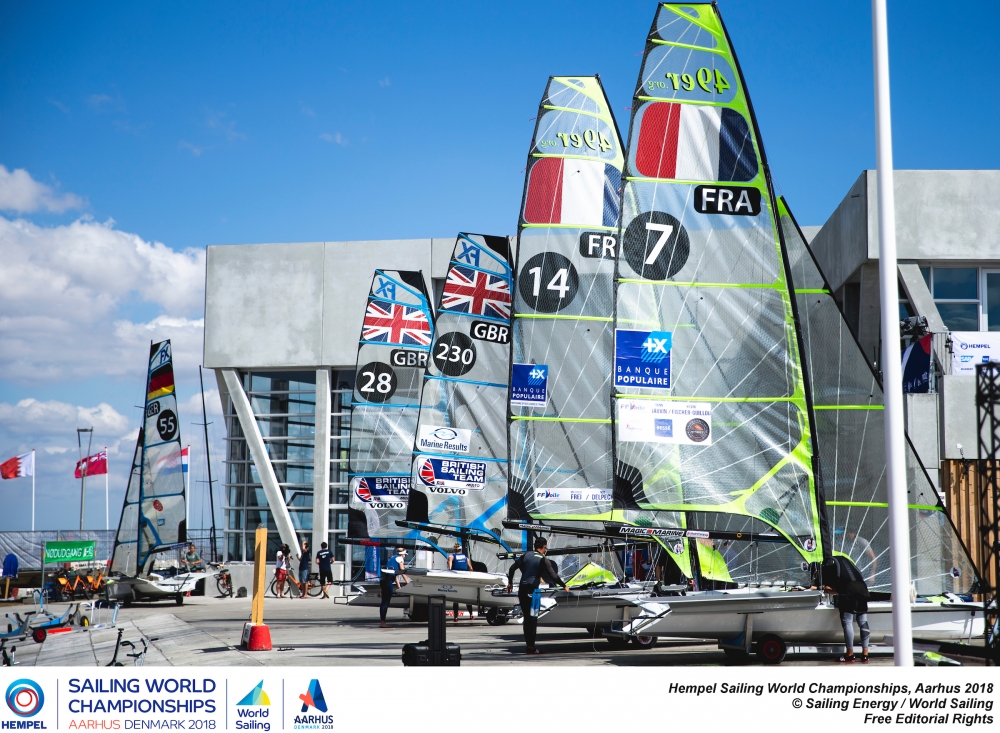 With 1,400 sailors from 85 nations in close to 1,000 boats in 10 Olympic classes studded with stars old and new, the competition (August 2-12) promises to be ferocious, with epic head-to-heads in every fleet. More than 1,100 volunteers will make sure everything goes smoothly.

There is even more than medals at stake as these Sailing World Championships are the first and largest qualification regatta for the 2020 Olympic Games in Tokyo and Enoshima (sailing), with 40% of the places being decided. We could have our first Olympic qualifiers from the Finn, or 470s – the three classes to launch on Thursday – decided by Saturday. The individual sailors cannot qualify for the Olympics through the World Championships but the nations can claim their spot.

The excitement in the city and the boat parks are palpable, particularly for the Danish competitors. Even the seasoned home Olympic champions have never experienced anything quite like it. A gleaming new Aarhus International Sailing Center will bear witness to it all.

“It’s amazing how big it is,” Jonas Warrer, the 2008 Beijing Olympics gold medallist in the 49er, who grew up a mile away, said. “The interest is far bigger than anything before, it’s more like the Olympics, except it’s happening where I grew up. Everyone is coming to Aarhus. I grew up just there, the other side of Riis Skov wood. To have your friends here watching is incredible.”

The World Sailing Championships are where the future meets the past. Illustrious names from the Olympics and beyond find the next generation vying for all their tomorrows. That has never been the case more than in Aarhus 2018.

The only Olympic champions from Rio missing are Peter Burling and Blair Tuke (New Zealand, 49er) and Giles Scott (Great Britain, Finn). Sime Fantela (Croatia, Men’s 470) has switched to the 49er. But the rest are here along with those who chased them onto the podium, the rising stars and those from their own countries seeking to seize the one national Olympic spot.

The plots and sub-plots will twist and turn with each race, starting with the Finn and 470s. In the Finn, the Rio 2016 bronze medallist, Caleb Paine (USA), is back on form after taking 2017 out. Jorge Zarif (BRA), who just missed out in Rio, is the form man.

Previous Worlds medallists, Edward Wright (GBR) and Pieter-Jan Postma (NED) will also be competing in Aarhus, but it will be hard not to keep an eye on Australia’s Tom Slingsby, the Laser gold medallist at the London 2012 Olympics. After not quite getting an Australian America’s Cup bid to fly, he has switched to the Finn after six years out of dinghy sailing. He is lighter on pounds and practice than he would like in this class of the giants, but he sprinkles the kind of stardust evident throughout the fleet.

There is more America’s Cup experience in the shape of New Zealand’s Josh Junior and Andy Maloney (both Finn), winners with Team NZ in Bermuda in 2017.

In the women’s 470, three Olympic medallists – Hannah Mills (GBR), who took gold in Rio 2016 after silver at London 2012 – Camille Lecointre (FRA) and Fernanda Oliveira (BRA), will all be sailing with new crews. Mills, who has a new partnership with Eilidh McIntyre, picked out the Japanese and Spanish crews as particular threats. Her words also echoed those of the other champions through the boat parks.

“I tend to perform better under high pressure,” Mills said.“I probably let myself off the hook a bit too much when it doesn’t feel like it really matters. For Elidh and I it’s good to be in this position because you hope going into the Olympics this is the position you’re going to be in; that everyone wants to try and beat you and so to have it now, I think it’s great experience for us as a team.”

In the men’s 470, Mathew Belcher & William Ryan (AUS), Panagiotis Mantis & Pavlos Kagialis (GRE) and Luke Patience (GBR) are Olympic medallists and will be the ones to beat.

And that is just for starters. Coming up, in the 49erFX, the top four from Rio will continue their battles across the world. Four three of the helms – gold medallist, Martine Soffiati Grael, Jena Hansen and Tamara Echegoyen Dominguez – the contest takes on added dimension, having just been facing each other offshore in the 65ft Volvo Ocean Race boats.

Meanwhile, among a deep and powerful Nacra 17 fleet still mastering the foils, Nathan Outteridge, the Olympic gold medallist in London 2012, silver medallist in Rio 2016 and latterly and America’s Cup skipper with Artemis, will be in a new partnership with his sister Haylee.  Meanwhile, Outteridge’s old partner, Iain “Goobs” Jensen will be back crewing in the men’s 49er.

And can anyone beat the formidable flying Dutchwoman, Marit Bouwmeester, in the Laser Radial?

More on the windsurfers when they start on Sunday, but this fifth edition of the Sailing World Championships will also include kiteboarding, for men and women, for the first time.

They will all be cheered on by a deeply knowledgeable crowd on the pontoon, especially for the stadium sailing courses. “They say that you’re never more than 50km away from the sea wherever you are in Denmark – and that you’re usually standing next to a sailor,” Lars Lundov, CEO of Sport Event Denmark, said. “So, the whole of Denmark is really proud to welcome the world to the Aarhus.  The 1,100 volunteers who will be helping to bring this event alive are testament to that.”

“These Sailing World Championships are the result of the long-term collaboration between the Danish sailing federation, the City of Aarhus and Sport Event Denmark. Their legacy will be for the whole of the sailing world and fans both old and new. When we bid to be the hosts we said Aarhus would be the right place at the right time, now we are going to prove that.”

Another proud Dane is World Sailing’s president, Kim Andersen. “To host the Hempel Sailing World Championships in my home country and in Aarhus, a legendary sailing city, is a very special feeling,” Andersen said. “From the 29 August 1866, when Aarhus hosted English, Norwegian and Danish sailors in the first international competition on these waters, the city has become a renowned venue, regularly hosting youth and elite competition.

“Over the next two weeks, Aarhus will come alive once again with the sights and sounds of world class sailors, the stars of the sport and I look forward to seeing everyone on the water.”