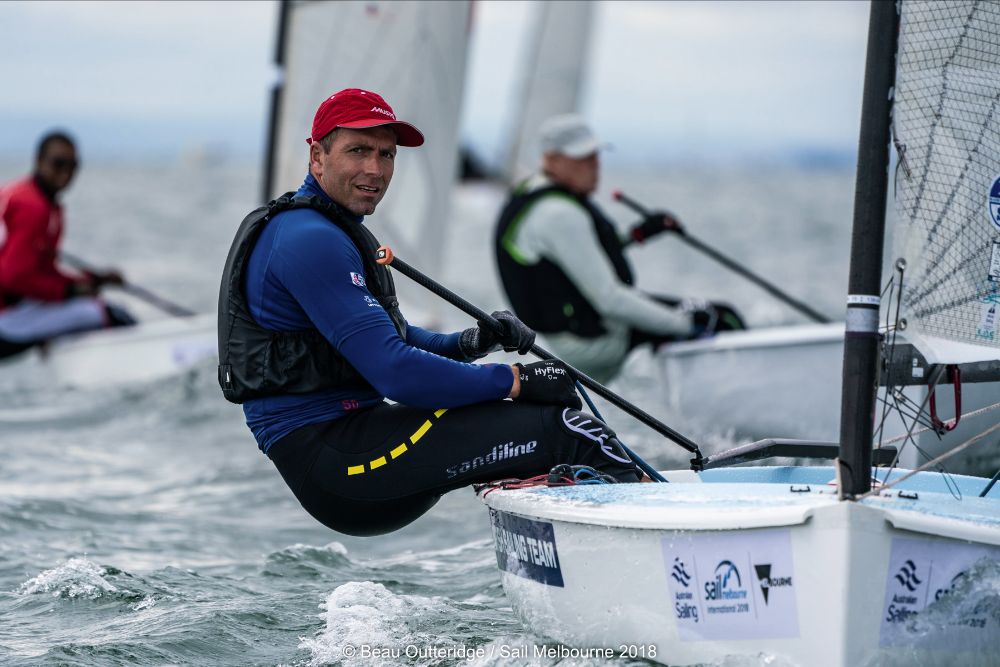 The 40-boat fleet will be the strongest fleet to contest the Australian championship in 20 years. For the Australian sailors taking part, the event has increased significance, as it is the main qualifying regatta for the 2019 Finn Gold Cup, which is being held in December at the Royal Brighton Yacht Club.

European champion, Wright, commented, “The British Finn squad and various other top nations have been down in Australia for a while now. We are all getting a lot out of the amazing conditions and the friendly atmosphere from the Royal Brighton YC. They made us very welcome in their new club facility. Now we have moved to Black Rock just down the road ready for the nationals, which looks to be a great forecast. It’s going to be tough racing with many talented sailors. It all starts tomorrow. Let’s see how it goes.”

The defending champion is Jake Lilley, but he will have a tough time to repeat this week. The Australian fleet includes all the international sailors, who have been training hard in recent weeks.

The 2017 champion, Oli Tweddell, is happy to see such a large fleet on home waters.

“It’s pretty amazing to have such a big turnout from overseas, and also domestically.”

“All the international sailors have been training in Melbourne getting ready for the Worlds later in the year, so the training has been of the highest quality, and I’d expect another great event with lots of tight racing.”

“Our masters and junior fleet are also very strong, so it will be great to see them all battling it out for those titles.”

The Australian U23 sailors will be pushing hard for the U23 title. Based on recent performance, Jock Calvert, from Tasmania, should be favourite, and is up against Lachlan Gilham, who won the silver medal in the U19 category at the 2018 Finn Silver Cup, and Harmon McAulley, both from Perth.

One overseas sailor who has made Australia his training base as he attempts to qualify for Tokyo 2020 is Rockal Evans, from Bermuda.

“Training in Australia has been great. I’m seeing improvements all around the race course, upwind and downwind. Really looking forward to the Australian Nationals. It’s a nice size fleet with lots of people from overseas.”

One intriguing battle the championship could produce is between the two Dutch sailors. Last time they met, in Aarhus, Postma came out on top. Heiner later won the first big event at the Olympic venue in Tokyo.

Postma is sailing a borrowed boat this week, but said, “It a big honour to be here and race.”

“Tomorrow we start and I don’t feel ready without my own mast and boat, and still adjusting to heat. But even with that, let’s check where we stand. And give it some.”

The regatta follows straight on from last week’s Australian OK Dinghy Championship at Black Rock, with a number of sailors taking part in both events.

The Minister for Tourism, Sport and Major Events, Hon Martin Pakula MP, commented, “Hosting events such as OK Dinghy National Championships and Finn Australian Championships, and doing it so well, is one of the reasons that Victoria is the sporting and major events capital of Australia.”

“Victoria lives and breathes sport and no one puts on a show like we do. More than 500 events have been funded through the Significant Sporting Events Program alone and more than half of those events were held in regional Victoria, boosting local jobs and economies. These events are so important to our visitor economy, which is worth over $25 billion to Victoria, employing over 214,500 people across the state, and that’s why the Victorian Government is proud to be supporting this event through the $17.7 million Significant Sporting Events Program.”

Ten races are scheduled from Tuesday 8 January to Saturday 12 January. The long range forecast looks perfect with mild temperatures and sea breezes predicted for the first few days, getting hotter later in the week, with some big wind expected near the end of the championship.