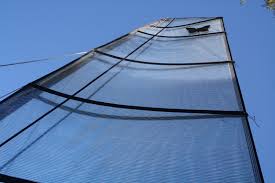 New York, N.Y. – Australian company Advanced Wing Systems (AWS) and New York Yacht Club American Magic, U.S. Challenger for the 36th America’s Cup, today announced that AWS, a leader in sail design and engineering, has been named as an official supplier of the team. AWS has assisted American Magic in incorporating the latest in soft wing sail technology into the team’s 38-foot test boat, the Mule.

“Advanced Wing Systems has given American Magic a boost in the early stages of our campaign for the 36th America’s Cup,” said Terry Hutchinson (Annapolis, Md.), Skipper and Executive Director of American Magic. “We are excited to have their experience and intellectual property as we move forward with our wing sail design effort.”

Founded in 2012, Advanced Wing Systems was an early leader in the concept of “soft wing” sails, which deliver many of the performance benefits of the rigid wing sails used in previous America’s Cup matches, but with fewer operational and logistical difficulties.

“We are keen to be involved with American Magic because while we have been testing this concept for some time, an America’s Cup team offers us an unmatched opportunity to innovate and push sail technology forward,” said Greg Johnston of AWS. “American Magic operates at the pinnacle of sailing, and we are very proud to support the team.”

The Advanced Wing Systems Semi Rigid Wing (SRW) sail is the optimum combination of performance and practicality. It is the result of extensive research, modeling and practical testing. It provides a practical combination of aerodynamic performance and robustness in design. The AWS system is suited to almost any sized yacht, from off the beach craft to super yachts. The simple and robust design means it can withstand the rigors of ocean sailing and racing. http://www.advancedwingsystems.com