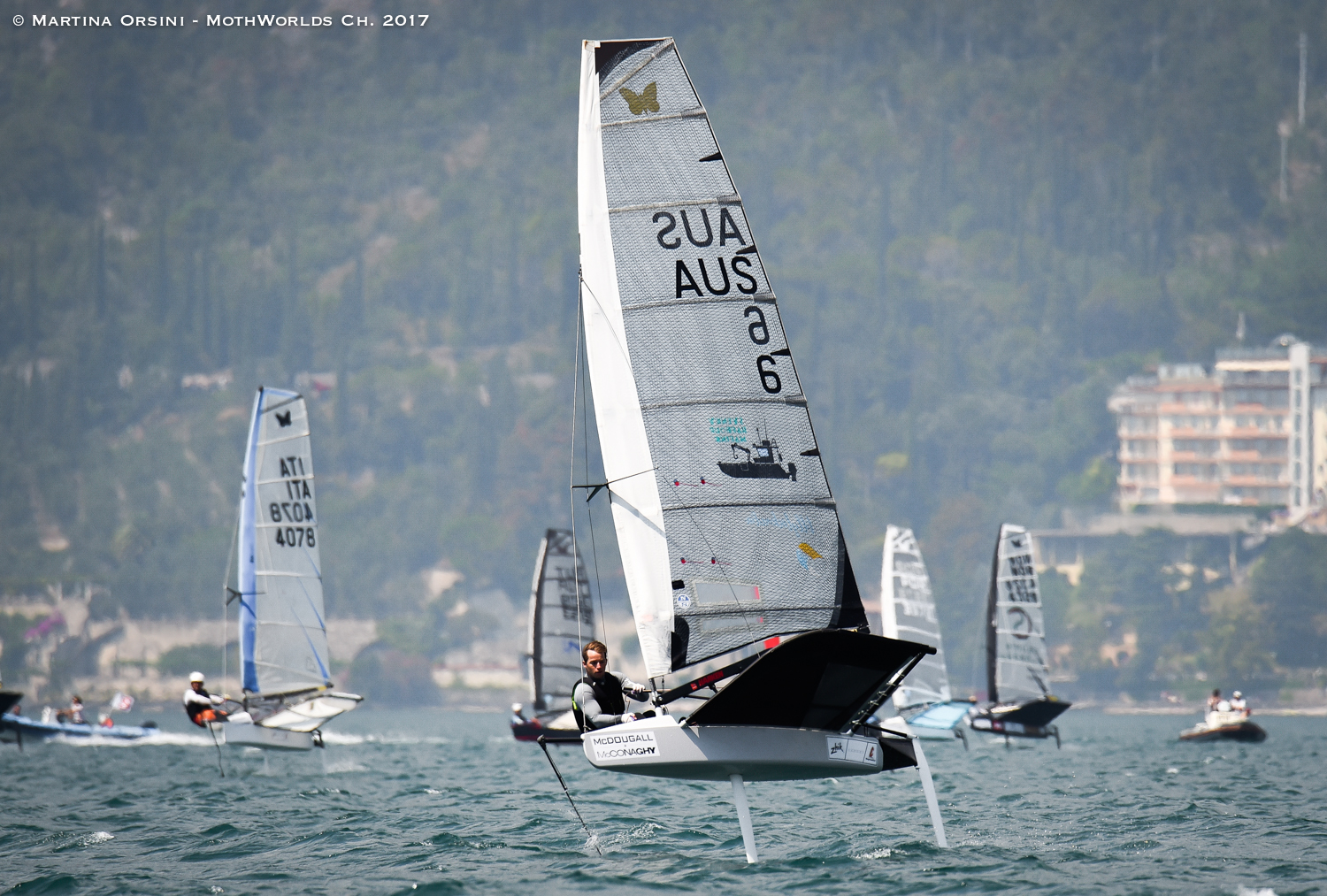 The largest and most competitive Moth World Championship begins this week at one of the most glamorous racing locations in world sailing, Lake Garda. A record 240 Moths are entered from 25 countries from all over the globe, making this world championship one of the sailing events of the year.

The fleet will be split between four groups for two days of a qualifying series, then split into Gold, Silver and Bronze fleets for the final series held over three days. Windward / Leeward type courses will be used for the whole regatta.

The entry list is a rich mixture of sailors from the last America's Cup in Bermuda, Olympians (several gold medallists), Volvo Ocean Racers, World Champions and regular Mothies who race in their circuits all over the world.

Many of the Americas Cup sailors have only just got back into their Moths after a year or more racing foiling wing sailed multihulls so have had little time to adapt but will still rank as some of the favourites to take the 2017 world title.

One of those sailors is Paul Goodison (GBR), the current World Moth Champion. ‘Goody’ was racing in Bermuda with Artemis Racing Team and also has an Olympic Gold medal in the Laser Class to his name. He took out the Italian Moth Series in Garda, (unofficial warm up event) with 5 bullets and a 2nd place. He is confident and in top form.

Another of the top Brits is likely to be Rob Greenhalgh. Rob has been sailing in Lake Garda for a couple of weeks winning the Foiling Week Moth regatta with a string of bullets. He was European Champion in 2015, 3rd in the 2016 Worlds and winner of the last MS Amlin International Moth Regatta in Bermuda and has a diverse background of skiff world championships, keelboat and offshore trophies.

The UK fields one of the largest entries at the 2017 Worlds with a competitive fleet actively racing the International Moth circuits. Ben ‘the Patonator’ Paton is one of these and boat builder / sailmaker Mike Lennon is another strong force.

Man of the moment, Pete Burling has flown in fresh from his celebratory tour of his home country as helmsman of the America's Cup winning Emirates Team New Zealand. Pete’s track record speaks for itself, Olympic Gold Medals, world championships in just about anything that foils, including the Moth world title in 2015 in Sorrento, Australia. Pete has been busy adapting it with some latest mod cons.

Burling’s arch rival in so many fleets, Nathan Outteridge (AUS) will be doing his best to reverse the fortunes. Nathan is one of the most successful Moth sailors of all time, winning the Moth worlds in 2011 and 2014 and coming second in 2009, 2013 and 2015. He also has a long list of sailing accomplishments that include an Olympic Gold Medal in the 49er, 4 x world titles in the 49er and most recently America's Cup skipper of Artemis Racing.

The huge batch of talent from down under includes another former Moth World Champion, Josh McKnight and America’s Cup/Olympic Gold medallists, Tom Slingsby and Iain ‘Goobs’ Jensen and long term Moth world contenders Scott Babbage and Rob Gough.  Also racing in the Moth at his first worlds is current Laser Gold medallist, Tom Burton. All of these guys are fast, very fast!

Notable contenders from the USA are Anthony Kotoun and Brad Funk. Both very quick Moth sailors who consistently push well into the top ten. There are also competitors representing Bermuda and Canada.

Host nation Italy will hoping for an upset on home waters. Carlo de Paoli Ambrosi, Francesco de Bruni and Francesco Bianchi all performed well in the Italian Series, warm up event, finishing in the top 15 overall.

There are a number of other strong Moth fleets building in Europe. Sailors from Austria, Belgium, Croatia, Denmark, France, Germany, Greece, Ireland, Netherlands, Poland, Portugal, Slovenia, Switzerland and Sweden have come to Lake Garda to enjoy the magical waters and regular breezes.

Apart from the Australians and the Kiwis, those who have made a long journey to compete in Garda include Mothies from Japan, Argentina and Hong Kong.

The female fleet is only small but still very competitive. Olympic Laser Silver medallist Annalise Murphy (IRE) has raced in the gold fleet in Sorrento 2015 Worlds and a force to be reckoned with, especially if the wind is fresh. Wakako Tabata from Japan is another Olympic sailor racing at Lake Garda. She is embarking on another Nacra 17 Olympic campaign, this time on foils.

There is a strong Youth category (Aged 23 years and under) with 19 sailors entered from 12 nations. The youngest competitor listed is Massimo Contessi from Argentina at the tender age of 17 years.

Phil Stevenson (AUS) at the tender age of 67 years, is a real veteran of the class as is fellow countryman Les Thorpe, who has arguably competed in the most world title events.

The diverse mixture of competitors and their backgrounds is a major contributing reason why the 2017 McDougall + McConaghy Moth Worlds will be one event not to be missed.

Racing starts on Tuesday 25 July and concludes on Sunday 30 July.