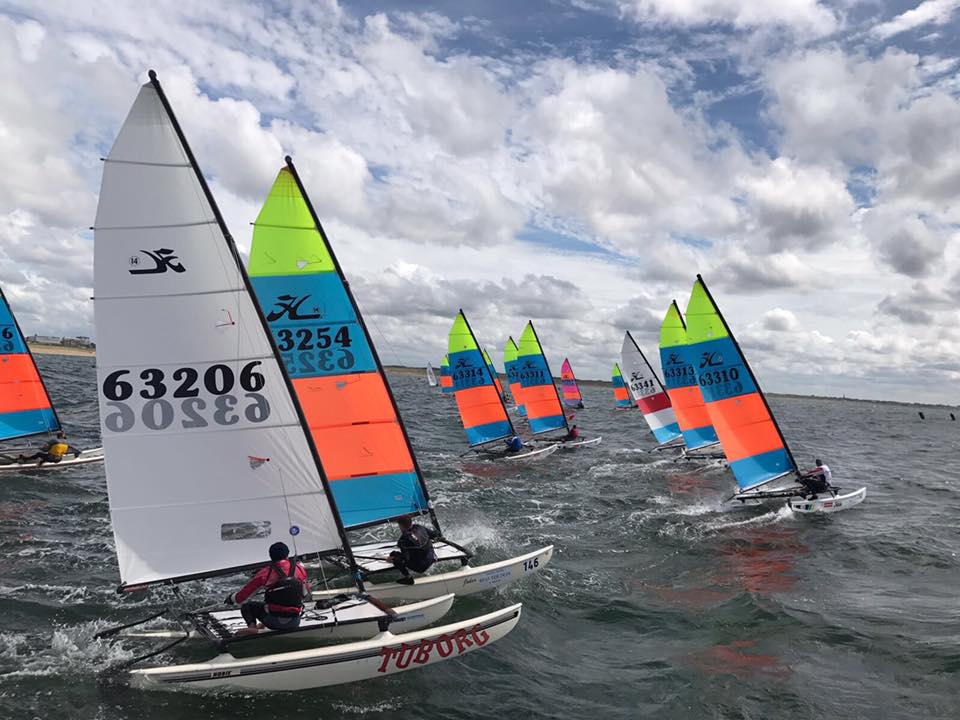 Today, the last race day for Hobie classes 14 and ragoon World Championsips,  and European 16 Youth Spi, , EHCA Spi Cup, Masters, Grand Masters and Great Grand Masters was sailed in exciting and later turbulent conditions. The day started with moderate winds from the West / South West and a fair share of sunshine. During the course of the day, the wind picked up to fresh and even strong breezes, causing a massive windswell at sea and a challenging shore-break with the upcoming tide. For the saftey of the sailors racing was abandoned due to a threatening thunderstorm. All boats rushed ashore with heavy rainfall and wind speeds reaching up to 27 knots. Fortunately, the thunderstorm passed quickly and all sailors came in safe and sound.

During the rain, the crowds on the beach found shelter in the blue-and-white tent, the Holland Hobie House on the beach, overlooking the Alpha and Bravo courses. Like the previous days the beach was filled with a great atmosphere; the scent of fresh coffee, mellow music and occasional live footage from the drone hovering the race courses. We love the Hobie way of life!

Some time after the general recall, the Hobie 14 and Hobie 16 classes went back to sea to complete their final races. Many sailors chose to stay ashore, due to the strong winds and challenging surf. The sailors that went to sea treated the crowds on the beach to spectacular views while challenging the shore break and strong side-onshore winds. Hobie Dragoon and Hobie 16 Youth Spi did not go out to sail more races and started packing up.

In the Hobie 14 class four races were sailed today, with the following results:

Fletcher paid tribute to his wife and mentioned ‘Georgia won more races than I did’ though consistancy paid off for for Fletcher, never sailing out of the top 10. While Defending World Champion showed his true class in racing when the breeze increased.

Awaiting the awards ceremony for the Hobie classes that sailed the previous days, sailors and other Hobie fans came together in a celebration party with friendly people, stories about strong winds, big waves, music, food and drink. To all the readers and followers out there: sorry you missed it!

Tomorrow, day five of the event, again will be a very interesting. Sailors will compete to qualify for the Hobie 16 Open Championships, with potentially over a hundred boats on the water. Weather conditions look fair for tomorrow’s races; the day will start with light winds from the North and some sunshine. In the late afternoon, the wind will pick up. There is lots of rain on the menu for tomorrow, so if you plan to visit Noordwijk to share in the Hobie way of life, make sure to bring your umbrella!