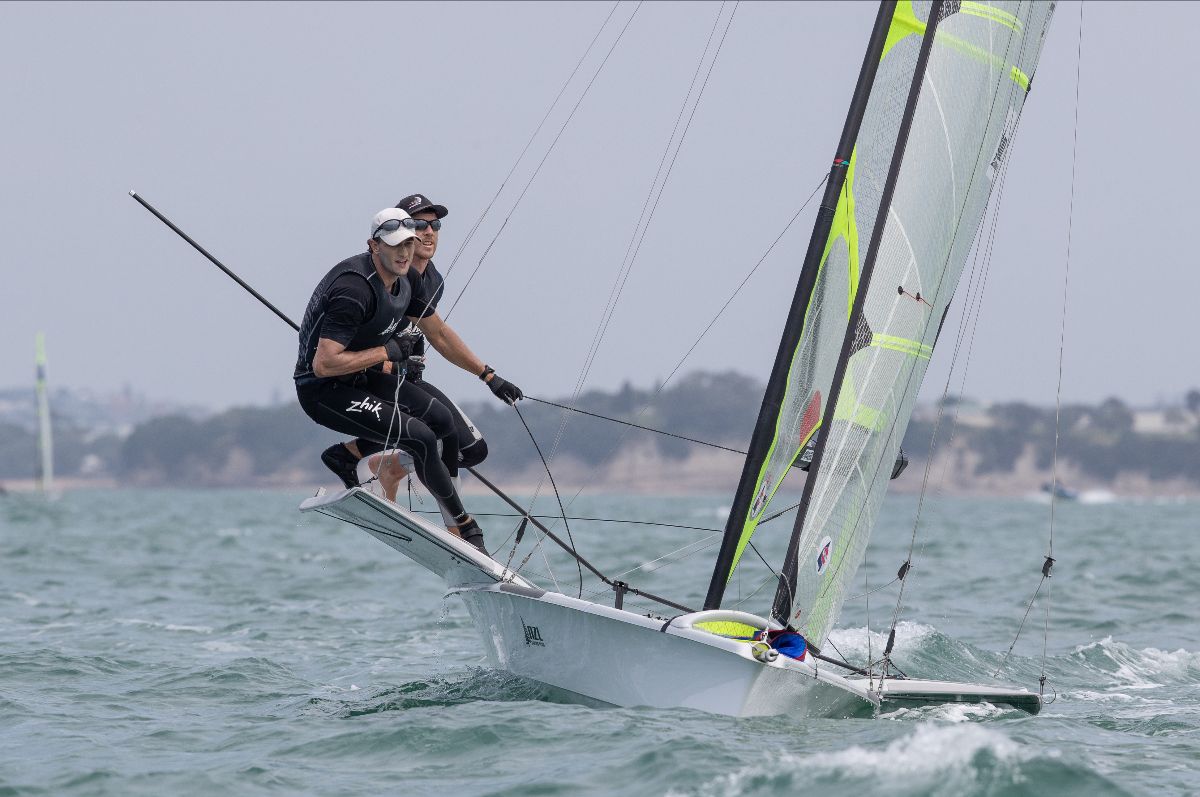 Blair Tuke hoped it was a good omen as heavy rain belted down during last night's opening ceremony of the Hyundai 49er, 49erFX and Nacra 17 world championships.

Tuke told the crowd of sailors, officials, coaches, supporters and representatives from Ngati Whatua Orakei forced indoors that it also rained when Emirates Team New Zealand launched their America's Cup boat in 2016, and that campaign didn't turn out too badly for them.

Of course, the 406 sailors from 40 countries will be hoping the rain was a good omen for them when six days of racing begins tomorrow. It is a high-stakes regatta, with many countries trying to secure Olympic qualification and others who have already guaranteed spots at next year's Tokyo Games using it as a selection regatta.

Peter Burling and Tuke are aiming to win selection for the New Zealand team and then defend the gold they won at the 2016 Rio Olympics. A fifth 49er world title will certainly help and this week's event looms as one of extra significance given it's on home waters.

“It's mainly excitement,” Tuke said of what lies ahead. “Just doing the opening ceremony, the powhiri and seeing everyone enjoy the Maori culture has probably hit home that we are racing at home but also made it feel that we are doing a regatta now. It's full business.

“It's been a good week for us in terms of our preparation. We went reasonably well in the practice regatta [when we were third] and have had a few days now to have a few quick sails on the water and rest up. We are ready to go.”

Burling and Blair Tuke go in having won the year's two big regattas so far in the 49er, the European championships and Olympic test event, but aren't the only strong New Zealand 49er combination.

A dozen Kiwi crews are among the 89 teams lining up in the men's skiff and Logan Dunning Beck and Oscar Gunn as well as Isaac McHardie and William McKenzie all have the potential to get among the medals.

Alex Maloney and Molly Meech are among the contenders in the 49erFX and showed some good form last week when taking out the Hyundai Oceania Championships, although the pair weren't reading too much into the result given it was a warmup regatta.

“It’s nice to win the training event but we really see it as training and getting used to racing again and the race courses,” Meech said. “We can see we are going alright in the fleet and some of our routines, like starting, are coming along nicely.”

Fresh conditions are forecast for racing on Tuesday which will test crews and add to the intensity and excitement in the boat park.

“It’s about as big as it gets, really – six months out from the Games and for us as Kiwis having an event on your home waters is pretty awesome,” Tuke said.

“There’s a lot at stake for a lot of countries here. For us, it’s been a while between world champs so we are pretty excited to try to put down a good performance. It’s going to be awesome.”