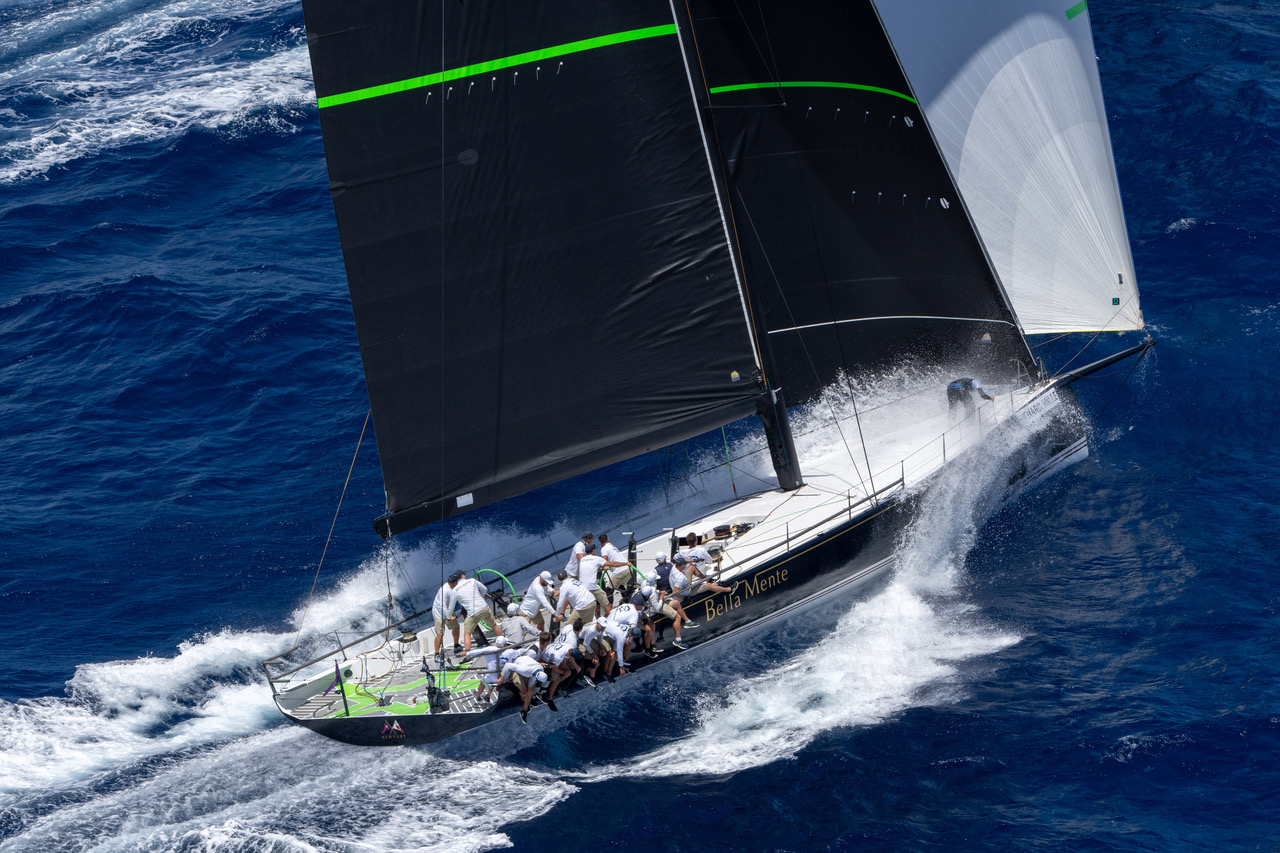 On winding coastal courses resembling those around the Costa Smeralda, but with a sizeable Atlantic swell added to the mix, day two of Les Voiles de St Barth Richard Mille took place in similarly challenging conditions to yesterday with a 20-plus knot gusty easterly.

Despite the tough conditions, in both classes a match race for the lead took place, none more cut-throat than among the former Maxi 72s where according to Vesper’s Kiwi tactician Gavin Brady, Bella Mente was looking for maximum engagement, circling them three minutes before the start: “It makes it interesting and we are definitely entertaining the owners, but it’s got to the point where it is better for us if they are just in front of us, otherwise they are always going for a penalty.”

Brady continued: “They tried to set a trap and hit us today. I knew that something was going to unfold – we avoided them, but I had to grab the leeward wheel and spin us out of the way. Both boats slowed down to three knots from a reach! But we have been racing each other for years and have enough good sailors to deal with that. You just have to be ready…”

Today’s courses were of a similar length to yesterday, 28 miles for the Maxis and 24 for CSA 3. This was predominantly in the lee of St Barts, but with a shorter loop up into the nature reserve northwest of the island and a longer beat at the top of which the boats experienced the full brunt of the Atlantic swell.

Bella Mente’s co-helmsman and crew boss, two-time Volvo Ocean Race winner Mike Sanderson, observed: “It is amazing – it almost feels like since the class has opened up, the racing has got closer.” Bella Mente is two foot longer in the stern and her bulb weight is being tweaked, but according to the Doyle Sails CEO they are currently suffering from being around 10 days behind Vesper in their crew training.

As to today’s race with Vesper, Jim Swartz’s machine won the first cross and finished two minutes ahead under IRC corrected time. “There were four or five lead changes and we got tangled up with Deep Blue up the first beat and down the first run,” continued Sanderson. “There were plenty of opportunities – it was a super fun course and it was never over, right until the end. Vesper passed us on the reach when we had a few issues and we passed them on the last run into the finish, but we didn’t make up our time.”

On board it was tough with green water regularly sluicing the cockpit. “It was impressive – jumping off waves and hitting 23-24 knots… The [bilge] pumps are working hard, especially on very inshore orientated boats like ours, with far too many holes in the deck. It gets a bit hairy.”

Once again today, George David’s Rambler 88 was third in the Maxi class ahead of Wendy Schmidt’s Deep Blue with the Mills 68 Prospector sadly having to retire from racing due to crew health reasons.

Stark Raving Mad VII again had a good day although her winning margin of two and a half minutes over Yoru was smaller. Tactician, former Melges 32 World Champion Anthony Kotoun recounted: “It was a typical St Barts day: Windy, wavy and a great course – some upwind, some reaching, some navigation – exactly what makes sailing here so interesting and fun. Your lead is never safe and if you are behind you are never out of it. It is everything you ever hoped for in a sail boat race.”

Lining up with Yoru, once again today proved that the longer Italian boat is better reaching and running while Stark Raving Mad VII performs better upwind. Victory for the American boat came today despite breaking a jib sheet and a halyard that caused a sail to drop twice unintentionally.

“But the crew hopped right to it and had it fixed immediately,” said Kotoun. “It happened at the top of the island where it is windy and wavy. Luckily we had built up enough of a lead that we were able to take the conservative approach how to fix it without getting anyone hurt and still won.” Nonetheless the top of the course was exciting and according to Kotoun it is rare for their Swan 601 to hit 19 knots two days in a row.

Conditions are set to abate marginally tomorrow with the wind backing into the ENE. The first warning signal will be at 1000 local time. Racing continues until Saturday with a layday scheduled for Thursday.