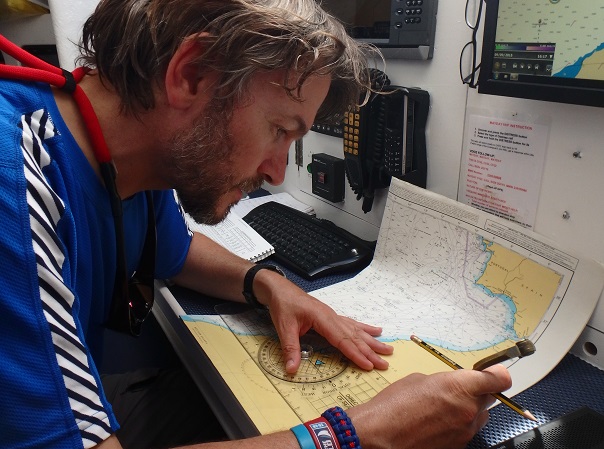 In the nav station on PSP. Photo Clipper Ventures.

The conditions at the front of the fleet have become more tropical with lots of squall activity as the Inter Tropical Convergence Zone (ITCZ), known as the Doldrums amongst sailors, approaches, with the monsoon trough having widened dramatically all the way across the Atlantic.

The ITCZ is a low pressure belt near the equator where the northeast and southeast Trade Winds come together creating extremely light airs and leader LMAX Exchange sailed through squalls overnight, changing from a lightweight spinnaker to Yankee 1, in the approaches to the ‘Doldrums Corridor’ which is marked on the Race Viewer.

Approximately 150 nautical miles behind are teams GREAT Britain and Derry~Londonderry~Doire, having gained two and one point respectively at the Scoring Gate on Saturday afternoon, following a fight for the remaining points.

GREAT Britain Skipper Peter Thornton said: “It came down to an intense battle with Derry~Londonderry~Doire – careful helming, gybing and no mistakes to get the two Scoring Gate points.”

The racing rules have introduced a method for avoiding the fleet being trapped for many days in the ITCZ, as happened in the previous edition of the Clipper Race.

All yachts must cease motor-sailing at 20N regardless of whether they have completed 6 degrees of latitude under engine or not.

However the fleet is dispersed over 1000 nautical miles now and there are many tactics still to be played out before it reaches the ITCZ. Tenth-placed Da Nang – Viet Nam Skipper Wendy Tuck described the last 24 hours on board in improving conditions: “Things are much nicer here on the mighty ‘Flo’ (the nickname for our yacht). After a very frustrating few days and a tough night, in the wee early hours of the morning we got breeze.  It started with just some squally stuff, then turned into constant breeze. Happy days, it’s so nice to be moving and moving along well.

“We had our smallest spinnaker up, then a couple of hours later did a peel. This time round the world crew member Matt Ogg got to hang out on the sheet, changing the sheets in preparation of the hoisting of the new sail.”

The teams will need to be carefully monitoring weather over the coming days to ensure they put their yachts in the best position in the ITCZ to ensure the quickest passage possible.

All positions correct as of 1200 UTC.