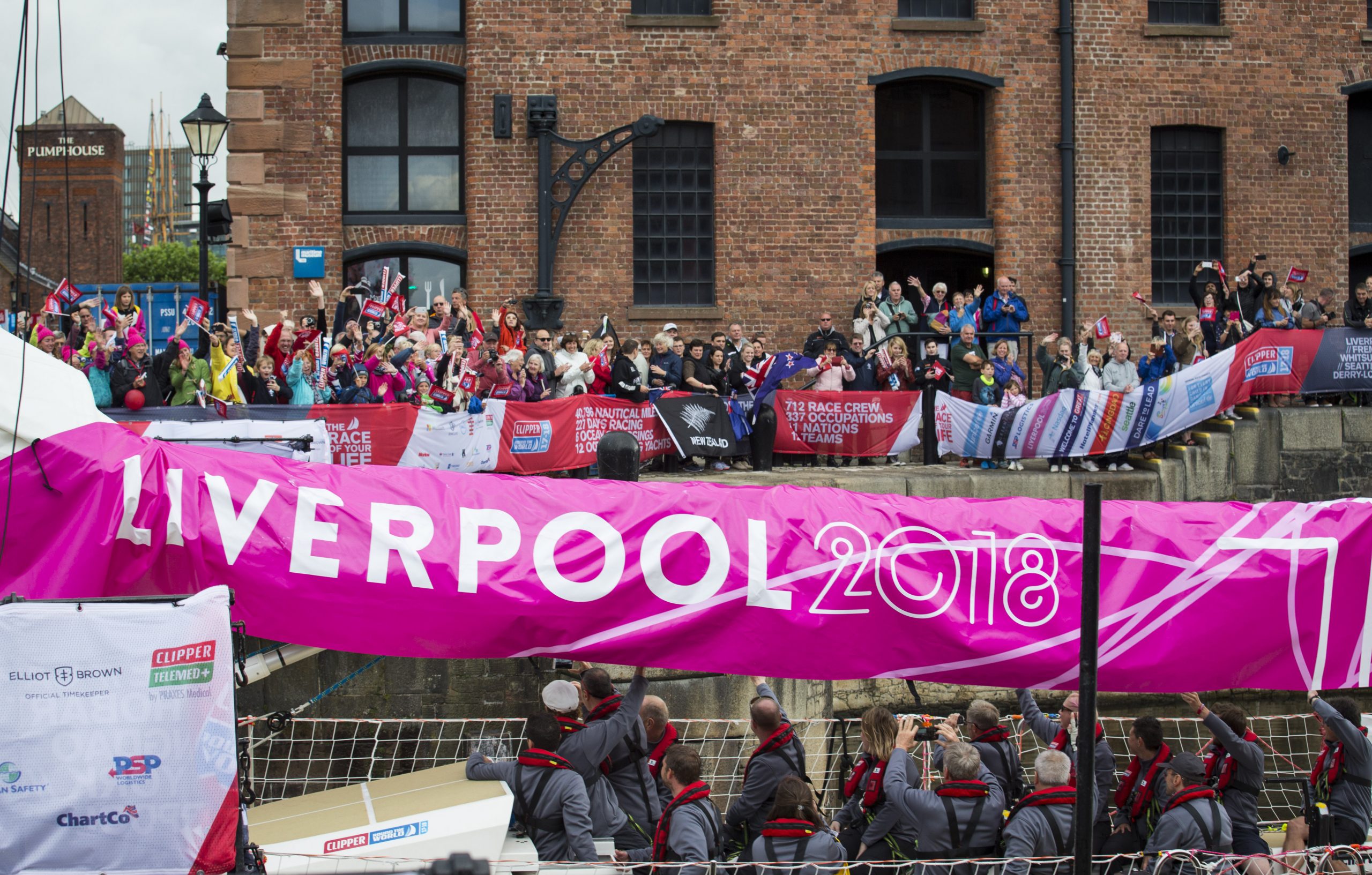 In just 50 days’ time, the Clipper 2017-18 Round the World Yacht Race will be reaching a thrilling climax as the fleet sprints up the River Mersey in a spectacular first-time crowd-facing finale which will conclude outside the historic Royal Albert Dock Liverpool, UK, on 28 July.

After racing some 40,000 nautical miles around the globe, the exhilarating power sprint finish will offer up to three bonus race points which will be added to the teams’ overall points tally. Given the current podium standings are separated by just 19 race points, with three race results yet to be claimed, the sprint could determine the overall Clipper 2017-18 Race finish positions for the coveted Clipper Race Cup.

Clipper Race Founder and Chairman, Sir Robin Knox-Johnston, said: “Since setting off from Liverpool nearly eleven months ago, the 2017-18 edition has been one of the most thrilling, closely matched ocean racing spectacles in Clipper Race history.

“After experiencing some of the most inhospitable conditions on the planet, the non-professional Clipper Race crew members will have raced over 40,000 nautical miles across six different oceans and will have visited six different continents by the time they return to Liverpool on 28 July this year.

They have seen nature in the raw, conditions that would terrify most sailors, but they have come through it and given themselves an experience that most people on this planet can only ever visualise.

“I am extremely fond of Liverpool and the send-off from the city last August was remarkable. I am very much looking forward to returning to the city for even bigger celebrations when the fleet races up the River Mersey with a sprint finish in front of Royal Albert Dock on 28 July.”

To celebrate the return of the Clipper Round the World Yacht Race, there will be a programme of performances and activities taking place at the Royal Albert Dock Liverpool from midday to 6pm on Saturday 28 and Sunday 29 July.

It will feature local arts organisations which represent Liverpool and other port cities and countries visited by the yachts since they set sail on 20 August last year. There will be performances from Katumba South American drum ensemble, One Latin Culture musicians and Pagoda Chinese Youth Orchestra and dancers.

Deputy Mayor and cabinet member for culture, tourism and events, Councillor Wendy Simon, said: “With just weeks to go, excitement is gathering as the city gears up to welcome back one of the most impressive and inspirational global sports events.

“When the race began in August, it boosted the local economy by £7.5million as thousands of people headed to our world heritage waterfront to give all the crews the send-off they deserved.

“We are hoping for a similar impact in July and I look forward to being part of large crowds giving a warm Liverpool welcoming home to the crews who have completed such an incredible challenge.”

Throughout the weekend, the bright red Clipper Race Roadshow Dome will be in place at the Race Village where visitors can discover more about the Clipper Race. There will be opportunities to try out virtual reality 360 headsets to experience a day in the life of an ocean racer, talk to crew members, learn about the technology on board or try your hand at the Marlow Rope challenge.

The Clipper Race yachts will also be opened up to the public to find out about what life is like on board, above and below decks, and the Liverpool 2018 team entry will remain in the city until Sunday 05 August.