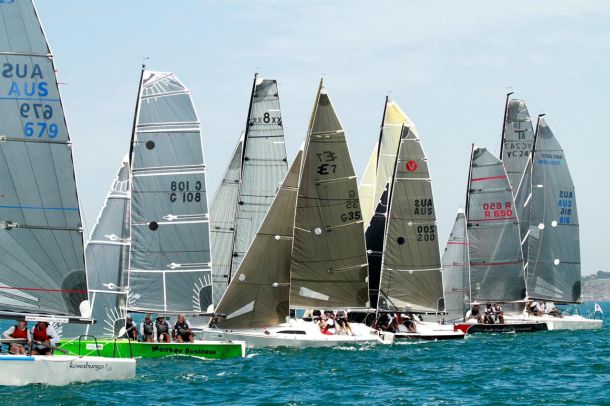 A late arriving sea breeze kept the Hogs Breath Sports Boat division and Melges 24s out past 5pm enjoying the best conditions of their opening day at Geelong’s annual Festival of Sails sailing regatta. Light early afternoon winds climbed from 5 knots out of the south to 14 knots from the ENE and finally to a decent sou’easter, completing the day’s gamut of shifting bearings.

The national title session for the multihulls finished yesterday and today the sports boats and Melges reserved the vast expanse of Corio Bay. Tomorrow, Friday January 23, 2015 the big boat component of the Festival will amass off Williamstown for a 9.30am race start then head south west to the regional city of Geelong for the Australia Day long weekend of point scoring and a chance to dip into the regatta spoils.

Around 220 boats will charge off the start line for the largest single start of a yacht race in the southern hemisphere and a key feature of the Festival of Sails which in 2015 is presented by Rex Gorrell Land Rover. The Hon. John Eren Minister for Tourism & Major Events will fire the start cannon and Cr Andy Richards from the City of Greater Geelong will fire the preparatory signal.

Steve Williamson’s Shaw 650 Dripping Wet made its regatta debut today in the opening two races of the sports boat division. It appears a short-lived competition foray for the Royal Geelong Yacht Club boat given Williamson has accepted a three year posting to China and leaves at the end of summer.

“This will be my first and probably last regatta,” the new skipper admitted. Helming the Shaw 650 is local sailor Brendan Garner.

After the two races Dripping Wet is well-placed in second overall and already has a victory marked on the scoresheet, in the second race. First is Julian Newton’s Game On. First Melges 24 is Peter Kendall’s Amigos.

The race committee attempted to start a third race, but 100 meters up the track the breeze went from 10 to 30 knots in the space of 10 seconds, sending the fleet ashore.

A bunch of 15 and 16 year-old Geelong Cadet sailors in their last weeks of the Victorian Christmas school holiday break are in charge of Peter Durran’s Elliott 7 called boatingcentral.com.au for the four day sports boat series.

Durran’s offer to the youngsters came just two days ago, requiring an urgent team t-shirt order to be placed and filled. The gear is due tonight and the ‘kids’ will be looking schmick for day two.

Skipper Tom Alexander, the reigning Cadet world champion, is a bit of a joker and when asked how he pulled the crew together he explained, “They are all the Cadet kids not doing anything else”. On the fact the youngsters are without adult supervision he added, “We are too young to have alcohol, we are probably the safest crew out here.”

The sports boat and Melges 24 divisions complete their series on Sunday January 25.

The Festival of Sails lead-in event, the APC Logistics Australian Multihull Championship that wrapped up yesterday, saw a mixed fleet of 16 multihulls complete their national title in a variety of conditions on Corio Bay.

Chatting in the pre-start of the non-pointscore multihull passage race from Geelong to Melbourne today, Ruffin said last weekend’s 25-30 knot winds provided the most exciting and challenging conditions of the series.  “It was excellent sailing! Corio Bay is fantastic; flat-water and a lot of wind enables you to handle more challenging conditions. All credit to Royal Geelong Yacht Club and the volunteers and the PRO Denis Thompson, I can’t fault the race management and Denis was incredible, you always knew exactly what was going on.”