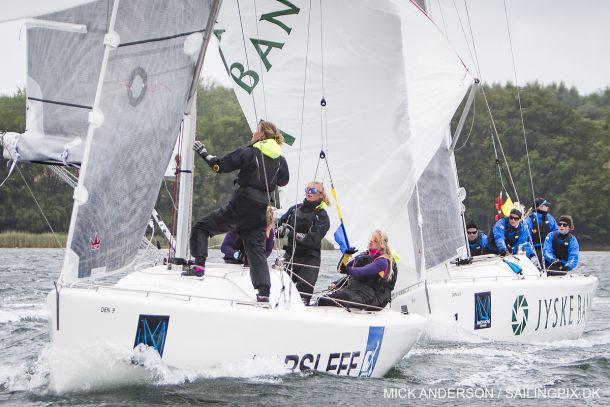 The second day of the 2015 ISAF Women’s Match Racing World Championship, the first event on the 2015 WIM Series, offered the sailors more waiting than sailing. A low-pressure front passing the event area caused steady wind speeds up to 40 knots, with gusts well over that, and a long postponement.

Just two flights were sailed in the morning, with Katie Spithill of Australia the only skipper to score two wins: “We understood the boat better today, but it’s still a long way to go in this World Championship. We must keep improving throughout the week, and make sure we use the lessons learned” she comments.

With heavy winds early Thursday morning and even more wind in the forecast, the race management of Match Racing Denmark in Middelfart took the safe way and ordered the sailors to take both reefs in the mainsail and change the genoa to a smaller jib. Spinnakers were still allowed, but many of the competitors chose not to use them if not absolutely necessary.

Katie Spithill and her crew of Alessandra Angelini, Jessica Eastwell, Aimee Famularo, Stacey Jackson waited the longest, but had to hoist on the last downwind of their second match: “We saw the other examples and didn’t want to jeopardize anything, but at the last downwind we were even and had to do something,” Katie explains.

The call was successful and the Aussies secured their victory in the match over local sailor Louise Christensen, to climb the results ladder to 6th place.

The first morning match between Swede Caroline Sylvan and Stephanie Roble of the USA was another breath-taking fight, with Sylvan aggressively attacking Roble in the pre-start. In just a minute the US skipper got penalized twice: “I misjudged the situations badly” Roble admits, after having had contact both with the opponent and with the pin end of the starting line.
“She tried to duck us, but instead hit our boat in the back,” Sylvan fills in.

The Americans then had to do one of their penalty turns right after passing the starting line, with Sylvan at the same time gaining a huge lead on the first beat. But when Roble & Co kept their spinnaker a little longer on the first downwind, they managed to pass the Swedish boat: “My crew got us back into the match with excellent work, but unfortunately we didn’t gain enough room to be able to take our second penalty in time,” Roble sighs.

“We were never really worried, we just had to hang on to her and not let her stretch away,” Sylvan states confidently.

Roble revenged herself in her second match, by clearly defeating Klaartje Zuiderbaan of The Netherlands. The American now sits in a three-way tie for 7th place in the regatta, where only the top 8 will advance to the quarter knock-outs: “There are still a lot of races left, so we’re pretty relaxed. We’re taking one match at a time, knowing that everything can happen in these tricky conditions,” Roble says.

The racing in Middelfart continues Friday with the round-robin, while the weekend will see the exciting knock-out quarters, semis and final to crown the World Champions.