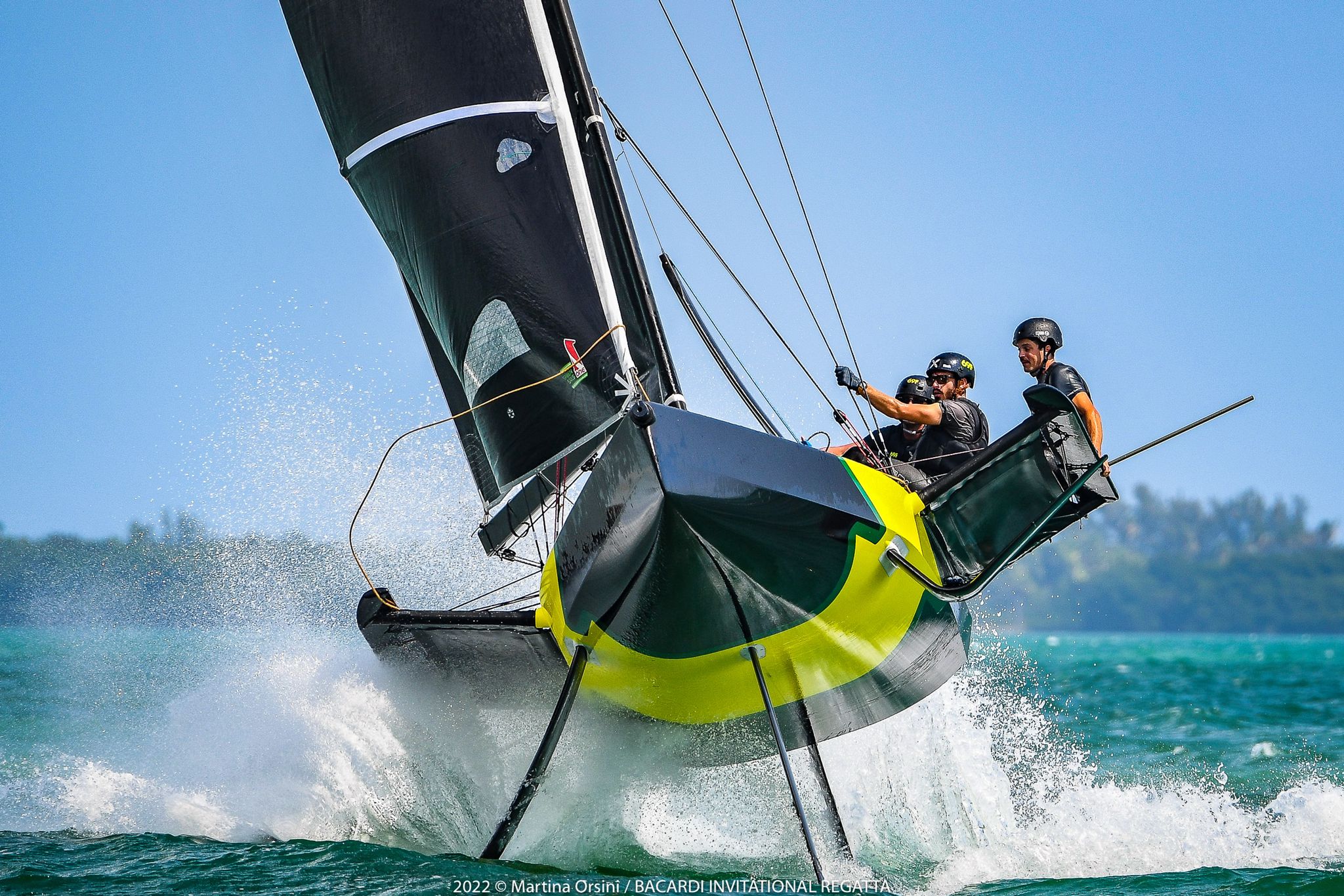 Miami, USA turned on another beautiful sailing day – brilliant breeze, sparkling turquoise waters and warm weather – as the Star Class was joined by the full line-up of one-design classes at the Bacardi Cup Invitational Regatta on Thursday, March 10.

Biscayne Bay was a spectacular vista, packed with boats who have converged on Miami from around the world. The Star contested the traditional one race, with three races wrapped up for each of the J/70, Melges 24, Viper 640 and VX One. The 69F, which made its BCIR debut, completed six races.

Across the racecourses, the breeze tracked from 10-18 knots, with the overcast morning giving way to sunshine. The forecast has so far delivered perfect race conditions and looks set to remain game on for Friday, March 11.

Post-race another keenly anticipated Bacardi happy hour got underway at Shake-A-Leg Miami, giving the perfect atmosphere to unwind and enjoy a glass of rum.

Racing got underway in a 10-knot breeze and very similar conditions to Wednesday. A couple of rain showers either side of the course for the second windward leg yanked the breeze, forcing a change of course.

Jack Jennings (USA) and Pedro Trouche (BRA) got to work straight away on ‘Pied Piper’, conjuring up more of yesterday’s magic to call the racetrack tune, lead from start to finish and claim another win. They shift up the leaderboard to fourth and sit just one point adrift of Diego Negri/Sergio Lambertenghi, who finished the race immediately behind and retain third overall.

“I feel really glad with the way we are sailing,” said Trouche. “We are feeling good with our routine. Every day in the morning we have breakfast together, briefing for the day and then we go out as early as we can, doing some practice. So it is working out, yeh.”

Defending Bacardi Cup Champions Mateusz Kusznierewicz/Bruno Prada hold firm as series leaders, but again struggled further back in the pack. Unlike yesterday, they couldn’t chip through and had to settle for a 6th place finish. Eric Doyle/Payson Infelise crossed the line in fourth place and hold firm in second overall.

The race discard kicked in which, though not impacting the order of the top three, has shuffled places behind and compressed the points a little closer, making tomorrow’s race a challenge for control of the podium places ahead of Saturday’s concluding race.

Three races of around fifty-five minutes were completed in 13-18 knots of breeze and superb planning conditions. With so much depth in performance, racing was close around the track, but the clear frontrunners scoring 1,3,2 to lead the J/70 fleet are Paul Ward (GBR) and his team of Charlie Cumbley/Elliot Willis/Matt Howard on ‘Eat Sleep J Repeat’.

Explaining their consistency, Ward said, “We’ve had a couple of really good days training. It is really, really nice conditions out here and we have felt really, really quick. We were going quick upwind, Elliott was doing a great job with the trim and then downwind Matt was getting a really good workout on the kite. We were just fast pretty much every direction, so it was a good day today.”

“Our plan was clean starts, get to the right-hand side and it seemed to pay off quite nicely,” continued Cumbley. “It always looked better the further you nudged that way for the most part.”

Race wins also went to Mexico’s Ignacio Perez and team on ‘Zaguero’, and the USA’s Bobby Julien with his crew on ‘Dingbat’. Mixed fortunes for Ed Lebens (USA) on ‘Reggae Shark’, who scored a masterful 2,2, before being knocked back to a 27th place finish in race three.

Winning in Miami is always tricky as teams face the challenging and notoriously unpredictable race track, and in a thirty-nine boat fleet packed with talent, there is everything to play for.

Getting into groove straight away for the 9-race series was 2021 and 2020 BCIR champion Bora Gulari (USA) with his team on ‘Powered by Moms’. He followed up with a fourth in race two, but then Gulari and two other boats were over the line for the start of race three, so will need the discard to kick in after race six to get back in the frame.

“It’s always great to come down to Miami and it is super exciting to be back at the Bacardi regatta this year,” said RJ Porter, son of Brian.

“We just came from Wisconsin where it was snowing yesterday, so great to be in the warmer weather. Competition was very tough out there, so being that consistent was very good for us. We’ve definitely got to take it race by race, get off the starting line that’s the most important thing, and just try not to get ourselves caught up in a corner.”

Drew Freides on ‘Pacific Yankee’ took the race 2 win, with race 3 in the hands of Travis Weisleder on ‘Lucky Dog’.

Racing on ‘Pacific Yankee’, Morgan Reeser, the 1992 Olympic silver medallist in the 470, was brimming after the day, saying, “I am probably the luckiest person in the world today! An amazing day, nice and warm, no foul weather gear needed and the rest of my team is so good.”

Explaining their race strategy, Reeser said, “When it is from the south, there is no land in the way, the shifts aren’t that big, so it is mostly boat speed. So the key is just clear lanes. Early in the day some storm clouds probably right better than left, then later in the day it turned into a sea breeze and it was left better than right. Just go fast, which was awesome.”

The ‘Pacific Yankee’ team have plentiful honours and World Championship titles between them, including five Melges 24 Worlds in the hands of Federico Michetti.

Front of fleet results were spread around, with a fairly even performance amongst the top boats on day one.

Three races down and their 1,3,4 scorecard gives ‘Vellamo’ helmed by Colin Santangelo the advantage, with Caterpillar’ helmed by Peter Ill 3 points back. ‘Evil Hiss’ who finished second in 2020, under the expert helm of Mary Ewenson raced a solid series, picking up a win in race two to end the day in third.

Escaping from the snow in Ottawa is Canada’s ‘Jackpot’ skippered by Brad Boston, who have only recently started sailing together and compete for the first time in Miami. Crew member Quentin Gallon grinned, “We are loving the sunshine and loving the people!”

“We had a phenomenal breeze all day,” continued Gallon on their fifth overall. “Awesome races. As we sailed throughout the day we just got better. We found our starts were our key thing, just bow down and power on. We are a little heavy crew, so we figured we could hike out the boat and really keep it powered up upwind. That worked great for us.”

The team finished second in the last race of the day, as Gallon explained, “On our last race we were doing great upwind and downwind it was all about the communication in the boat and finding the breeze. It was really key for us building as a team and we are excited for the next couple of days.”

2022 year marks the largest VX One fleet yet in Miami, with twenty-five new and returning teams.

Establishing themselves in the game early on and getting on the scoresheet with a sixth place and two race wins are Austin Powers/Monica Morgan on ‘Tudo Bem’, who lead by a one-point advantage. Kaitlyn Liebel/Mark Liebel racing ‘Another Bad Idea’ won the opener, following up with a 6,2 to place second overall.

“This is the biggest fleet of VXs,” commented Hayden Bennett, who finished second at the recently held VX One Mid-Winters and sits in seventh overall. “Flat water, big breeze, warm weather, you can’t really complain about too much.

“Miami always puts on a good show, so we always have nice competitive racing. It’s obviously great to mingle in with the other fleets, the social events are always perfect, the few days we are here is always a blast.”

The fully-foiling 69F three-person monohull made a spectacular debut at BCIR, flying at speeds of up 28 knots in the 14 knots of breeze.

Six races down and four wins to the ‘Miami Yacht Club’ Team puts them in pole, with Brian Higgins driving, crewed by Pietro de Luca and Nicolas Aragones. A race win to ‘Sail America’, helmed by nineteen-year-old Gavin Ball with siblings Pearl and JP Lattanzi places them in second. Third to ‘Clean Sailors Youth Racing’ skippered by Lukas Hesse who claimed the race 5 win.

“Every time we sail the 69F we are learning by the second,” said Hesse. “Reaching starts, single laps of a square course, and anything up to nine races in a day. It’s full-on, very intense and very good fun.”

The 69F contests an open format, so there is no limit on the number of races and all to count, putting the pressure on a consistent performance race after race

For the full results, see: https://yachtscoring.com/event_results_cumulative.cfm?eid=14633