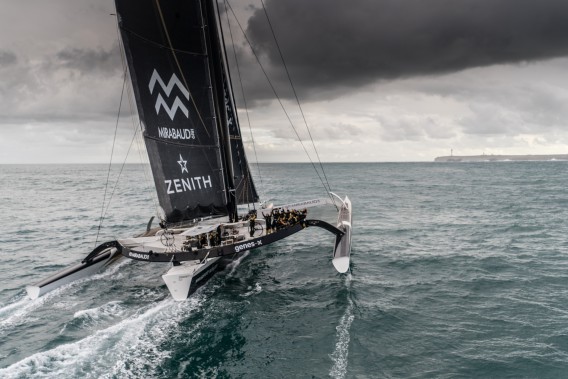 Spindrift 2 completes their lap around the world. Photo Spindrift Media.

Having just returned from the Jules Verne Trophy record attempt, the Spindrift team will be back at sea from the end of January, with Yann Guichard, Dona Bertarelli and their teammates tackling a schedule that will include three different circuits. They will still be competing in multihulls, but this time it will be the catamarans – on the World Match Racing Tour in a M32, the foilers in a GC32 and the Lake Geneva races in a D35. Together with their partners, Mirabaud, Genes-X and Zenith, the team in black and gold will face the best racers in Europe and the world. Spindrift 2 will also be at the heart of the sailing season, with participation in the Quebec / Saint-Malo transatlantic race and a new Jules Verne Trophy record attempt.

Some of the biggest names in sailing will be on the water this season! Skippers will be training for the America's Cup in 2017, match-racing specialists moving onto catamarans, and those coming from the Olympics who will learn how to fly… It was logical for the Spindrift team, which has a mixture of offshore and match racing specialists, to become part of the world and European circuits. Participating in these three tours is also key to making further progress and preparing for a new attempt of the round-the-world record. Just like the World Match Racing Tour, a discipline that the Spindrift team will discover.

“I’m honoured to be the only Frenchman invited onto the World Match Racing Tour (WMRT),” Yann Guichard said. “This is the first time I will participate in the World Match Racing Tour, which has five events, and then finishes with the World Championship in Marstrand (Sweden) in early July. And, from the end of January, the team will start training in Lanzarote on a catamaran fitted with curved daggerboards and mounted outboard racks, which can be handled by four. The first event will be in Fremantle (Australia) from March 2 to 7. I’m looking forward to seeing where we are against the best in the world in this specific discipline, especially since there are elimination rounds. The only French sailor to have been champion is Bertrand Pacé in 1994. It’ll be very rewarding to compete against specialists in close-quarter racing such as Taylor Canfield, Ian Williams and Björn Hansen. It’s a very international circuit.”

Perfecting the art of flight

Having already competed last season, the Spindrift team is back for a second season on the GC32 circuit. These extremely fast and challenging foiling catamarans are handled by a team of five. And though there were only five teams on the water in 2015, ten international crews are expected this year. The first event is planned at the end of May with four other ones in Southern Europe through September*.

“We started on this tour last year: the GC32 is a particularly demanding foiling catamaran,” Guichard said. “It's an easy boat to fly, but still very technical to go really fast. The races are always closely contested and this season, the fleet will be expanding again, which promises to be a great show. Flying has become a necessity for high-level sailing and these catamarans take off in 8 knots of true wind and can do more than 30 knots. There are five events in the calendar across the whole of Europe.”

The playground of Lake Geneva

Having competed on the D35 Lake Geneva circuit since 2007, Dona Bertarelli's team will be present for the seven events on the calendar: four in May and June and three in September-October. A two-time winner of the Bol d'Or Mirabaud and on the podium for the last two years, Ladycat powered by Spindrift Racing is aiming to climb up one or two steps this season.

“This flagship event in the Lake Geneva calendar represents continuity in high-level one-design multihull racing, as it is now entering its twelfth year,” Bertarelli said. “It’s still a hard fought circuit, combining skill and technology, and the Spindrift team will defend its colours again this year.”

The central objective of the Spindrift team remains firmly anchored in multihull disciplines, onshore and offshore. The trimaran, Spindrift 2, currently in the boatyard in Lorient for a full check up and some optimisation of the platform and interior spaces, will be back in the water from mid-April. Training sessions will be organised accordingly, with a view to preparing for the Transat Québec-Saint Malo (July 10), and making a second attempt on the Jules Verne Trophy in the autumn. What better way to conclude an internationally-focused year with its loyal partners, than to complete a new voyage around the world.

“The Spindrift team is going to diversify disciplines with these worldwide high-flying competitions,” Guichard said. “This will mean we can improve ourselves in all areas of the racing game and continue to develop before going back around the world with the maxi trimaran. We have to constantly challenge ourselves if we want to progress: in total, we’ll spend more than 250 days on the water.”