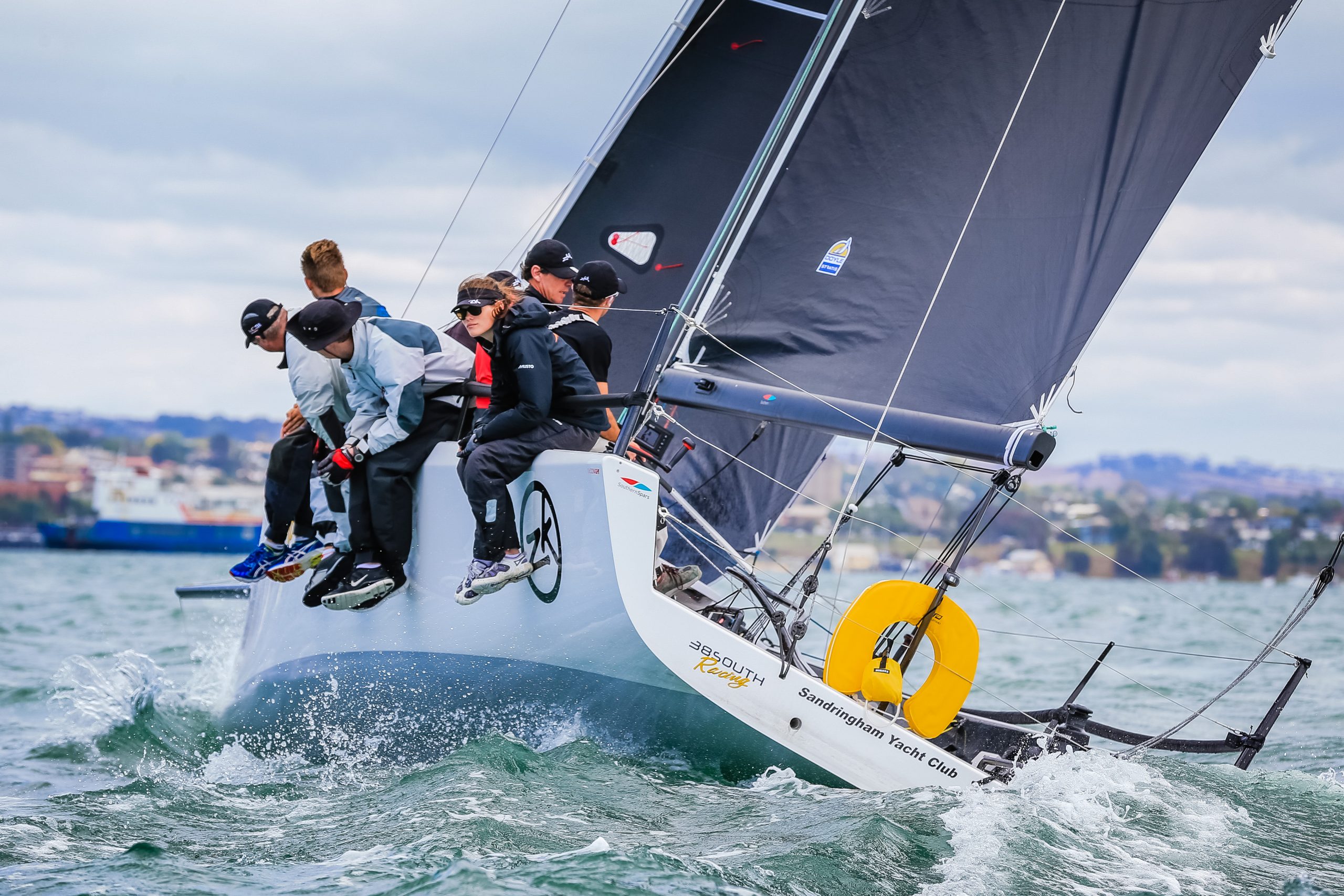 The Festival of Sails’ Melbourne to Geelong Passage Race fleet arrived into sunny Geelong throughout Saturday afternoon, slightly weather-beaten and thankful to reach Corio Bay’s calm water having punched into morning rain squalls then 15 knot average headwinds for most of the 32 nautical miles.

Two start lines lessened the chaos for the 225 boat fleet, but there was at least one pre-start collision off Williamstown at the top of Port Phillip bay involving Cam Rae’s Poco Loco, which suffered damage. White boats and sails against grey skies and ocean paled in the soggy start conditions, fluorescent wet weather gear and the rare brightly coloured boat and insignia the only vibrant tints.

Adelaide businessman Geoff Boettcher and his TP52 Secret Mens Business took the line honours gun among the monohulls in a time of three hours 49 minutes and Tim Pepperrell and Rob Reiger’s trimaran Bare Essentials came flying to the finish line off Royal Geelong Yacht Club with one hull out of the water, to be the first multihull.

An overall win in the Rex Gorell Land Rover Rating Series division 1 for Paul Buchholz’s DK46 Extasea was a total surprise for RGYC crew. “We stuck with the big boys and thought we might have been fourth or fifth; a win is a total surprise, and we are a local boat!” the delighted skipper said. “We went right to the middle of the bay after getting stuck behind a tug boat and picked up the new breeze first. Last year we had a prang and had to withdraw after the third race, so this is brilliant!”

Introduced to the Festival’s extensive divisional list for the first time is the Optimum Time Super 11 division for asymmetric boats between 8.5m and 11.2m, or 28 – 36 feet. Rod Warren’s J111 called Joust from across the bay at Sandringham took the opening race under AMS handicap.

Two MC31s made their world premiere in today’s passage race as part of the Super 11 fleet. “The boat was brilliant, just amazing,” Rohan Veal said of the first outing for his MC31, 38 South Racing. Due to an incident yesterday his sails only arrived at the Royal Yacht Club of Victoria at 8am this morning and were hoisted for first the first time as they approached the start gate. This was after working until 10pm last night to tick all the boxes before the boat’s much anticipated debut.

At the rate the back-markers are charging up the Hopetoun Channel to Geelong, the last boats are due to arrive before sunset. PRO Denis Thompson says it’s been a straightforward race with winds either side of south and brilliant conditions for the finish, flat-water and clear skies, and up to 20 knots of breeze for the closing stretch.

The crew of Cam Rae’s Thompson 920 Poco Loco reckon they have four to six hours work to repair what looks like a shark bite taken out of the boat’s wing in a pre-start collision. During the passage race they bucketed out 500 litres of water and also need to establish where the leak is coming from before their Super 11 competition restarts from 1230hrs on Sunday January 24, 2016, with three short windward/leewards planned.

All divisions are racing tomorrow on multiple courses starting from midday with the multihulls. The forecast is for 15kt southerlies.

Good crowds took in day one of the Shoreside Festival presented by Geelong Connected Communities with plenty of entertainment and hands-on activities on offer.