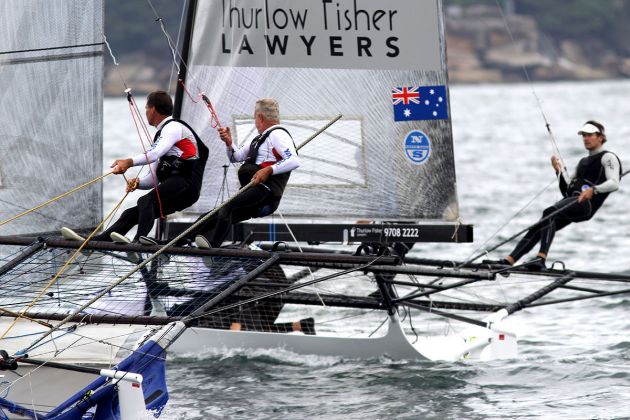 The Smeg team, of Lee Knapton, Ricky Bridge and Mike McKensey, has strengthened its grip on the Australian 18ft Skiff Championship after coming from behind to win Race 3 in a nail-biting finish on Sydney Harbour today. After a disappointing first windward leg from the start in Taylor Bay across the harbour to Rose Bay, they worked their way back to score a dramatic 4s win from the NSW champion Thurlow Fisher Lawyers (Michael Coxon, Trent Barnabas, Dave O’Connor).

The win gives Smeg a total of four points from the three races of the championship sailed to date, and a lead of six points over Thurlow Fisher Lawyers on 10 points.

In the very light South-East wind (1-8 knots), the heavy weather specialists Appliancesonline.com.au (David Witt) struggled and could do no better than 16th today, but still holds third place on 20 points. Triple M (John Sweeny) is fourth on 21, Gotta Love It 7 (Seve Jarvin) fifth on 23 and Mojo Wine (James Ward) sixth on 25 points.

With each boat’s worst placing to be discarded for the final points tally, there is likely to be some big changes over the final two races of the championship.

In the extremely light conditions, Marcus Ashley-Jones (Asko Appliances) and his team elected to sail west of Shark Island on the windward leg into Rose Bay, and the move proved a winner as Asko Appliances led Yandoo by 20s as they set off on the long spinnaker run to Robertson Point. Coopers 62-Rag & Famish Hotel (Jack Macartney) was in third place ahead of Thurlow Fisher with The Kitchen Maker fifth.

Every small wind directional change was critical and the positions within this group of five teams was changing regularly, and allowed the former JJ Giltinan champion Stephen Quigley to show his skills as he brought his young team on Alcatel One Touch into the picture.

Yandoo grabbed the lead from a bunched fleet at the bottom mark and shared the lead with Coopers 62-Rag & Famish Hotel at the following windward mark off Clarke Island.

Coopers 62-Rag & Famish must have infringed as the team did a penalty turn shortly after rounding the mark and lost valuable time to both Yandoo and Thurlow Fisher.

Although trailing narrowly at the Chowder Bay mark, John Winning’s Yandoo team tacked early and sailed to the western side of Shark Island while most of the other leading group elected to stay of the starboard leg across the harbour on the east of Shark Island. The move by Yandoo’s crew was a winner as the skiff held a 55s advantage over The Kitchen Maker at the Rose Bay mark.

Conditions being what they were, it was obvious that anything still might happen as the fleet still had four legs of the course (two windward and two spinnaker runs) to sail.

Championship leader Smeg had been totally out of contention for the lead up to this point but this time the Smeg crew elected to sail the spinnaker run back across the harbour to Taylor Bay on the west of Shark Island. Again, the move was a winner as Smeg came from a seemingly hopeless position to grab a narrow lead from Yandoo, Thurlow Fisher Lawyers and The Kitchen Maker.

Smeg extended the lead to 45s over Thurlow Fisher when they worked back to Rose Bay, but as the breeze became even lighter the race became impossible to predict. In a bowsprit-to-bowsprit finish, the supporters of the first two boats cheered their favourites home to a great finish.

While the conditions were very taxing on the competitors, the large spectator fleet were thrilled by an eventful and exciting day’s racing.

Race 4 of the Australian Championship will be sailed on Tuesday at midday.  NOTE:  THERE IS NO FERRY AVAILABLE TO FOLLOW THIS RACE.

Race 5 will be sailed next Sunday, 31st January and the Australian 18 Footers League will have its usual Spectator Ferry available, leaving Double Bay Wharf, alongside the clubhouse, at 2.00pm, to follow all the action.

Anyone planning to follow the race on the spectator ferry should make sure that they don’t leave it too late to buy their ticket.  The ferries have been packed for the past few weeks and  some followers missed out last Sunday when the ferry was completely sold out.