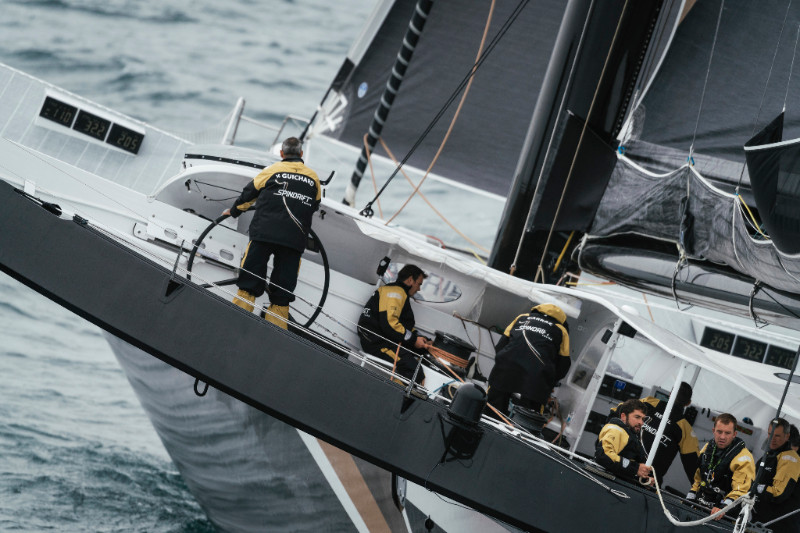 Jann Guichard at the helm of Spindrift. Photo Spindrift Racing.

Spindrift’s skipper, Yann Guichard (FRA), has carefully selected a crew of eleven sailors who bring with them a depth of sailing experience from the worlds of Figaro, Olympics and racing multihulls.  His crew include seven who formed part of the first attempt on the record, with the other five bringing multiple complementary skills to the team.

The current Jules Verne Trophy record, set by Francis Joyon and his crew last winter, stands at 40 days, 23 hours and 30 minutes, and Spindrift has spent much of the past two years optimising its 40-metre maxi-trimaran, Spindrift 2, in Brittany to take on this new challenge.

Twelve on board
Joining the team are Thierry Chabagny (FRA) just returned from a Solitaire and a Fastnet in the Figaro, Ewen Le Clech (FRA), who rejoins the trimaran having worked on updating it with Pascal Bidégorry in 2010.  Britain's Sam Goodchild joined Yann Guichard on the match-race circuit this season, having spent two years racing offshore trimarans.  Also joining is Thomas Le Breton (FRA), a former member of the French Olympic team in the Laser and then the Finn, who has recently returned from Bermuda where he was a tactician for the French challenge in the America's Cup. Finally, completing this group are Tanguy Cariou, ex-member of the French Olympic team and crew in D35, who will be on the first part of the stand-by, and then Erwan Le Roux (part of the Spindrift 2 crew for the Transat Québec-Saint Malo) will take over from November 26, 2017, when he returns from the Transat Jacques Vabre.

This five-man squad will join Yann Guichard and six crew from the 2015 attempt. These are sailors that Guichard knows well: Xavier Revil, Christophe Espagnon and François Morvan have all run Olympic campaigns together.  Antoine Carraz or Jacques Guichard have been part of the Spindrift team since its inception, and Erwan Israel is back onboard again as navigator.

Nine records in 24 years:
Yann Guichard is in no doubt of the incredibly tough challenge that lies ahead and has appointed Jean-Yves Bernot to be the onshore weather router for this attempt.
The original record set by Commodore Explorer was for 79 days 6 hours and 16 minutes, in the intervening 24 years the record has been almost halved and after iDec Sport’s successful challenge last winter, now stands at 40 days 23 hours 30 minutes.