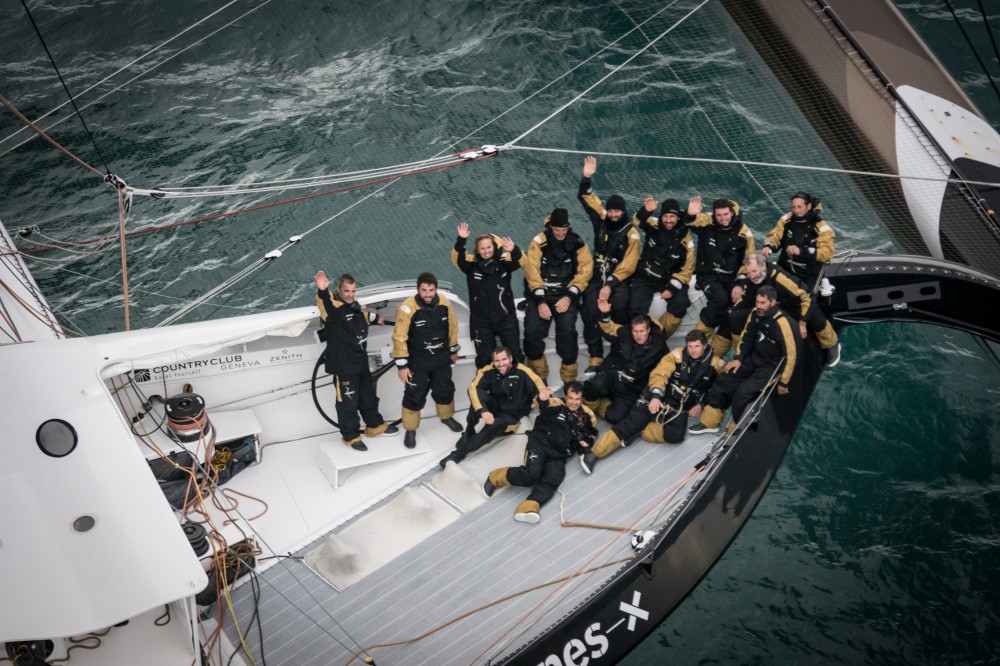 The Spindrift crew celebrate after sailing around the world. Photo Eloi Stichelbaut.

The sailors on Spindrift 2 crossed the finish line of the Jules Verne Trophy off Ushant at 15:01 UTC on Friday, after 47 days 10 hours 59 minutes and 02 seconds at sea. After nearly 29,000 miles travelled at an average speed of 25.35 knots, Spindrift 2 completed the circle on its first voyage around the world by claiming the second fastest time in history. The crew, led by Yann Guichard, did not better, on this attempt, the time set by Loïck Peyron (they were slower by 1d 21h 16’ 09”), whose record of 45 days 13 hours 42 minutes is still the one to beat. However, they were 20 hours 45 minutes 50 seconds faster than the time set by Franck Cammas in 2010, over this always demanding course. During its high-speed journey, the black and gold trimaran also improved three record times (Ushant-Equator, Ushant-Tasmania and Ushant-Cape Horn) and held, for a few hours, the record for the crossing of the Indian Ocean. One woman among 13 men on this record attempt, and the first to complete a Jules Verne Trophy course, Dona Bertarelli is now the fastest woman to have sailed around the world.

The crew is sailing to its home port and base in La Trinité-sur-Mer and is expected to arrive there at 21:00 UTC on Friday night. They will be greeted by the public and notably the schoolchildren who shared the adventure, along with the families, friends, project partners, supporters and onshore members of this young Spindrift racing team, who have prepared a warm welcome on the harbour. After the arrival of the trimaran, the sailors will enjoy sharing a drink and some oysters with the public.

Yann Guichard, skipper: “The passage south of the Cape of Good Hope was one of the most important moments for me, but then, finishing in front of Ushant is also a relief. Not in the sense of liberation, because I wasn’t a prisoner and I really enjoyed this round-the-world voyage, but it's time I have a little break. Of course, there was a bit of stress, but that’s part of my job.

This Jules Verne Trophy has been a series of firsts for me: going around the world, rounding the three capes, having so many days on the clock… And I really want to get back out there. The boat is perfectly adapted for this task, we’ll just need the weather to be with us. And then the South Seas, they’re magical. The Indian Ocean was rather grey, but in the Pacific we were treated to some incredible light when we went down to almost 60° South… But I’ll remember all the birds most: the albatrosses, petrels, fulmars and Cape petrels constantly following us.

My biggest fear was when we hit an unidentified object with the foil: I thought we were going to have to give up. I'm glad we’ve finished because since Cape Horn – and this goes beyond just the effect on the record attempt – the climb back up the Atlantic was as severe on the boat as on the crew.”

Dona Bertarelli, helm/trimmer: “This ascent of the Atlantic has been long, laborious, and it felt like time was standing still. Fortunately yesterday, we could feel the finish line because we passed the symbolic mark of being 500 miles from Ushant: it was a special moment and I didn’t sleep much last night because there was so much emotion and adrenaline. Completing this voyage around the world allowed me to achieve the goals I had set myself, even if we didn’t beat the record for the Jules Verne Trophy. I have no regrets because the essential thing was to get back to Ushant as quickly as possible and we did everything we could to achieve that.

The voyage was a great experience for me because we all know each other very well and everyone respected each other’s individualities. It was really nice because it’s a team of real friends. But it’s also because of having been able, somehow, to exorcise my fears, those fears of plunging into the Southern Ocean or being so far from anything. Through writing articles for the schools in France and Switzerland and continuing to communicate with the world and share my experiences, I never felt isolated or alone on this adventure.”

A first one together

The crew was able to manage a journey across the oceans for over a month and a half. The incredible experience accumulated on a voyage around the world showed that the optimisations made the previous winter have paid off: with its rigging slightly shorter but much lighter and more aerodynamically efficient, Spindrift 2 was safer in the wind and easier to handle in moderate winds, without compromising its qualities in light airs. But the three storm fronts and ridges of high pressure that cluttered the Indian Ocean after the Kerguelen Islands, the Pacific before Cape Horn, and the South Atlantic off Brazil, were too much even for the efforts and perseverance of this crew. And that is without counting an arduous climb up the Atlantic due to adverse headwinds at the latitude of Argentina and Uruguay, and an uncooperative Azores High between the Canaries and Florida. The whole Spindrift team can be proud of what has been achieved, and that they rose to the challenge and finished the journey despite the problems pitted along the way, such as breaking the lower part of the port foil in the Indian Ocean after hitting a UFO (unidentified floating object). It was a collision that caused a crack in the port hull and could have cost them the Indian Ocean record. Then, later, there was the sudden weakness in the mast (repaired at sea) off Uruguay.

The 14 sailors have set three new record times on this voyage around the world. The first came from the start at Ushant to the Equator in 4 days 21 hours 29 minutes, a staggering average of 30.33 knots on the theoretical route (the shortest route). The second, between Ushant and the South of Tasmania, symbolising the entrance into the Pacific Ocean, was 20 days 04 hours 37 minutes. Incidentally, Spindrift 2 fleetingly held the record for crossing the Indian Ocean in 8 days 04 hours 35 minutes, which was broken a few hours later by IDEC Sport, who also left from Ushant on November 22. Finally, the third record: Ushant-Cape Horn in 30 days 04 hours 07 minutes, which brought a lead of 18 hours and 11 minutes over Banque Populaire V.

This Jules Verne Trophy has also finished with the confirmation of Dona Bertarelli as the fastest woman to have sailed around the world. During her standby watches, she also focused on the ocean environment of a voyage around the world and shared her feelings, discoveries and logbook. And she corresponded, in particular, with 2,000 children from schools in France and Switzerland, who are partners of the Spindrift for Schools programme, to help improve their understanding of these maritime areas and the species, so often under threat, which live there.

There has also been a lot of life experience garnered along the miles covered across three oceans. A voyage around the world is not for the faint-hearted: from suffering the coldness of the Southern Ocean, to enduring the blistering Equatorial heat, braving the icy spray hitting your face at more than 40mph, performing a succession of manoeuvres in fading and fickle winds, worrying about the approach of drift ice and being trapped with 13 other people in a 20m³ box…