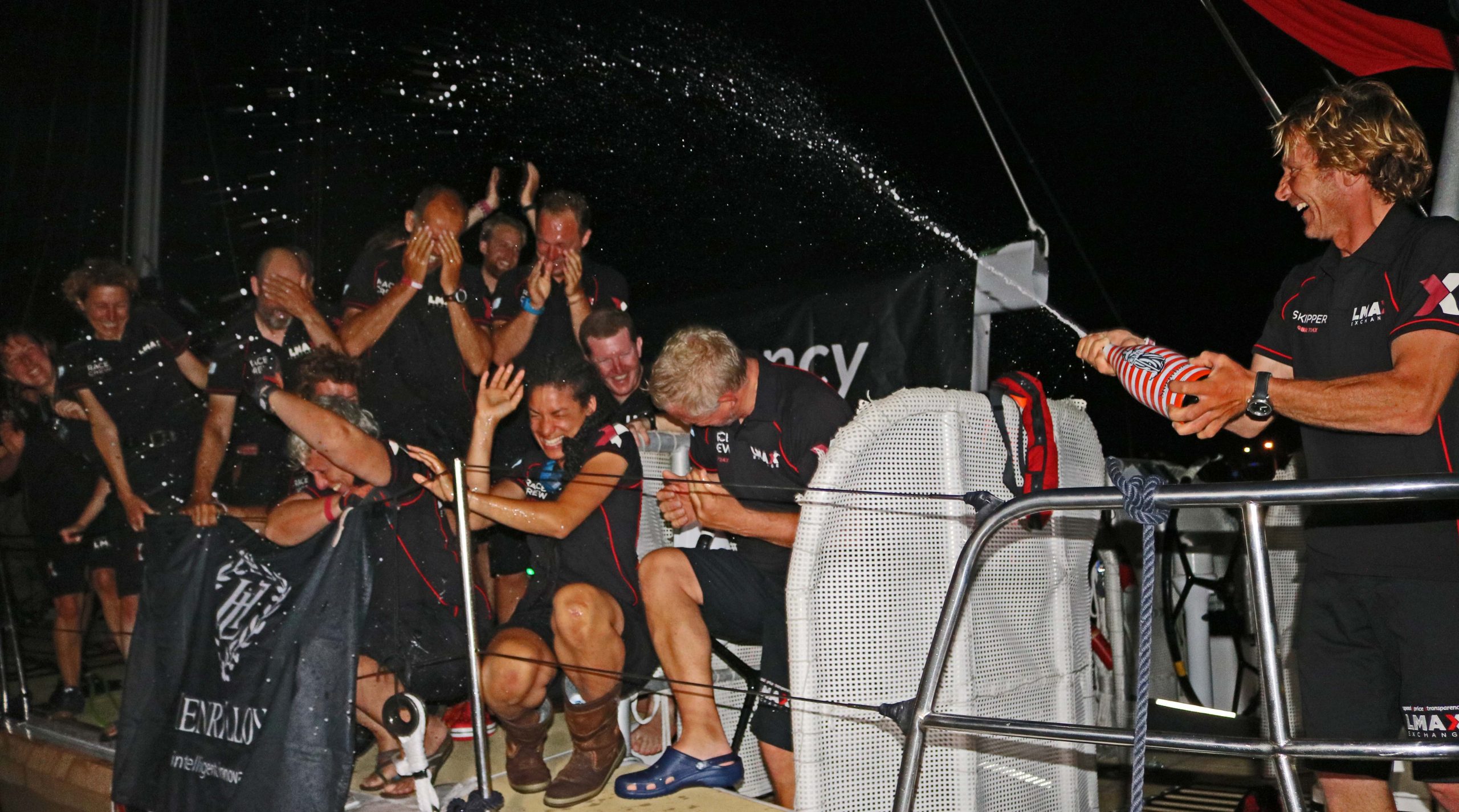 The tightest, most thrilling battle of the Clipper 2015-16 Round the World Yacht Race so far came right down to the final seconds as LMAX Exchange claimed an incredibly narrow victory over constant rival GREAT Britain in the Henri Lloyd Hobart to Whitsundays Race.

Just 42 seconds separated the teams which crossed Airlie Beach’s Pioneer Bay Finish Line at 2137.18 local time (1137.18 UTC) and 2138.00 (1138 UTC) after spending the past 48 hours locked in battle, match racing within close sight of each other up the tropical Queensland coast.

Garmin finished almost 90 minutes later at 2305 (1305 UTC) to take the third podium in the final race in this All Australian leg which had the most amount of lead and fleet position changes of all six races completed so far.

LMAX Exchange Skipper Olivier Cardin summed up the intensity of the race as he stepped ashore at Abell Point Marina, saying: “It was more than hard. Since the beginning, we had the battle with GREAT Britain for the Scoring Gate, then fighting against the current and dealing with heavy weather. Then we sailed into a wind hole and all the fleet were catching up and we were with GREAT Britain and Garmin. Then it has been just us and GREAT Britain the last two and half days. The finish was just crazy.

“In fact, as we approached the finish and we had a one nautical mile lead, it looked quite easy because we were going at the same speed, but then as we passed the first island and night fall came there were wind holes everywhere. It was really, really difficult. They won back some distance and nearly overtook us. We managed to keep the lead but it was difficult.”

Despite finishing in second place GREAT Britain Skipper Peter Thornton says his crew really enjoyed the close match racing with LMAX Exchange: “It's been brilliant. We were saying the other day how all the crew is loving how close the racing is with LMAX Exchange. We were neck and neck, the sun was rising and both under full spinnakers, everyone was taking photos and had big smiles on their faces, it was just insane.

“Of course for the Skippers it is the complete opposite. I'm thinking 'Aaagh, give me half a chance to have not such close racing. People are grinding and constantly looking over their shoulders and we're shouting 'Grind, grind, grind.' The hype is just brilliant.”

On the second day of racing GREAT Britain beat LMAX Exchange to cross the Scoring Gate first and pick up three and two additional bonus points respectively, meaning that both teams will end up tied for this race on points – at 14 apiece (12 + 2 for LMAX Exchange and 11 +3 for GREAT Britain). Just five points will still separate the teams in the overall Clipper Race leaderboard with LMAX Exchange still holding on to a narrow lead. However any penalty points for sail and equipment damage for this leg are still to be confirmed.

Commenting on his third place finish, equalling his best result to date, Garmin Skipper Ash Skett said: “It was an extremely tight race, throughout we had boats visible on our trackers and we never really felt like we were getting ahead. I could see the back markers on the trackers for most of the race, the fleet was very compact. I am very proud of the team, we’ve achieved an incredible result in such a tight race.

“My first ever yachting experience was 12 years ago in this marina, I stepped on board a boat for the first time and sailed the Whitsundays. I remember at the time thinking what a fantastic job and something I could see myself doing and as it transpired that’s what got me into the yachting industry and that’s why I’m here today. I was a complete novice back then I didn’t know anything about sailing, I grew up in the midlands in the UK so it was a whole new experience for me but one that stuck with me and now I couldn’t see myself doing anything else.”

After completing the gruelling Rolex Sydney Hobart Yacht Race, the Clipper Race fleet departed Tasmania seven days ago to cross Bass Strait for the third time in as many weeks as it headed 1,631 nautical miles north up the Eastern Australian coastline, this time in less punishing conditions than the 50 knot gusting on-the-nose winds faced during their previous races.

Aside from a few hours where a low pressure system slipped off the continent at the latitude of Sydney, Race 6: The Henri Lloyd Hobart to Whitsundays Race provided fast reaching conditions with the wind predominantly coming from the south. The main tactical decision for Skippers was whether to take an inshore or offshore route in order to avoid the worst of the East Australian Current before navigating the Whitsunday Islands to try to benefit from the best currents.

Whilst the next eight boats are within ten hours of joining the first three teams into port, Mission Performance has just under 300 miles still to go after it diverted to provide aid to distressed yacht M3 a few days ago in a storm, which involved crew member Gavin Reid transferring and going up its mast to help retrieve a stuck team member. Mission Performance will be awarded 11 hours 39 minutes in redress for their actions, meaning final standings for the Henri Lloyd Hobart to Whitsundays Race will not be confirmed until the team crosses the finish line.

The Airlie Beach stopover marks the first time the Clipper Race fleet has ever visited the Whitsundays region in Queensland, world renowned for its tropical coastline and 74 islands right in the heart of the Great Barrier Reef.

Abell Point Marina is one of the largest marinas in Australia and making a name for itself as the benchmark marina in the Whitsundays and along the east coast of Australia.

The Clipper Race will depart Australia for Race 7 to Da Nang, Vietnam on Monday 18 January.