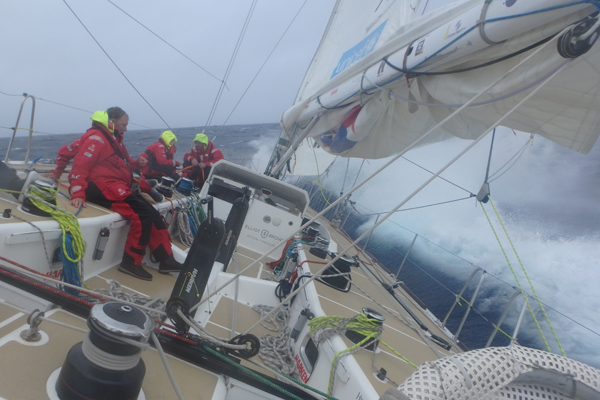 The Henri Lloyd Hobart to Whitsundays Race is shaping up to a tense and dramatic finish, as once again in the last 24 hours, the lead has changed hands, and as the teams yoyo up and down the leaderboard, two thirds of the fleet is now within 300 nautical miles of the finish line

If the favourable winds forecast materialise and the teams navigate through the reefs safely, then the winning boat could arrive in Airlie Beach in 36 hours’ time (during the night of Saturday 9 or early Sunday 10 January local time).

Deputy Race Director Mark Light says: “The Clipper Race fleet is still flying along and will have favourable winds as it gets closer to the finish. This one is going right down to the wire and could prove to be one of the closest finishes so far! The lead has changed hands many times and I feel that there yet could be some more twists and turns before this race has run its course.”

While the crew is enjoying the warmer climate and champagne sailing conditions, the Great Barrier Reef poses many unique threats, as third placed Garmin Skipper Ash Skett warns: “We are now entering waters that are completely surrounded with coral reefs and offshore islands. This means that we have to be extremely vigilant about where we sail the boat. One lapse of concentration or a wrong move could see us hitting a hidden underwater obstacle if we were to veer from our intended track.

“When you are sailing downwind, the wind direction will often dictate what your course is, so it is up to the navigators to ensure that it is a safe one.”

Garmin, which chose to sail an onshore route from the beginning of the race now finds itself behind GREAT Britain, which regained the lead overnight, and LMAX Exchange, two of the teams that moved closer inshore after heading east for the Scoring Gate in the early stages of Race 6.

Derry~Londonderry~Doire, which was leading this time yesterday, now finds itself in fourth, and while the team is frustrated, Skipper Daniel Smith knows a podium place is still within reach: “We are working hard to make up mileage on the lead boats. We had hoped to slot back in closer to the front but a wind shift favoured the inshore teams and what was a decent lead became fourth place as we worked our way back to the rest of the fleet.

“GREAT Britain, LMAX Exchange and Garmin aren't too far in front andIchorCoal and Da Nang – Viet Nam are nipping at our heels, so we push on, keeping speeds up and waiting for opportunities to better our position. There is still all to play for.”

Derry~Londonderry~Doire is only 0.6 nM ahead of Da Nang – Viet Namwhich in turn sits less than 3 nM ahead of IchorCoal and Unicef, showing how the smallest of margins will decide the placings in this tightly fought contest. ClipperTelemed+ has slipped down to eighth place but it is still only 27 nM behind the current race leader.

A slight gap has opened up from there, with ninth placed Qingdao a further 35nM back, and PSP Logistics and Visit Seattle have their own dual going on for tenth place . After 1300 nM of racing they are separated by just over one nautical mile.

Meanwhile at the rear of the fleet, in complete contrast to the conditions the front runners currently face, Mission Performance, which is due redress upon arrival into Airlie Beach for going to the aid of a privately owned yacht in distress, experienced heavy weather conditions which led to a dramatic night on board. Skipper Greg Miller explains: “We were expecting heavy weather and it hit us a massive gust, pinning us over at around 50 degrees and moving the yacht sideways at around 15 knots!

“I got to the helm station and took a look at the wind speed indicator reading 70 knots. This was a very sustained gust and we must have been pinned on our side for at least four minutes. We got the yacht under control and sailing again. Luckily the strong wind was going the way we wanted to go, so for three or four hours we were bare-poling. This is where you drop the sails and the wind basically pushes the transom, rigging and anything else that is sticking up out of the water. We managed a massive 17 knots under bare-poles!”

Remember to keep an eye on the ETAs to Airlie Beach and please note that teams are due in the marina approximately one hour after they cross the finish line.

If this has whet your appetite and you would like to join the Clipper 2017-18 or 2019-20 Race crew then please contact our recruitment team for more information.

All positions correct at 0900 UTC.