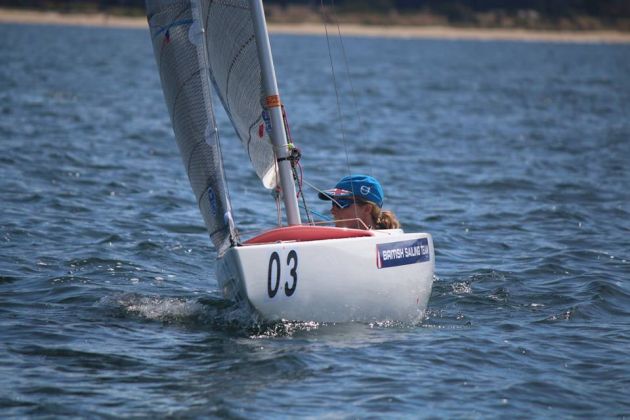 Despite a collision involving Megan Pascoe (GBR) and a start signal misunderstanding by Matt Bugg (AUS), the two disabled sailors still finished first and second in the World open championship for the International 2.4mR class, which ended on the River Derwent yesterday.

The ten race regatta ended on a warm summer’s afternoon in Hobart, with the south-easterly seabreeze of 10-15 knots, gusting to 18 knots, not only cooling conditions but also providing the 31 sailors with ideal racing weather for these small, single-handed one-design keelboats.

Pascoe, a 29-year-old disabled sailor from Weymouth on the South Coast of England, confirmed her new status as 2016 world champion with a second in race nine while Bugg kept up his consistency with a fourth.

However, Pascoe became involved in a minor entanglement with another competitor during race 10 and lost considerable ground taking her ‘penalty turns’. She ended up 11th in fleet.

Bugg lost vital time soon after the start when he appeared to hesitate in sailing to windward when an individual recall for a premature start was signalled.

Two other yachts returned and restarted and the signal flag was lowered, meaning that Bugg was not a premature starter after making a near perfect start to the race.

As the breeze freshened, Bugg, who last week won his sixth Australian championship, sailed his way through the fleet to finish eighth.

Both Pascoe and Bugg chose to drop yesterday’s final results as their second discard from the 10 race series, leaving the British sailor with a net 13 points and the Tasmanian with a net 34 points.

The 14-boat contingent from Finland dominated results on the final day, winning race nine and filling the first four places in race 10 as they enjoyed the fresher sailing conditions.

McCullum placed a close sixth overall on 58 points followed by Lisa Blackwood (AUS) a member of the Derwent Sailing Squadron, on 61 points.

Next sailing for Megan Pascoe has not yet been decided as she just missed representing Great Britain at the Rio Paralympics but for Matt Bugg its soon off to Europe to continue regatta and training to represent Australia at Rio.