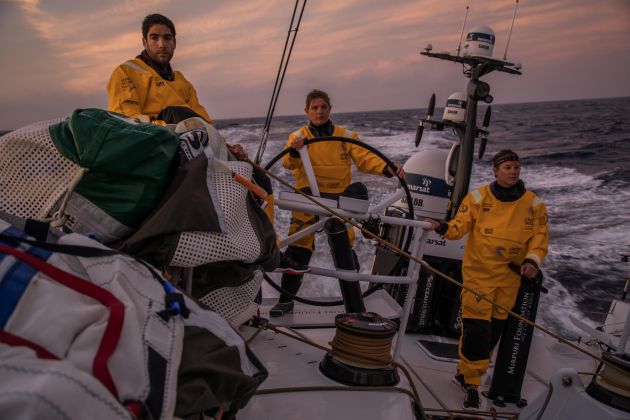 Speeds are up as the Volvo Ocean Race fleet left the island of Porto Santo to starboard early this morning and turned north, aiming towards the final mark of the course before the finishing line off Lisbon, Portugal.

Vestas 11th Hour Racing, having survived a scare when a ballast tank hose failed, dumping 800 litres of water in the bilge, was first around and is now charging towards the new ‘virtual mark’ set yesterday, dubbed Porto Santo North.

It’s nearly directly downwind, meaning the teams will be gybing towards the mark, but this part of Leg 1 is largely setting up as a speed contest.

MAPFRE isn’t making it easy on the leader. With a different sail configuration, the Spanish team has been able to match speed with the Vestas boat, while sailing a slightly more favourable direction towards the mark, making a gain of nearly 4-miles between the 07:00 and 13:00 UTC position reports.

“Conditions are pretty nice,” said Rob Geenhalgh on MAPFRE. “20 knots of wind, and making about 20 knots of boatspeed, but everyone has good speeds and good wind now… This run down to the waypoint is a bit of a boatspeed charge. We’ve stayed out to the east a bit, hoping we can cut that deficit down to less than 10 miles by the waypoint.”

The AkzoNobel boat continues to hold third place, relatively safe compared to the chasing pack but as yet unable to make inroads on the pair in front.

Positions in the chasing pack remain in flux. Less than 10 miles separate fourth from seventh place. Every mile gained is hard-earned. Any lapse is punished.

“The subtleties of racing these boats is something we’re still working on,” said Steve Hayles, the navigator on Sun Hung Kai/Scallywag. “At times we’re quick, but at other times, our pace is lacking.

“But an opportunity to race hard against teams like Brunel and Dongfeng, second-generation teams who have done this race before, is an awesome opportunity to learn.”