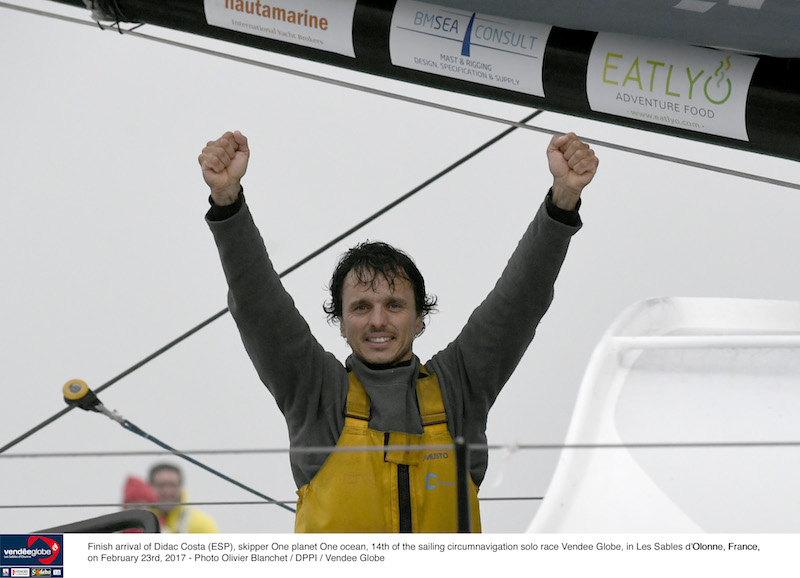 Spanish solo ocean racer Didac Costa crossed the finish line of the Vendée Globe non stop solo round the world race at 0752hrs UTC this Thursday morning. In taking 14th place, the 36 year old Catalan fireman, an amateur racer who would like to further his career as a professional, fulfils a childhood dream inspired by the pioneering Spanish soloist, the late José Luis de Ugarté, who became the only Spanish sailor ever to finish the Vendée Globe in 1992-3 in 134 days and 5 hrs. His race time for the 24,499 miles course, Les Sables d'Olonne to Les Sables d'Olonne is 108 days, 19 hours, 50 minutes and 45 seconds. He actually sailed 27,964 miles at an average of 10.71 knots.

The tenacious, driven Costa has succeeded with one of the smallest budgets of the 29 skippers who started the race on November 6th. Barcelona based Costa completes his second non stop round the world race within the space of three years, again racing the evergreen IMOCA 60 footer which was built in 2000 as Ellen MacArthur's Kingfisher. Along with Aleix Gelabart he finished fourth in the Barcelona World Race in April 2015. He received a huge, passionate welcome back to Les Sables d'Olonne, not least from the Les Sables d'Olonne firemen who stood by him and helped him after he had to return to the start port to make repairs only 90 minutes into his race.

Didac Costa suffered a sudden and significant ingress of water only 90 minutes after the race started and so had to return immediately to Les Sables d'Olonne. With his engine – on which he relies to generate vital electrical energy – jeopardised by the salt water and his recently replaced electronics damaged substantially because his batteries and wiring were under water, when Costa returned to Les Sables d'Olonne it was in no way sure he would be able to re-start the race for which he had staked his future personal financial security. It was in fact only because of the solidarity and initiative of the his Les Sables d'Olonne fire service counterparts that Costa was able to re-start the race.

The Spanish skipper's race had many emotional moments, not least one month before the start period when his boat was struck by lightning at home in Barcelona. He owes his race to the intervention in Les Sables d'Olonne of local engineer Joël Aber who alerted him and his team to the urgency of immediately stripping and cleaning his engine to counter the salt water damage. It was the Friday after the start when he could get going again. He restarted with over 700 miles to the next skipper. He started concerned that he might have to complete his whole round the world in isolation with no competition. But in the Indian Ocean he engaged with French skipper Romain Attanasio and their subsequent duel was one of the most prolonged and intense battles of this eighth edition of the race. It was the competitive inspiration that Costa had sought and took him to his limits physically. In the end he has finished about 24 hours ahead of Attanasio.

Costa is a remarkable character, a tough Catalan fighter with a fiery spirit and a huge heart. In 2015 just 48 hours after finishing his 90 day Barcelona World Race he immediately embarked with race winner Jean Le Cam to help deliver the winning boat from Barcelona back to Brittany. And in the latter weeks of this race when he had caught to within 300 miles of Rich Wilson he confessed to Race Direction that he doubted he could pass Wilson because the veteran American ‘is too nice a guy.'

All the emotions and drama of the build up to the start, the gun and the lineup were just starting to subside, Costa was slowly finding a rhythm with the boat he knows so well when it became obvious he had a big problem. When he looked below the was water flooding inside and it was already up to the level of the engine. In the stress and excitement he had forgotten to de-activate the ballast scoop and a ballast pipe had blown off at the valve. The batteries and the engine were flooded. He knew immediately there was no alternative but to make the agonising U-Turn just 90 minutes into the race he had fought so hard to make the start line of.

Costa arrived back to the pontoon in Port Olona at 1800hrs. As well as his small shore team there were many members of other shore teams there to help, as well as the pompiers, the firemen of Les Sables d'Olonne with whom Costa has built strong bonds with before the start.

It was through the quick thinking of the firemen that they called in a mechanical ‘genius', an engineering magician who warned them: ‘If we don't save the engine immediately – and we have less than three hours to do that – the race is over for ever.'

He started work immediately and, without any exaggeration saved Costa's race. “Without him, his prompt advice and his intervention Didac would not have left the dock again,” recalls project manager Jordi Griso.

The solidarity shown to Costa's Spanish team was extraordinary but very much within the ethos of this edition of the race. It was not just the other teams who mucked in but the Les Sables d'Olonne firemen were totally involved, even if sometimes it was just moral support, tea, coffee and pizzas. The same engineering guru masterminded a change to the charging system, using a double alternator system off the engine rather than the existing generator.

Three days after the start the boat was ready to go again. But because there was still more than 40kts in the Bay of Biscay, the anxious Costa almost had to be restrained from leaving for a further 24 hours.

When he finally left the dock again on Friday 10th November at 1140hrs UTC he was 1134 miles behind the leader and 770 miles behind the nearest competitor Sébastien Destremau. But Costa was initially blessed with favourable conditions all the way down the Atlantic. In fact he made only one gybe, a pretty unique weather pattern continuing to prevail. He pressed hard. His initial concerns that he would spend the whole race in his own proved unfounded. Even so for the first week and a half Costa did not look at the position reports at all. He bowed to the task of sailing his boat as fast as he could.

In the South Atlantic his endeavours were rewarded and on December 7th, 850 miles west of the latitude of the Cape of Good Hope he passed Destremau and was up to 22nd place. Two days later, he also passed Romain Attanasio. The French skipper, a renowned Figaro class solo racer whose Famille Mary-Etamine du Lys is of the same age and speed potential as Costa's 2000 launched former Kingfisher, had to divert to a bay east of Cape Town to make a repair to his rudders. This allowed Costa to pass. Through the Indian Ocean Didac Costa hit a good pace, presses his boat hard and extended from just over 200 miles ahead of Attanasio to be 450 miles ahead at Cape Leeuwin. His average speeds of 16kts over successive 24hr periods were close to those achieved with Aleix Gelabert during the corresponding period two-handed in the Barcelona World Race. But Costa's technical problems really started to bite when he was south of Australia. Because of his very limited budget he had only managed to buy a new mainsail and a new G2 genoa. Otherwise his sails had already been once around the world on the Barcelona World Race. At the Equator on the way down the Atlantic, literally as he crossed the Equator his workhorse G1 genoa blew up. In three brutal days he lost three more sails, the blast reacher, J3, and the Fractional Zero. In fact his morale sank to an all time low, and were it not for the exceptionally close and evenly matched race against Attanasio which ensued, it is sure that Costa's race would not have been as exciting and engaging. The duel which then raged from the south of Australia, through the Pacific, around Cape Horn and all the way up the Atlantic until the final weeks kept the two skippers highly motivated day after day, week after week. The pace was exhausting for both. All the time Costa considered himself the underdog, confiding several times to Griso that he was sure that Attanasio's Figaro racing would prevail. ‘But I am going to make him suffer, to work him so hard to pass me,' he wrote to his shore manager Griso.

South of Australia Costa suffered a succession of failures. After a screw in the steering arm failed he had to replace the hydraulic arm and the pilot software did not recognise the new arm and went haywire. He became dangerously tired and demoralised. ‘I have to sleep. I am so tired,' he told Griso. Attanasio got over 100 miles ahead. Under New Zealand Costa's mainsail split and he sailed 48 hours with no main. Attanasio passed several times. At Cape Horn on 20th January Attanasio was 100 miles ahead. But up the South American coast the duel was nip and tuck. At one point at the latitude of Uruguay they were less than half a mile apart and filmed each other and then spoke regularly on the VHF. But the French skipper also suffered more mechanical failures, losing a daggerboard. But in fact ultimately, just as it did for the race winner Armel Le Cléac'h in the duel with Alex Thomson, the advantage always stayed with the leader. Costa was able to make the break from Attanasio at the Canary Islands progressing to be more than 400 miles ahead in the final days. But their duel has been one of the outstanding stories of this eighth edition of the Vendée Globe.

“I feel very good, very happy to have finished after all the hard work to get here. Being at the start line was already very complicated with the problems we had. The most difficult thing was to manage the problems and damages I had on the boat, the problems with the sails and taking care of the things that we changed at the start. This is a very long race, and it gets really hard.”

“Romain has been an incredible motivation for me, to be able to sail neck and neck for more than two months …. It is something that I really appreciate because I have learned a lot. I'm looking forward to seeing him to congratulate him.”

“When I left Les Sables for the second time and with 28 boats ahead, finishing 14th was unthinkable. I have finished the race and in a good position, so I am super happy.”

“The firemen in Les Sables have been very kind to me. Their help has been vital, as without them we probably could not have started again. They are a very important part of this project. I will always be grateful for their help.”

“To be alone for so long becomes difficult sometimes, but I have felt good. It was a new experience for me. It would have been better being alone 80 days than 100 (laughs), but that's fine. I already knew my boat from the Barcelona World Race I did with Aleix, but things are different when you sail alone, perhaps even more than I expected. I had not trained solo and I have been learning a bit on the fly. I would like to be able to continue learning in a safe project with guarantees. It does not make sense to do the same thing again. If there is a chance to do it right, I would like to.”