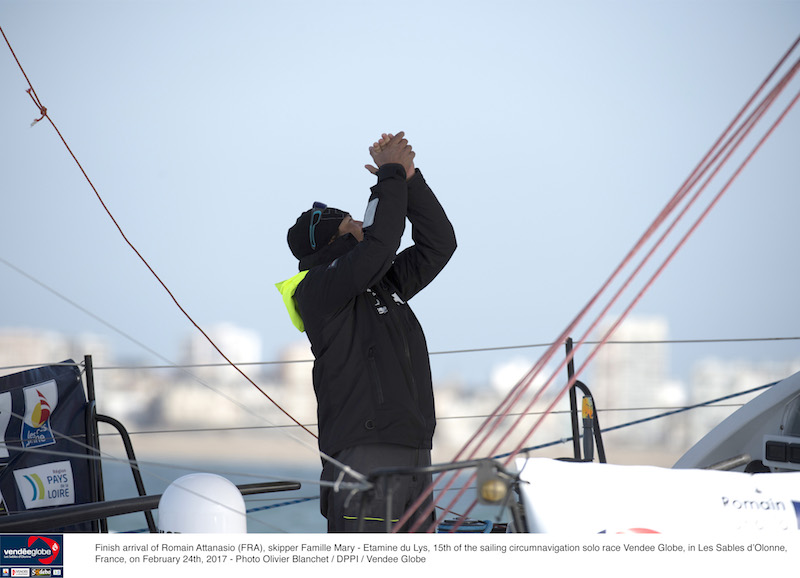 French skipper Romain Attanasio, sailing Famille Mary-Etamine du Lys, took 15th place in the Vendee Globe non stop solo race around the world this morning (Friday 24th February) when he crossed the finish line at 1006hrs UTC. The elapsed time for the French skipper who raced the 1998 launched IMOCA which was originally Catherine Chabaud's Whirlpool is 109 days 22 hours and 4 minutes. He sailed 28,569 miles at an average speed of 10.83 knots.

For the 39 year old solo racer who has a diverse background in offshore and ocean racing, completing his first Vendee Globe is the culmination of a personal goal, stepping up from singlehanded racing in the Mini 6.50 and in the solo one design Figaro class, to take on the pinnacle solo ocean race around the world. Attanasio took over fifteenth place early on the final morning, passing Conrad Colman who had raced the final 715 miles of his Vendee Globe under jury rig. Since repairing his rudders in South Africa Attanasio raced a hard, intense duel with the Spanish skipper Didac Costa, the pair racing older boats which both have storied histories. Ultimately Costa, on the former Kingfisher of Ellen MacArthur managed to escape into better wind pressure on the transition out of the NE'ly trade winds and went on to take 14th place, just over 24 hours ahead of Attanasio.

A talented navigator in his own right who sailed on the ORMA multihull circuit with Franck Cammas world championship winning crew and on the Maxi catamaran Gitana XI, Attanasio is best known as a leading Figaro class sailor who twice finished in the top 10 of the French solo offshore championship. He raced twice across the Atlantic with his British partner Sam Davies – who herself has raced two Vendee Globes, finishing fourth in 2008-9 and who has been his project manager. As such he had never sailed more than 21 days solo before he started this race. “It's a bit worrying, as I don't know where I'm going. I'm keeping myself busy trying not to think about that too much. Otherwise, it would be terrifying,” he said pre-start.

His race was going well, increasing in confidence and among a competitive group of boats, just behind fellow rookie Eric Bellion, when in 18th place he hit an unidentified floating object at around 1130 UTC on Monday 5th December. He was around 470 miles south of Cape Town when his boat, Famille Mary – Etamine du Lys collided with the UFO, which damaged both his rudders. He took the decision to head for Cape Town to attempt to carry out repairs. Two days later on 7th December he reached Simonstown, to the south east of Cape Town at around 1800hrs UTC. After two days of hard work carrying out repairs, the French skipper managed to replace his port rudder and repair his starboard rudder without assistance. “If I'd known it was going to be like this I wouldn't have come,” he laughed. “It was so hard. From detaching the rudders and then dragging them up onto the deck. I repaired one of the rudders and switched the other, which was an operation and a half. Crucially, I suffered delamination on the bottom of the hull over a 2-metre strip at the back. Repairing that took a huge amount of time.” When he set off again Attanasio had to sail upwind in a 25-30 knot breeze to rejoin the fleet in 21st place having lost 1200 miles on Bellion.

On January 2nd Attanasio told Race HQ in Paris: “It's frustrating being at the rear. Those ahead have made their getaway, but at least I'm still racing and my boat is fine. I'm experiencing something incredible. Michel Desjoyeaux said that the Vendée Globe meant one problem each day and he was right. Today, I had a problem with my autopilot. A cable needed changing. Two days ago, it was my wind instruments. Yesterday, I repaired a batten and a halyard. I knew the Vendée Globe was tough, but not that tough.” But after the Spanish skipper Costa struggled with a storm and technical problems under Australia, Attanasio and Costa converged under New Zealand and by January 5th the duo were locked in a battle which was to last weeks, making both of their races.

When Attanasio rounded Cape Horn at 2043hrs UTC after 75 days 8 hours and 41 minutes of racing. He was around 100 miles ahead of Didac Costa. Through late January and early February, Attanasio and Costa continued their duel all the way up from Southern Brazil to the North Atlantic.

He re-crossed the Equator at 0409hrs UTC after 92d, 16hrs, 7mins of racing. On 9th February, Attanasio broke his port daggerboard after colliding with an unidentified floating object. He noticed a small ingress of water in the housing and was no longer able to use this daggerboard. A long way west of the Canaries in the middle of the North Atlantic, Costa extended his lead over over Attanasio, who was left 400miles behind in trickier, light winds conditions.

“It wasn't the Vendée Globe I was aiming for or how I thought it would be. I knew I wouldn't be fighting it out with the leaders, but I thought there was a group I could race against. That happened in the Atlantic, but down at the bottom of the South Atlantic, I hit something and there was a horrible noise as the carbon splintered. I thought it was over. I called Sam (Davies), then I repaired it and set off again. But by then the race had changed. The group I was in had made their getaway. So my aim was to finish and not be forced to retire. It's horrible when you have to retire. That stays with you. There are some incredible memories. Highs and lows. The sword of Damocles hangs over you. You wonder what is going to happen all the time. I think Sam really needs to be here in 2020, so she can become the first female winner. She is really made for this race. This is a race like no other.”