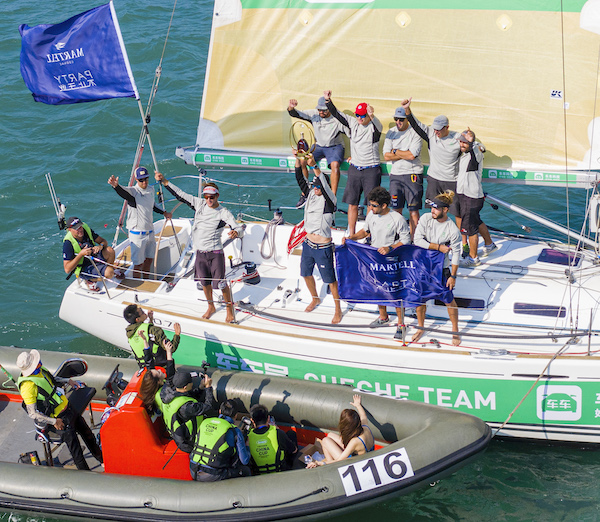 Cheche Team conquered the Beneteau 40.7 one-design fleet at the China Cup International Regatta after a lack of wind meant no racing in Shenzhen on the final day of competition. The only fleet that managed a race on Sunday was in IRC A, with Phoenix winning the race and cementing her place at the top of the podium.

Cheche skipper Rayco Tabares Alvarez and his crew celebrated wildly afterwards, having won four of the seven races in the 40.7s over the past five days. “The best race in the China Cup was day three,” said Tabares. “We really enjoyed the long around the island race because we were ahead from quite early and we won by a good distance in the race.”

Even if there had been a race on the final day, the chances are Forever9 would have stayed in second spot, with a big buffer on either side of the scoreboard for Jono Rankine’s crew.

“We kept a clean sheet this week,” said Rankine. “No big mistakes at the beginning, which meant we could sail a little more conservatively. We had a buffer today, but we would like to have finished on a high, have a good fun race, but it didn't happen unfortunately.”

The next bunch would really like to have engaged in what would have been a close five-way battle for the other place on the podium. As it was, Down Under Racing Team from Western Australia held on to third place, a good improvement from 7th place in last year’s China Cup for Skip Lissiman. As one of the winning crew on board Australia II when the Aussies stole the America’s Cup away from the New York Yacht Club in 1983, Lissiman is a legend in the sport. Now aged 62, he loves the sport more than ever and is delighted to see sailing take off in China.

“This is my second China Cup and it is a great regatta. A wonderful way to showcase the sport in China, extremely well run, fantastic competition from all around the world.” As to his own performance, Lissiman was delighted to get third overall. “We’ve certainly improved on last year, the crew made me look good, and it’s always good to get out on the water with your mates.”

Lissiman beat fellow Western Australian Keith Swinton by a single point. This was Swinton’s first foray into the Beneteau 40.7, one of the professionals brought on board ChinaOne.Ningbo to work with the six young Chinese sailors looking to make their name in the professional racing world.

“That was a really enjoyable week,” said Swinton. “Very good racing, a bit of a shame the conditions didn't play ball today, a little disappointing. It's been an amazing level of progress for the team this week, considering how badly we started and where we've got back to. The Chinese sailors on board have done such a good job. Our crew work and the communication has really improved. We had some really tight racing with the Kiwi team and we outdid them on some of the boathandling, which is amazing considering the communication challenges across two languages.”

Finishing just a point behind ChinaOne.Ningbo on equal points were the Uruguayan winners of race one, Fjord III, who beat the British entry Doubao on tiebreak. Two points back from this duo were the Royal New Zealand Yacht Squadron whose form suggested they might have got back to third place if today’s racing had taken place. Kiwi skipper on Xianliao, Laurie Jury, summed up a week of two contrasting fortunes for New Zealand.

“After a rough start with two black flags in the first two races, it was pretty much game over from then. I think our team did well to come back. In the end we were only four points off third and with two more races at the end I think we might have got on to the podium. Our crew has learned a lot this week. I mean, racing a fleet of twenty 40-foot boats off one start line, you can't get that kind of experience in New Zealand, so it's been a massive opportunity for learning new skills this week.”

In the other divisions, Phoenix won IRC A by four points ahead of Shenzhen Seawolf; in IRC B, Beijing Hongyuan Team beat her nearest rival, Zhen Ao Sailing Team A, by two points. IRC C was won by Yomovo Guangzhou Won-fun Sailing Team who beat Whiskey Jack by a single point. TT won HKPN A, Jingrui Xiongtao Team won HKPN B. Cheese Ronstan Japan was winner of the J/80s and victory in the Bavarian Cruiser 37 went to Bosom Friend.

The prizegiving took place on Sunday evening at the China Cup Race Village. Every year there is a large number of repeat entries and already some are planning their return for next year’s China Cup in November 2020.