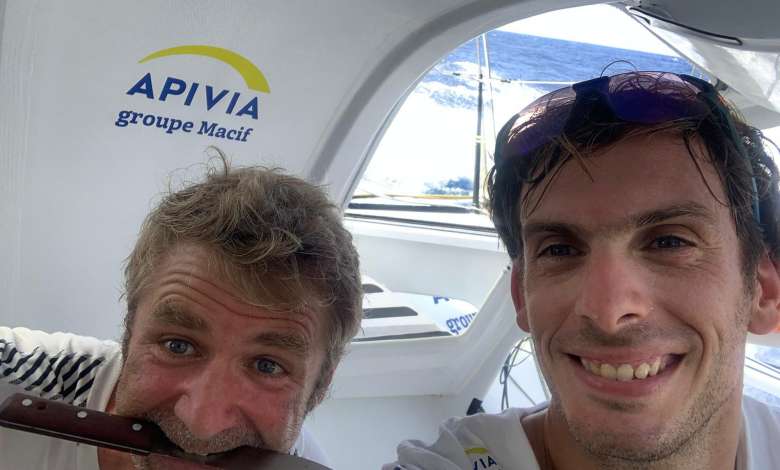 The French duo of Charlie Dalin and Yann Eliès on the latest generation 60ft foiling monohull, Apivia, appeared to be coasting to victory in the Transat Jacque Vabre Normandie Le Havre on Saturday afternoon local time.

At the 15:00 UTC ranking, Apivia, cantering down the north-east coast of Brazil towards the finish line in the Bay of All Saints in Salvador de Bahia, led by 232 miles with just 155 to go. The latest routing continues to have them crossing the line at 02:00 UTC.

“The wind has just softened. So far we’ve had 15/16 knots. We’ve been making 13 knots; we’re slower, but conditions are good, it's smooth. We passed a lot of fishermen during the night. They don’t have AIS, just a small white light, so we spent the night on lookout. We crossed paths with a few cargo ships as well.

“I haven’t made the calculations yet, but I think that after midnight UTC we’ll be outside the bay. We’re trying to look after the boat, but we’ll just play the wind that we get during the day. We’ll stay in race mode until the end! We passed the point where we are closer to the finish than the second boat is to us.

“Am I having fun? Yes, I am indeed. These boats are fun to sail compared to all my years in Figaros. You don’t sail Figaros for the fun of the boat, more for the tactics, strategy and trying to improve your sailing level.

“Here, the IMOCAs are performance boats and at the top of what you can do with a monohull. I’m still amazed at how fast we can sail. Right now, I’m sailing at 22 knots, answering your questions in 16 knots of breeze. It’s just crazy.”

The Inter Tropical Convergence Zone (aka the Doldrums) appears to be significantly loosening its grip compared the situation the IMOCA faced, and is shifting east.

While the Class40 leaders have spent their second night in the Doldrums, the bulk of the fleet that will approach it on Sunday and Monday have every interest in aiming for a fairly western point of entry, with the majority of cloud activity and squalls forecast to be east of the 30th degree of longitude.

On the coast of Bahia, the leaders of the IMOCA fleet are starting to seriously ease the sheets. The wind is almost parallel to the coast over the last 150 miles of the course and we can expect a great battle of the gybes at the end of the course to finally decide the first five places.

IMOCA
At the 15:00 (UTC) ranking behind Apivia the situation is considerably tense.

As expected, Banque Populaire, a 2011 boat without foils, has been passed, three times, and has dropped back to sixth. PRB is hanging on in second with 388 miles to go, but that is enough race track for a charging Charal to catch them. Charal had comfortably the best 24 hours in the fleet, making 448 miles and are 31 miles behind PRB.

American skipper, Charlie Enright, is up to fourth. He is on the charge too in this 2015-generation foiler, 11thHour Racing, but he will have pull some pretty fancy gybes to catch up those in front and hold off another latest generation foiler, Advens for cybersecurity.

They have made a sensational comeback after their Cherbourg pit stop and western strategy and are less than two miles behind Enright.

Britain’s Samantha Davies on Initiatives Cœur, has moved up a place to seventh and they have Banque Populaire in their sights having reduced the deficit to 52 miles. Davies’s boat is the same generation, but upgraded with large foils.

“We’re still full on,” Davies said. “We can see that we’re catching up with the boats in front, we overtook one last night, we’re going as fast we can! They’re (Banque Populaire) a target, it’s an extreme target, but we think it’s possible, so we’re giving it everything we can.”

Meanwhile, freshly into the Doldrums, Finland’s Ari Huusela and Ireland’s Michael Ferguson sent a picture of the moon through their incredibly managed (but thinning) mainsail.

Class40
At the 15:00 (UTC) ranking Crédit Mutuel were managing their lead in the Doldrums, still 51 miles ahead after the second night there. They do not appear to be suffering on Charal: “We're now in the doldrums for the second night,” Britain’s Sam Goodchild wrote in his overnight message after a long period of silence with punishing conditions and the speed of the chase.

“We've had our fair share of squall clouds, rain and then drifting. the gap in Crédit Mutuel is down to 50-odd miles and who gets into the southern hemisphere trade winds first and when will dictate if the gap stays or grows.

Yesterday was, just our second day of the race without having water on the deck, so between the rain clouds we finally got to enjoy drying out and wearing shorts!

The rest of the race to the finish looks relatively simple on paper but we'll be pushing hard to close the gap. You never know where a break could come from so, we're going to be ready to take any opportunities.”

Goodchild, on Leyton, has extended nearly 10 miles to being 33 miles ahead of third-placed Aïna Enfance & Avenir. Behind them a battle royale is raging with six miles separating four boats.