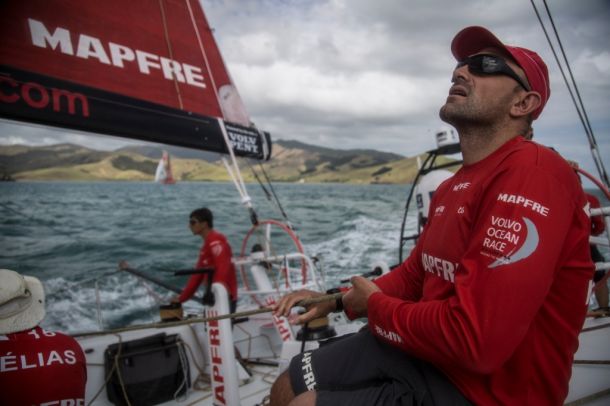 ALICANTE, Spain, March 18 – Iker Martínez (ESP) returned to the helm of MAPFRE to take the first day lead as the closely packed fleet headed out of New Zealand on Wednesday, having been delayed three days by Cyclone Pam.

It is still very early days for the 6,776-nautical mile (nm) Leg 5, the toughest of the race, which is not expected to be concluded until around April 7 in Itajaí, south-east Brazil. However, the Spanish crew continued where they left off after winning Leg 4 from Sanya, China, to Auckland, leading the six boats up the eastern coast of New Zealand’s north island towards East Cape.

Martínez missed legs 3 and 4 to concentrate on pre-Olympic training for Rio 2016, but his stand-in, Xabi Fernández (ESP), did a more than adequate job in his absence as skipper, finishing fourth and first in the red boat.

Winds are currently light – around 10-12 knots – nothing compared with the 35-40 knots the fleet is likely to encounter later in this, the most treacherous leg, which will take them through the Southern Ocean, round Cape Horn, and back into the Atlantic for the first time since November.

After waiting some 67 hours to set sail from Auckland to avoid the threat of Cyclone Pam, which killed at least 11 in the Vanuatu archipelago in the South Pacific, it was seaweed rather than high winds that was the chief problem for two of the fleet. Overall race leaders Abu Dhabi Ocean Racing (Ian Walker/GBR) started well, taking second place early on, before dropping to the back of the fleet.

“We have been fighting poor performance numbers all day. Initially we found weed on the prop leg, which we cleared,” wrote Walker, in a message to shore. “Next we had to clear the rudders and finally we have had to do a full stop to clear weed off the keel. Finally, we seem to be sailing at our targets, but already have over a five-mile deficit to catch up. Far from ideal, but at least we know why.”

Similarly, Team SCA (Sam Davies/GBR), who are still on a high after winning their second in-port race of the series in Auckland last Saturday, were also hampered by seaweed, These are minor irritants, however, and the spread of the fleet at 1240 UTC on Wednesday after the 2000 UTC departure the previous day, was less than 4.5nm.

The fleet is currently heading towards East Cape across the Bay of Plenty in less than 10 knots of breeze, as the boats sailed into their first night at sea.

“After passing East Cape, it will be full on,” says Abu Dhabi Ocean Racing’s Onboard Reporter, Matt Knighton (USA).

Team Vestas Wind Did Not Start