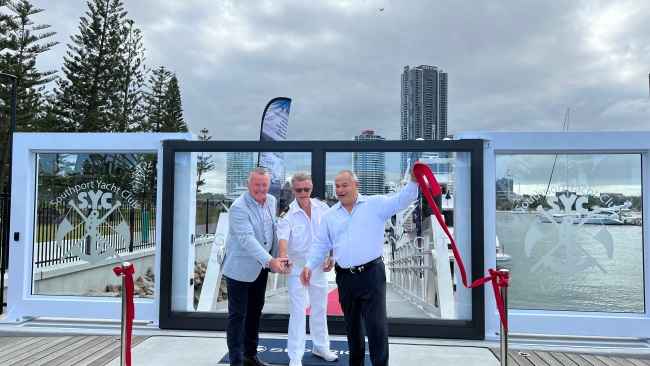 Seen by many as Australia’s most progressive yacht club in recent times, Southport Yacht Club, on Queensland’s Gold Coast, has taken another significant step into the future with the opening of its spectacular megayacht docking facility.

Costing some $9 million to construct, this state-of-the-art floating dock sees the Club align itself with the ‘spare no expense’ international superyacht and megayacht market. It will bring millions of dollars and other benefits to the region on an annual basis. The privately-owned vessels that fit the Megayacht classification can range in size up to 130m in overall length.

More than 600 VIP guests, including representatives of the Queensland government, the Gold Coast’s Mayor, Tom Tate, plus Southport Yacht Club’s Commodore, Ken Tregeagle, and General Manager, Brett James, led the celebrations on the eleven huge concrete pontoons that form the massive facility at the Club.

John Hogan, whose company, Superior Jetties, applied pioneering technology to construct the pontoons, confirmed that the technology used to create the entire dock was a tribute to Australian designers, manufacturers and engineers.

Designer and technician Greg Forgan-Smith said everyone associated with the project deserved recognition.