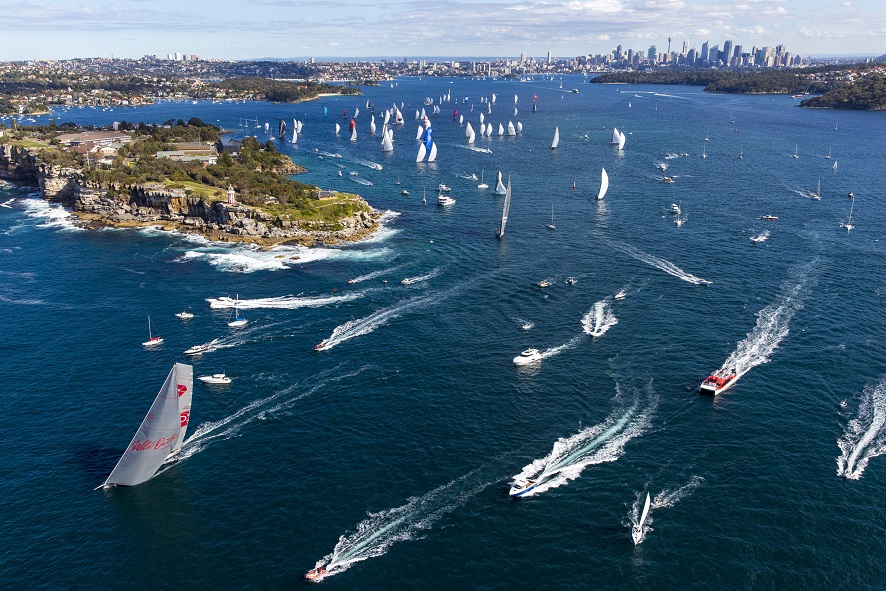 The two entries representing South Australia in the 2016 Land Rover Sydney Gold Coast Yacht Race became early casualties after both sustained bow damage in separate incidents, joining a NSW yacht that was involved in one of those incidents, all three within the first half hour of the race.

Jason Ward was the first to report to Cruising Yacht Club of Australia officials that he was retiring after his near-new Mills 45, Concubine, sustained bow and bow sprit damage when they were left trapped with nowhere to go.

Ward’s wife, Shevaun Bruland said: “There were about seven boats involved because the spectator vessel got in the way. Merlin (David Forbes Kaiko 52 with Joseph Earl skippering) was one of them and also retired. We are so disappointed after coming all this way.”

Geoff Boettcher reported shortly after that his TP52, Secret Mens Business, had also sustained bowsprit damage after exiting the Heads in good shape. After struggling to get their kite down, Boettcher said, “We put up our brand new Code Zero – we haven’t used it before, but we were OK. We were pushing, but without being stupid, when the bobstay went and then the bowsprit, in all the excitement.”

Despite frustration, ‘Boettch’, whose TP52 was looking good against the eight others in the fleet, remained cheerful. The Cruising Yacht Club of South Australia Commodore, where Jason Ward is also a member, Boettcher said they had been looking forward to the race against one of the hottest fleets in years, in which both his boat and Concubine were rated among the favourites.

Meanwhile, Wild Oats XI, the super maxi owned by the Oatley family and skippered by Mark Richards, was first out of Sydney Heads, leaving Scallywag (ex-Ragamuffin 100) in her wake. The two had sailed neck-and-neck down the Harbour under Code Zeros, but just as Seng Huang Lee’s Scallywag gybed off Camp Cove, Wild Oats XI hooked into some pressure and took off.

Close behind Scallywag was Rupert Henry’s JV62, Chinese Whisper, followed by Tony Kirby’s Ker 46, Patrice, sailing between the two headlands, clear of dirty air from the pack, which tended to hug South Head. The unexpected surprise was seeing Shane Kearns’ defending champion, Komastu Azzurro, in the top third of the fleet, keeping pace with the bigger and newer boats, not too far adrift of the three V70’s, which were led by Peter Harburg’s Black Jack.

Kearns’ 35 year-old S&S34 is the smallest and oldest boat in the race, but continues to surprise with her performances. Her most recent success was finishing third overall in the 2015 Rolex Sydney Hobart, winning the ORCi category and Corinthian division. Meanwhile, She, the modified Olsen 40 recently purchased by Philip Bell, was last out of the Head, but only by a smallest margin.

As the Bureau of Meteorology suggested, the going was slow in the first five minutes of the race, but shortly after, the 5 knot wind unexpectedly became 7-8 knots, and those behind the top six or so struggled to hold their kites, dropping them just before South Head, and then res-setting them as they turned north for Southport, with a pod of whales keeping the fleet company.

Chinese Whisper and others reported whale sightings, so if conditions lighten off, and turn north as predicted this evening, at least many can enjoy the pleasure of whale watching.

“Navigators will not be getting any sleep, so we’ll be drinking plenty of coffee,” he said. “It will be very tactical. The first big decision will come on approach to and leaving Seal Rocks. Ideally we’ll be there before sunrise. The next major will be at Coffs Harbour coming into the northerly system.

“We’re in the division with the TP52’s and being the smallest boat there (Patrice is the Ker 46 owned by Tony Kirby), we can keep an eye on what decisions are made. I’ll be very interested to see if anyone breaks away from the pack – makes a big call,” added Bellingham, who navigated Loki to a conventionally ballasted Sydney Gold Coast new race record in 2012.

“It’s all about keeping an eye on the current and positioning for each change. It‘ll be interesting to see who comes out on top. There are so many boats that could do it,” Bellingham ended.