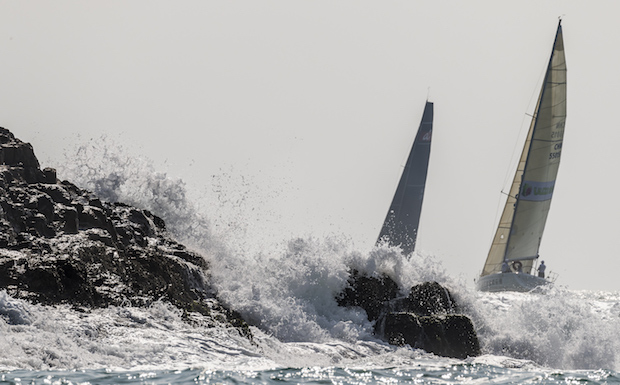 Thursday 16 October 2017, Shenzhen, China : The 11th edition of the China Cup International Regatta opened with the passage race from Hong Kong to Shenzhen today. With around 1,500 sailors from 40 different nations and regions, this event is more international than ever and the competition tougher by the year.

In the hotly contested one-design fleet of Beneteau 40.7s, Ellian Perch’s crew on My Side Team from South Africa threw down the gauntlet by winning their fleet. Yiihua Pocket Emirates Team New Zealand finished second, the Kiwis desperate to win this event at their third attempt. Among the crew are two of the winning America’s Cup crew from earlier this year, Josh Junior and Andy Maloney.

In terms of line honours, Frank Pong’s 75-footer Jelik led the way in a race that saw very light winds from start to finish. Principal race officer Simon James had taken the precaution of putting in two gates on the race course that could also serve as early finish lines if the fleet failed to make it in time to Daya Bay. It was just as well James instigated this fall-back, as most of the fleet only made it to the first gate, so light was the breeze, rarely getting over 5 knots.

In the IRC divisions, it was Standard Insurance Centennial Sailing Team who won Class A, TongJi Blue Sharks-Ocean Link Team who took Class B, and perennial winner Shenzhen Seawolf who won Class C. Seawolf’s tactician Dominic Law said the light airs and rolling swell made it hard to keep the boat moving. “When you were on port heading out to sea, it was difficult sailing into the swell; it was easier on starboard tack. We could see the other boats struggling as they were racing towards the first checkpoint.”

Among those to suffer in today’s fickle conditions was the defending champion in the Beneteau 40.7s, Wanhang Longcheer. “There were seams of breeze that you either got or you didn’t,” said Longcheer’s Australian professional Steve McConaghy. “We didn’t seem to get much luck today, we had boats sailing around either side of us and we were left with nothing.” A sixth place for Longcheer is not a disaster but it’s going to require a strong performance over the next three days of inshore competition if the defending champions are to retain their crown.

Jono Rankine has won this regatta before but knows it’s harder than ever to repeat that feat, especially in the 40.7s. He’s skipper of Cheunk Kong Sailing Team, a mixed crew of professionals and amateurs. “We had a terrible start but we kept on chipping away and found a bit of breeze. We were between 8th and 5th for most of the race, so it was good to end up 4th by the finish.”