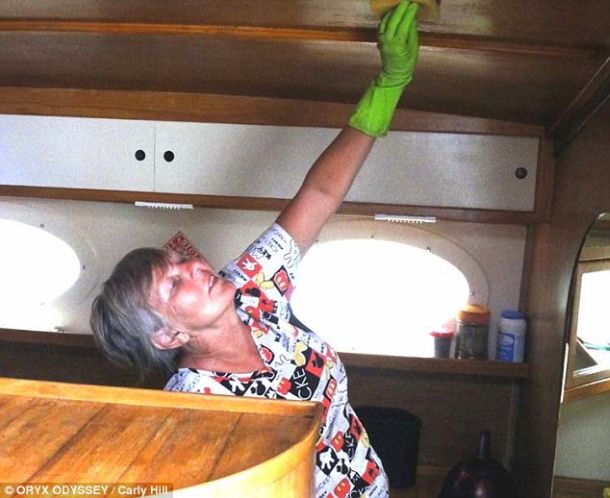 Mrs Hill is thought to have fallen off her yacht near the coast of South Africa while her British husband was sleeping. Photo Oryx Odyssey/Carly Hill.

When Peter and Carly Hill set sail around the coast of South Africa, it was supposed to be just another trip to add to their long list of adventures. But the journey turned into a nightmare when Mr Hill, 65, woke from a nap to find himself alone on the yacht – without a trace of his 58-year-old wife.

An extensive search was launched by both sea and air. But last night family and friends were left only with the hope that Mrs Hill’s body might be recovered after the search was officially called off.

The intrepid couple, who have previously sailed across the Atlantic, left the port of Durban on Thursday, heading for the island of Madagascar. They took turns sleeping while the other steered their 20ft, hand-built catamaran Oryx.
But on Friday lunchtime, distraught Mr Hill, who is originally from Lancashire, raised the alarm that his wife was missing. There was a sea swell of between two and three metres as an extensive search was launched, meaning the water was considered ‘turbulent’.
Read more: http://www.dailymail.co.uk/news/article-3133219/British-husband-frantically-searching-wife-thought-fallen-overboard-yacht-sleeping-couple-sailed-coast-South-Africa.html#ixzz3dlnynQEb