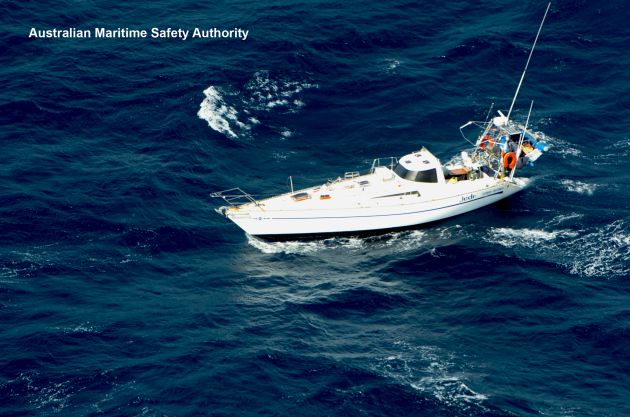 Jedi 1 is located by AMSA.

20/03/2017
Three South African nationals have been rescued from their stricken yacht in the southern Indian Ocean by Royal Australian Navy warship HMAS Parramatta yesterday evening, 18 March 2017, in a search and rescue operation coordinated by the Australian Maritime Safety Authority (AMSA).
AMSA’s Joint Rescue Coordination Centre (JRCC) in Canberra detected a distress beacon registered to the 13 metre yacht Jedi 1 around 7 pm AEDT on Thursday, 17 March.
The yacht was located over 1300 kilometres southwest of Cape Leeuwin in Western Australia on a journey from South Africa to New Zealand.
AMSA deployed its Perth-based Challenger search and rescue jet to the yacht’s location, which arrived on scene around midnight on Thursday and established VHF radio communication with the crew.
The three male crew members of the Jedi 1 confirmed their yacht had been dismasted and their intention to abandon the stricken vessel.
Given the yacht’s remote location, AMSA engaged the Royal Australian Navy for assistance in rescuing the Jedi 1 crew and HMAS Parramatta was deployed shortly after 2 am on Friday, 18 March.
In a second sortie on Friday afternoon, AMSA’s Challenger jet successfully dropped satellite and radio communication equipment to the crew. AMSA maintained regular communication with the crew until the arrival of the HMAS Parramatta at 9 pm on Saturday evening.
HMAS Parramatta’s Seahawk helicopter successfully winched all three crew members to safety and they are reported to be in good health.
Last night’s rescue was the second major yacht rescue coordinated by AMSA in as many weeks, following the rescue of two internationals aboard the sailing vessel Val on 8 March in high seas about 400 kilometres north-east of Sydney.