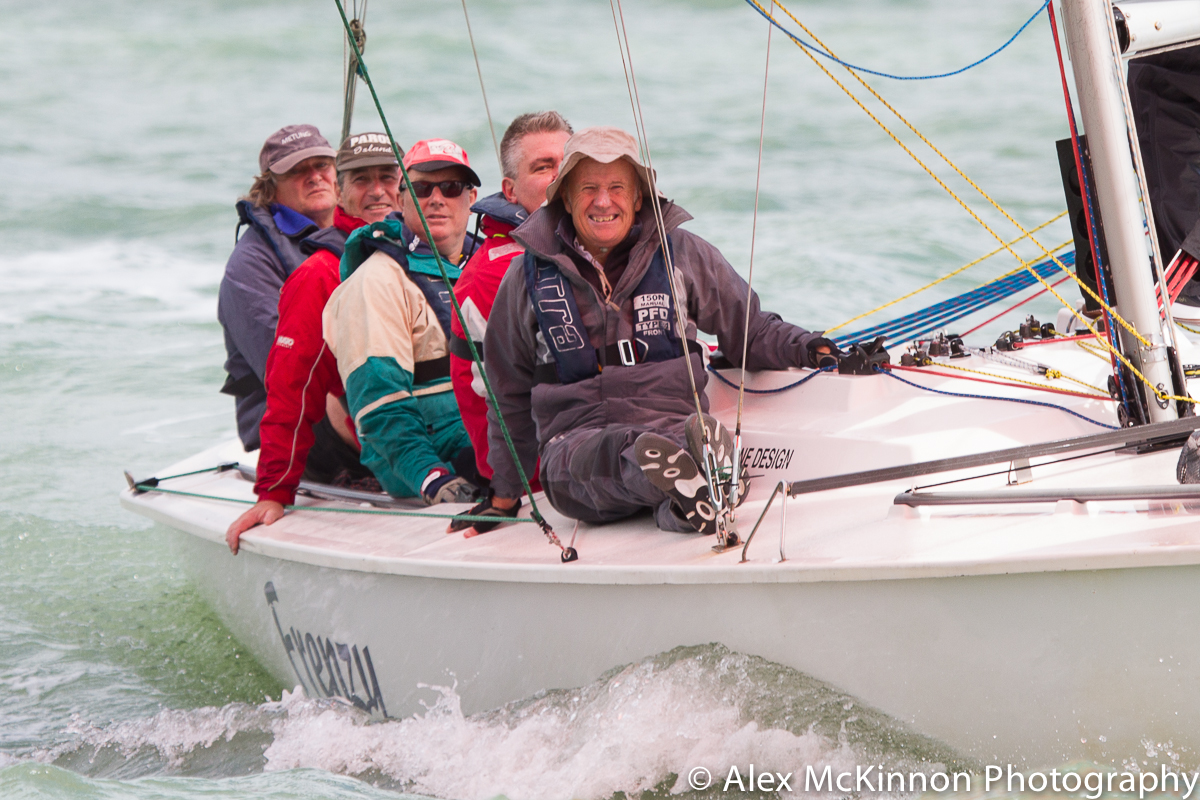 Day Six and the penultimate race day for the 2015-2016 Club Marine Series saw some of the division leaders cement their positions at the top of the table, while in other divisions it will go down to the last race.   Across the White and Blue fleets, there were 71 boats on the race course today.

The March 19 round of the Club Marine Series was hosted by Sandringham Yacht Club and is the annual Keeping Cancer at Bay charity day where all the entry fees go to Challenge – a support group for kids with cancer and their families.  At SYC after the race, there was a BBQ and some tin rattling going on, with all donations going to Challenge.

The breeze varied considerably across the three race areas this afternoon, producing challenging conditions and opportunities to move up (or down) the fleet.

Divisions 0 & 1 started together at 1.30 on the southern course in 18-20 knots of southerly with some stronger gusts.  In the Sandringham dominated Division 0, Terra Firma and Primitive Cool were fastest around the track, but Phil Coombs’ HH42 Simply Fun took the triple crown on IRC, AMS and YV handicap.  With just the one race left to run, Simply Fun has the AMS series all wrapped up, but Veloce (Phil Simpendorfer) is at the top of the IRC and YV tables.

Bruce McCraken’s Beneteau 45 Ikon was first to the top mark and never headed in the Division 1 fleet this afternoon.  Alan Woodward’s Reverie kept within 2 minutes of the leader and managed a race win on PHS handicap, but Ikon took the IRC and AMS honours.  Wicked and Joust were also in the hunt.

“Ikon is a difficult boat to get ahead of”, said Alan Woodward.

“There was plenty of breeze at the start and for the first work.  It softened for the middle of the race then freshened up for the final run.  We did better than some boats by heading offshore on the beats, but altogether it was good clean racing with no incidents”, said the Reverie skipper.

After today’s racing, Ikon sits 3 points ahead of Reverie in the IRC series results and 4.5 points ahead of Joust on AMS.  The YV table is a different matter, with One For The Road (Gary Prestedge) and Joust (Rod Warren) both on 36 points and a number of boats close enough to steal the silverware if the leaders don’t place well in the final race.

Further up the bay, Divisions 2 & 3 sailed on the eastern course where the breeze was closer to 15 knots at the start.

“The course axis was 170 degrees to begin with, but we made a change to 155 as the breeze softened below 10 knots during the middle of the race”, said Race Officer David Leroy.

“The sea state that was left after a few days of strong winds meant that some of the boats were really struggling as the wind dropped out.  In the end, the tail-enders had a fast run home in 20 knots that had come back right again”, he said.

In Division 2, Max Peters’ Adams 10 Top Gun took the gun today, crossing the line nearly a minute ahead of its nearest rival.  That equated to a 3 minute win on IRC handicap and a second place on AMS.  Alchemist, Michael Manson’s Archambault 31, was second to Top Gun on IRC and claimed the win on AMS.

Another “Archie” was also looking dangerous.  Jason Close’s More Noise was helmed by Greg Coutts today and was in the leading group before going inshore on the final beat and losing the pressure enjoyed by other boats out to the right.  It probably cost a couple of places, but More Noise is still on the better part of the IRC and AMS results.

“We have been consistent without being spectacular”, said Jason Close from onshore.

“The series has been very enjoyable to sail and we are happy to be in a good position on IRC.  To be leading on AMS is great”, he said.

In the overall Division 2 series results, Max Peters’ Top Gun has built a 10 point buffer at the top of the IRC table thanks to 5 wins from the last 5 starts.  More Noise has a 5 point lead over Top Gun on AMS handicap and The Bookmaker (Andrew Slagmolen) has a 10.5 point lead over James Heywood’s Adams 10 Serious Yahoo on YV handicap.

The finish of today’s Division 3 race was a nail-biter.  Two Diamonds from Royal Yacht Club of Victoria – Cameron Mead’s Mystery and Callum Brennan’s Lucy in the Sky – were shoulder to shoulder coming in to the finish line.  Lucy crossed a mere second ahead and had the satisfaction of a hard fought line honours win, but fell to third place on YV handicap.  Mystery claimed the win on YV ahead of another RYCV Diamond Rough Cut (Rae Duncan).

Luke Reinehr’s Intrusion from Sandringham claimed the Division 3 IRC win from Imaginer (Chris Byrne), but had to settle for second place on AMS behind George Hooper’s Johnny Be Goode from Royal Melbourne Yacht Squadron.

Race 6 for the Club Marine Blue Series was started from Brighton Tower with 14 boats lining up at 2pm for a fleet start.  Ignazio Parolini’s Republica took the race win from True Colours (Geoff Adams) and Clipper III (Gary Davison) today.  This is three wins on the trot for Rebublica and previous leader Finesse (Nick Knezic) now trails by 3.5 points.

“This has been a great series with a good competitive fleet.  And it was beautiful conditions today”, said Parolini.

“We didn’t use the spinnaker but instead carried our big genoa with a partly furled main.  It worked well and we avoided trouble with the spinnaker. On the second lap we had a big lift inshore and that really helped.  Sometimes it’s making the right choice and sometimes its luck, but that’s sailing”, said Republica’s skipper with a smile.

The next and final instalment of the 2015-2016 Club Marine Series is on Saturday April 9, hosted by Hobson’s Bay Yacht Club.  The on-water action will be followed by the Club Marine Series Presentation Ceremony at Royal Brighton Yacht Club, commencing after racing at approximately 4.30pm.