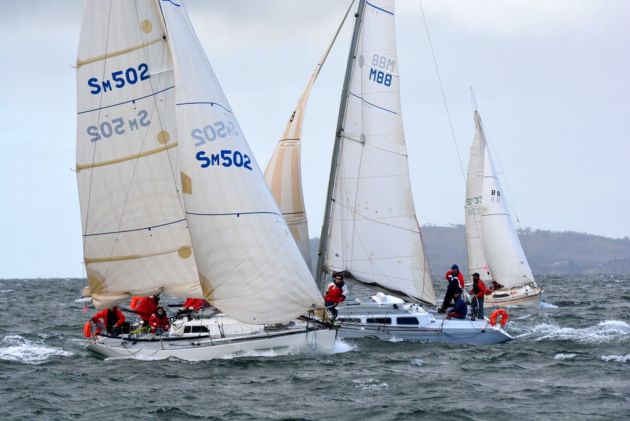 Coromandel 3 and Hot Prospect jostle for the start of a Division 1 race at the North Sails IOR Cup. Hot Prospect was overall winner.Photo Mark Ballard.

The competing boats were mostly vintage 1980s, but they showed they and their crews are still sprightly when 25 of Hobart’s older racing yachts took to the Derwent yesterday for the Bellerive Yacht Club’s second annual North Sails IOR Cup.

The IOR Cup was in many ways a reflection on the duels of the 1980s and 1990s between the world’s major yacht designers for top honours around the world, the Sydney Hobart, Admiral’s Cup and the Half Ton and One Ton Cups. Represented in the fleet included designs by Bruce Farr, Ed Dubois and Tasmania’s own designer Walter Knoop, many of them built to Half Ton and One Ton rules.

Yesterday Bruce Farr designs came out on top in two of the three handicap divisions as the fleet sailed three races in a 15 knot SSW breeze on a chilly autumn day in Hobart (max 15 degrees) with some sharp gusts reaching the high 20 knots.

Two Farr 1104, one of the New Zealand designer’s earliest internationally successful designs, Scott Broadby’s Hot Prospect and Justin Barr’s Rumbeat, battled out Division 1 along with the Dubois designed Black Magic, skippered by BYC Commodore Graham Mansfield. Hot Prospect notched up a 3-1-1 score while Rumbeat placed 1-6-2 and Black Magic had 2-4-5 placings, with results calculated on the PHS handicap system as the IOR rating rule went out of existence many years back. Their success followed the domination of the Combined Clubs summer racing by another Farr 1104, Invincible, which did not contest this series. In the 1995 50th Sydney Hobart Race, Invincible won her division under the then new IMS rules.

Bellerive Yacht Club introduced the IOR Cup to encourage owners of older boats to get out on the water again and race against their peers of 30 to 35 years ago.

Boats designed the old Half Ton rule were prominent in Division 2 with another Farr design, Mako (Jim Bedford) taking honours after a close duel with the Dubois 31 Madman’s Woodyard (Andrew Wise) and Half Hearted (Chad Grafton). Mako won two of the three races yesterday, with the Knoop 31 Silicon Ship winning the other race.

In Division 3, Ian Stewart skippered Trumps, a Westerly Gk24, to a one point overall wins from Vitamansea (Wayne Pitt) and Chyanne (Rhys Jones).

Also included in the IOR Cup regatta for the first time was a Classic Yacht division. Although only two yachts entered it produced some excellent racing between Derek Adams’ Bronzewing and Graeme Woods’ Juana, with Bronzewing winning the series by one point. On corrected times, Bronzewing won two races and finished second in the third.

Bronzewing began life on the Tamar River at Launceston in 1898 as a version of a Thames one-rater but has spent most of sailing life on the Derwent. Current owner Adams describes the now 35-footer as “like grandpa’s axe…over many years and many owners she has undergone many changes to her original hull.”

Juana is a modern version built to the International 8-metre rule which dates back to the early 1900s but retains the classic hull lines and rig.

The North Sails IOR Cup was cut back to three races yesterday after SSW winds gusting to 40 knots churned up the Derwent on Friday, with BYC officials cancelled the planned twilight race to start the regatta.